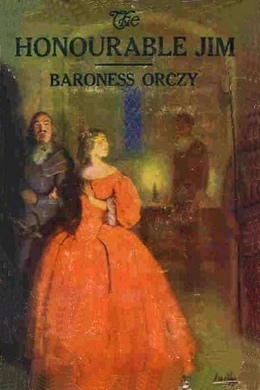 Orczy tells of those three—the woman, and the two men—playmates, enemies, lovers in turn. It seemed well-nigh impossible to attempt the isolation of the one sentimental thread from the tangled skein of passions and of hate which seventeenth century England hath flung to us out of the whirlpool of civil war and of bitter strife. In the midst of the modernisms and aggressive realism of to-day the life and doings of James Fiennes appear intangible, ununderstandable, a mere creation of fancy. But at Broughton Castle where he lived, it is different. There between the splendid grey walls in the stately halls, and along the labyrinthine passages, the intriguing personality of the Honourable Jim at once loses its dream-like quality. In his own old home James Fiennes at once becomes Jim—a real Jim—alive! Oh! Very much alive.

Lord Saye and Sele at Broughton Castle and Squire Brent over at Stoke Lark were still bosom friends when King Charles I came to the throne. They had been at University together, done a tour on the Continent together, and had not yet begun to quarrel over politics, King’s rights, rights of Parliament, illegal taxation and what not. These things were still in their infancy. Prophets said that the air was sultry, croakers added that things could not go on as they had begun, and pessimists concluded that sooner or later a devastating storm would break over this fair land of England, and then only God would know when it would stop and what havoc it would wreak.

But that was still for the future. For the nonce Lord Saye and Sele was content to express his advanced views and to call his old friend a fossil, or King’s lacquey, by way of a jibe, whilst Squire Brent retaliated by alluding to his lordship—always in good part of course—as “that damnable traitor.” But after a heated argument, wherein neither side succeeded in convincing the other, they would finish their bowl of punch together and part the closest of friends.

Lord Saye and Sele had married early—his wife was a Temple of Stow—and when his first boy was born he named him James and vowed that he should wed old Brent’s daughter, whenever that pliant King’s courtier decided to marry in his turn. Now every one in the country knew that when my Lord Saye and Sele set his mind on anything, sooner or later he would have his way. And sure enough the self-same year that Jim was born, Squire Brent did marry the daughter of Master Lame, the wool-prince of Fairford and with her obtained a mightily rich dowry. “Unto him that hath shall be given,” say the Scriptures, and therefore no one could find fault with the fact that the Squire being a wealthy man should wed a wealthy wife.

Of a truth my Lord Saye and Sele was the last to find fault with such an ordination of Providence. His boy Jim was a fine, healthy lad; he would one day be Viscount Saye and Sele, holder of one of the most ancient peerages in the country; he would own Broughton Castle, which had oft extended hospitality to Kings and Queens, but he would not have a deal of money. The future heiress of Stoke Lark, on the other hand, would own broad and vast acres in Oxfordshire and Northamptonshire and a heavy purse well-lined by her plebeian grandfather. And what could be more desirable I ask you than the alliance of an ancient name to a well-filled purse?

But it has been an acknowledged fact throughout the history of mankind that the best laid schemes of men do more often than not “gang agley.” And so it was in this case. Squire Brent married and became passing rich, but his poor wife died from the effects of a hunting accident before she had succeeded in presenting her lord with the future lady of Broughton Castle. It is a fact that Lord Saye and Sele was vastly upset at this untoward event: not only did he join in his friend’s grief, but he did not like Fate thus to interfere with his private schemes. He had set his heart on Jim marrying a rich heiress and bringing wealth and broad acres to the family name and he wanted to make sure that this wish would become an accomplished fact as quickly as may be. The betrothal was to have taken place as soon as the heiress was born, the marriage as soon as the bride reached the age of thirteen. It was unthinkable that such well-laid plans should all at once come to naught.

But not in vain did my lord Saye and Sele bear the reputation of a man who always knew his own mind, and always had his own way. Within twelve months of the death of Mistress Brent, he had persuaded his old friend the Squire that solitude and childlessness were very bad for any man, and that there were any number of comely female children in England, daughters of great families who had more than a quiverful, who were waiting to be legally adopted and by the stroke of a pen transformed into heiresses by wealthy and lonely widowers throughout the country.

So long and so persistently did my lord Saye and Sele counsel and argue, so much did he talk of the patter of tiny feet to liven the loneliness of Stoke Lark, that Squire Brent presently did feel the stirrings of a vague desire for young company, some one to cheer him presently, when old age came creeping on, and that he began to look about him for a suitable female child of rank whom he could adopt and in the course of time make his heiress.