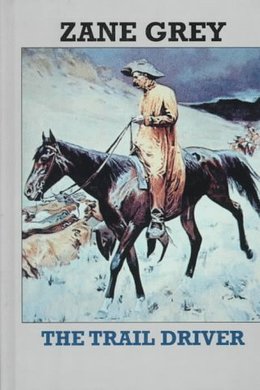 Adam Brite – Texas Joe Shipman – Pan Handle Smith – together with the biggest herd of cattle ever to travel the Chisholm Trail, they were going all the way from San Antonio to Dodge. They expected plenty of trouble. They got it…

That hot summer day in June the Texas town of San Antonio was humming like a drowsy beehive. The year 1871 appeared destined to be the greatest for cattle-drives north since the first one inaugurated by Jesse Chisholm in 1868. During the Civil War cattle had multiplied on the vast Texas ranges by the hundreds of thousands. There was no market. Ranches were few and far between, and the inhabitants very poor. Chisholm conceived the daring idea of driving a herd north to find a market. Despite the interminable distance, the hardships and perils, his venture turned out a success. It changed the history of Texas.

By the spring of 1871 the Chisholm Trail had become a deciding factor in the recovery of Texas. The hoofs of Texas long-horns and Spanish mustangs had worn a mile wide trail across the undulating steppes of the Lone Star State.

Adam Brite had already made one trip this year. Starting in March with twenty-five hundred head of cattle and seven drivers, he had beat the Indians and floods in his most profitable venture. He had started too early for both. The misfortunes of trail drivers following him that year could not dampen his ardor for a second drive. Perhaps he might make three drives this auspicious year. Buying cattle right and left for cash, he had in sight a herd of four thousand five hundred. This would be by far the largest number of long-horns ever collected, let alone driven north. And Brite’s immediate and vital problem was trail drivers.

Five boys were on the way to San Antonio from Uvalde Ranch with a herd, and their services had been secured in the sale. Brite did not care to undertake so big a job without at least ten of the hardest-riding and hardest-shooting drivers on the ranges. To this end he had been a busy man for the single day that he had been back in San Antonio. At Dodge his seven drivers had seemed to vanish as if by magic in the smoke and dust of that wildest of frontier posts. But Brite felt himself particularly fortunate in having secured one of Chisholm’s right-hand drivers for his foreman.

Brite waited for this man, eager and hopeful. His life-long friend, the cattleman Colonel Eb Blanchard, had recommended Texas Joe Shipman, and promised to find him and fetch him around. The afternoon was waning now. Lines of dusty riders were off to the range; the lobby of the Alamo Hotel was thinning out of its booted, spurred, and belted cattlemen; the saloon inside had lost something of its roar. Sloe-eyed Mexicans in colorful garb passed down the street. Brite was about to give up waiting when Colonel Blanchard entered with a young man who would have stood out paramount even among a host of rangy, still-faced, clear-eyed Texans.

“Heah yu air, Adam,” called out Blanchard, cheerily, as he dragged up the tall rider. “Tex, meet my old partner, Adam Brite, the whitest stockman in this State…. Adam, this is Joe Shipman. He rode on my ootfit longer than I can recollect, an’ has made two trips up the Trail. Little the wuss for likker at this time. But never yu mind thet. I vouch for Tex.”

“Hod do, Shipman,” replied Brite, shortly, extending his hand. This rider was tall, wide-shouldered, small-hipped, lithe, and erect. His boldly cut features were handsome. He had tawny hair, eyes of clear amber, singularly direct, and a lazy, cool, little smile. He looked about twenty-four years old.

Brite knew Texans. He required no second look at this stalwart rider to like him, to accept him even without Colonel Blanchard’s recommendation.

“I’ll leave yu to talk it over,” went on Blanchard. “Reckon yu’d do wal to take Tex on right heah.”

“All right, Colonel. Much obliged,” replied Brite. “Come, Shipman, let’s set down…. Have a cigar…. What wages do yu want to be foreman for me on my next drive?”

“Wal, what’ll yu pay?” inquired Shipman, and it was easy to see that he did not care what he got.

“Wal, we cain’t never make it with only ten. There’ll be hell shore up the Trail this summer.”

“I reckon so,” drawled the rider. “Shore swore I’d never go again. I’ve been up three times. Had a Comanche arrer in my shoulder. An’ I’m packin’ lead in my hip.”

“I seen yu walked with a limp. Hurt yore ridin’ any?”

“Wal, nobody ever said nothin’ aboot it if it did.”

“Ahuh. Do yu know any riders yu can hire?”

“I might get my old pard, Less Holden,” replied Shipman, brightening. “No better ever forked a hawse. But Less is the wildest hombre.”