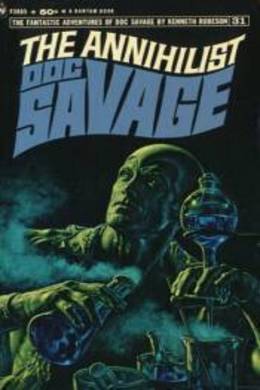 The dread Annihilist was slaughtering the criminals of New York in wholesale lots. Hundreds of men were found mysteriously murdered, victims of the hideous pop-eyed death. The finger of suspicion pointed directly at one man, Doc Savage himself. Even as The Man of Bronze scrambled to solve the terrifying enigma, the invisible assassin began to play havoc with one of humanity’s most important secret defenses — Doc Savage’s legendary crime college.

John Henry Cowlton was the first pop-eyed dead one. Cowlton was a young man who had inherited money, and the newspaper reporters, writing his obituary the next morning, called him a Park Avenue playboy. Cowlton was found in his penthouse gymnasium, and because the gym windows were open and it had been a cold night, his body was frozen only slightly less hard than a rock. There was no mark on John Henry Cowlton’s athletic body. But there was a very peculiar thing wrong with his eyes.

John Henry Cowlton’s eyes were protruding completely from their sockets, and for no good reason that the coroner could find. They were quite horrible, those eyes.

Everett Buckett was the second pop-eyed dead one. They found him in his limousine, which he drove himself. Buckett was a Wall Street operator whose machinations had sometimes moved others to call him “Old Bucket of Blood.” He was worth upward of forty millions of dollars.

There was no mark on his body, but every one who saw his corpse noted the way the eyes stuck out. Not only was this horrible to look at, but it gave the undertaker considerable trouble.

Of course Everett Buckett’s death was connected with that of John Henry Cowlton, on account of the eyes. But the catch was that there was no other connection between the two men, as far as any one knew. They had not even been acquaintances.

Nutty Olsen was the next victim, and they found him in his cheap, filthy room with his eyes all a-pop. Nutty had been in numerous jails and he had a long police record; he was known as an utterly bad character. It was even suspected that he had murdered his mother because the old lady had once turned him over to the police. This had never been proved.

All of these deaths were in Manhattan.

The next one was in the Bronx. By this time, newspapers had started putting the pop-eyed deaths on the front page, and people who had nothing else to do were wondering if some new and mysterious disease might not have sprung up.

The Bronx victim was a lawyer, noted as a very honest man. He had a large family. They heard him screaming in his room. When they reached him, he was spread out on the floor with his eyes sticking out.

The tabloid newspapers began to turn handsprings. They ran big headlines; and the more timid citizens of New York began to look into mirrors frequently to see if anything was wrong with their eyes.

The thing was not a joke. A fifth and sixth man were found dead—one a comfortably fixed insurance man, the other a down-and-out hanger-on in a pool hall—and their eyes were not pleasant things to look at. The seventh was a professor in the city’s largest university.

There was no conceivable connection between any of these men. But they all died with their eyes sticking out.

The police department, urged by the mayor, sent to Chicago for a specialist in strange diseases, for none of the victims showed the slightest mark on their bodies. The conservative New York papers became as wild as the tabloids. They did their best to worry every one.

Certain unnaturally timid persons began to go south to Florida earlier than they had intended. Others went to Europe. Those who had country homes paid them a visit. So far, it was only the timid who were worried. But before long, every one was to feel the terror of it.

They thought it was some new disease. They were wrong. Just how hideously wrong, no one had yet realized. The secret of the whole thing started coming out after what happened at the Association of Physical Health.