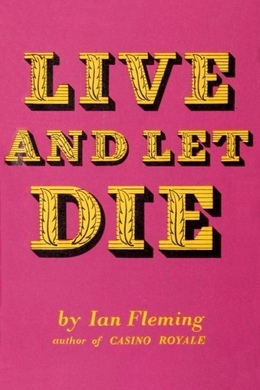 Her hair was black and fell to her shoulders. She had high cheekbones and a sensual mouth, and wore a dress of white silk. Her eyes were blue, alight and disdainful, but, as they gazed into his with a touch of humour, Bond realized that they contained a message. Solitaire watched his eyes on her and nonchalantly drew her forearms together so that the valley between her breasts deepened. The message was unmistakable. Beautiful, fortune-telling Solitaire is the prisoner (and tool) of Mr Big—master of fear, artist in crime and Voodoo Baron of Death. James Bond has no time for superstition—he knows that this criminal heavy hitter is also a top SMERSH operative and a real threat. More than that, after tracking him through the jazz joints of Harlem, to the everglades and on to the Caribbean, 007 has realized that Big is one of the most dangerous men that he has ever faced. And no-one, not even the mysterious Solitaire, can be sure how their battle of wills is going to end…

There are moments of great luxury in the life of a secret agent. There are assignments on which he is required to act the part of a very rich man; occasions when he takes refuge in good living to efface the memory of danger and the shadow of death; and times when, as was now the case, he is a guest in the territory of an allied Secret Service.

From the moment the BOAC Stratocruiser taxied up to the International Air Terminal at Idlewild, James Bond was treated like royalty.

When he left the aircraft with the other passengers he had resigned himself to the notorious purgatory of the US Health, Immigration and Customs machinery. At least an hour, he thought, of overheated, drab-green rooms smelling of last year’s air and stale sweat and guilt and the fear that hangs round all frontiers, fear of those closed doors marked PRIVATE that hide the careful men, the files, the teleprinters chattering urgently to Washington, to the Bureau of Narcotics, Counter Espionage, the Treasury, the FBI.

As he walked across the tarmac in the bitter January wind he saw his own name going over the network: BOND, JAMES. BRITISH DIPLOMATIC PASSPORT 0094567, the short wait and the replies coming back on the different machines: NEGATIVE, NEGATIVE, NEGATIVE. And then, from the FBI: POSITIVE AWAIT CHECK. There would be some hasty traffic on the FBI circuit with the Central Intelligence Agency and then: FBI TO IDLEWILD: BOND OKAY OKAY, and the bland official out front would hand him back his passport with a ‘Hope you enjoy your stay, Mr Bond.’

Bond shrugged his shoulders and followed the other passengers through the wire fence towards the door marked US HEALTH SERVICE.

In his case it was only a boring routine, of course, but he disliked the idea of his dossier being in the possession of any foreign power. Anonymity was the chief tool of his trade. Every thread of his real identity that went on record in any file diminished his value and, ultimately, was a threat to his life. Here in America, where they knew all about him, he felt like a negro whose shadow has been stolen by the witch-doctor. A vital part of himself was in pawn, in the hands of others. Friends, of course, in this instance, but still…

A pleasant-looking nondescript man in plain clothes had stepped forward from the shadow of the Health Service building.

‘My name’s Halloran. Pleased to meet you!’

‘Hope you had a pleasant trip. Would you follow me, please?’

He turned to the officer of the Airport police on guard at the door.

‘Okay, Mr Halloran. Be seeing you.’

The other passengers had passed inside. Halloran turned to the left, away from the building. Another policeman held open a small gate in the high boundary fence.

Directly outside a black Buick waited, its engine sighing quietly. They climbed in. Bond’s two light suitcases were in front next to the driver. Bond couldn’t imagine how they had been extracted so quickly from the mound of passengers’ luggage he had seen only minutes before being trolleyed over to Customs.

Bond sank back luxuriously as the big limousine surged forward, slipping quickly into top through the Dynaflow gears.

He turned to Halloran.

‘Well, that’s certainly one of the reddest carpets I’ve ever seen. I expected to be at least an hour getting through Immigration. Who laid it on? I’m not used to VIP treatment. Anyway, thanks very much for your part in it all.’

‘You’re very welcome, Mr Bond.’ Halloran smiled and offered him a cigarette from a fresh pack of Luckies. ‘We want to make your stay comfortable. Anything you want, just say so and it’s yours. You’ve got some good friends in Washington. I don’t myself know why you’re here but it seems the authorities are keen that you should be a privileged guest of the Government. It’s my job to see you get to your hotel as quickly and as comfortably as possible and then I’ll hand over and be on my way. May I have your passport a moment, please?’

Bond gave it to him. Halloran opened a brief-case on the seat beside him and took out a heavy metal stamp. He turned the pages of Bond’s passport until he came to the US Visa, stamped it, scribbled his signature over the dark blue circle of the Department of Justice cypher and gave it back to him. Then he took out his pocket-book and extracted a thick white envelope which he gave to Bond.