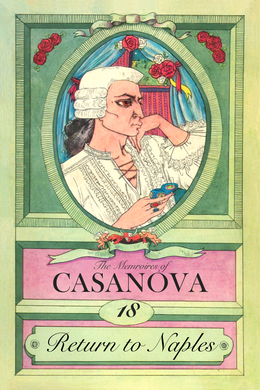 I Arrive At Naples, and the telling of my Short But Happy Stay at Naples. The Duke de Matalone and My Daughter. My Departure and Return to Florence, and My Departure with the Corticelli. My Arrival at Bologna and where I Am Expelled from Modena. I Visit Parma and Turin. My Victory Over the Deputy Chief of Police, and another departure. The Young Boarder, In Lyons and then onto Paris.

Cardinal Passionei received me in a large hall where he was writing. He begged me to wait till he had finished, but he could not ask me to take a seat as he occupied the only chair that his vast room contained.

When he had put down his pen, he rose, came to me, and after informing me that he would tell the Holy Father of my visit, he added,–

“My brother Cornaro might have made a better choice, as he knows the Pope does not like me.”

“I don’t know whether the Pope esteems me, but I am sure he knows I don’t esteem him. I both liked and esteemed him before he was pope, and I concurred in his election, but since he has worn the tiara it’s a different matter; he has shewn himself too much of a ‘coglione’.”

“The conclave ought to have chosen your eminence.”

“No, no; I’m a root-and-branch reformer, and my hand would not have been stayed for fear of the vengeance of the guilty, and God alone knows what would have come of that. The only cardinal fit to be pope was Tamburini; but it can’t be helped now. I hear people coming; good-bye, come again to-morrow.”

What a delightful thing to have heard a cardinal call the Pope a fool, and name Tamburini as a fit person. I did not lose a moment in noting this pleasant circumstance down: it was too precious a morsel to let slip. But who was Tamburini? I had never heard of him. I asked Winckelmann, who dined with me.

“He’s a man deserving of respect for his virtues, his character, his firmness, and his farseeing intelligence. He has never disguised his opinion of the Jesuits, whom he styles the fathers of deceits, intrigues, and lies; and that’s what made Passionei mention him. I think, with him, that Tamburini would be a great and good pope.”

I will here note down what I heard at Rome nine years later from the mouth of a tool of the Jesuits. The Cardinal Tamburini was at the last gasp, and the conversation turned upon him, when somebody else said,–

“This Benedictine cardinal is an impious fellow after all; he is on his death-bed, and he has asked for the viaticum, without wishing to purify his soul by confession.”

I did not make any remark, but feeling as if I should like to know the truth of the matter I asked somebody about it next day, my informant being a person who must have known the truth, and could not have had any motive for disguising the real facts of the case. He told me that the cardinal had said mass three days before, and that if he had not asked for a confessor it was doubtless because he had nothing to confess.

Unfortunate are they that love the truth, and do not seek it out at its source. I hope the reader will pardon this digression, which is not without interest.

Next day I went to see Cardinal Passionei, who told me I was quite right to come early, as he wanted to learn all about my escape from The Leads, of which he had heard some wonderful tales told.

“I shall be delighted to satisfy your eminence, but the story is a long one.”

“All the better; they say you tell it well.”

He rang his bell, and having told one of his gentlemen to send up a seat, a servant brought in a stool. A seat without a back and without arms! It made me quite angry. I cut my story short, told it badly, and had finished in a quarter of an hour.

“I write better than you speak,” said he.

“My lord, I never speak well except when I am at my ease.”

“But you are not afraid of me?”

“No, my lord, a true man and a philosopher can never make me afraid; but this stool of yours … .”

“You like to be at your ease, above all things.”

“Take this, it is the funeral oration of Prince Eugene; I make you a present of it. I hope you will approve of my Latinity. You can kiss the Pope’s feet tomorrow at ten o’clock.”

When I got home, as I reflected on the character of this strange cardinal–a wit, haughty, vain, and boastful, I resolved to make him a fine present. It was the ‘Pandectarum liber unicus’ which M. de F. had given me at Berne, and which I did not know what to do with. It was a folio well printed on fine paper, choicely bound, and in perfect preservation. As chief librarian the present should be a valuable one to him, all the more as he had a large private library, of which my friend the Abbe Winckelmann was librarian. I therefore wrote a short Latin letter, which I enclosed in another to Winckelmann, whom I begged to present my offering to his eminence.

I thought it was as valuable as his funeral oration at any rate, and I hoped that he would give me a more comfortable chair for the future.