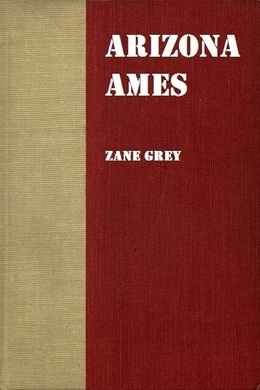 Not all outlaws are bad mend. Rich Ames didn’t set out to be a gunslinger–it was forced on him. When two men roughed up his sweet sister, Rich reached for his trusty Colt and let loose on them. When the smoke cleared, Rich was the only one standing, now a fugitive of the law and forced to abandon his quaint home and family in Tonto Basin. Rich soon acquired the name “Arizona Ames” and for years after that fateful day his name struck fear into the hearts of bad men all over the West. To some people, Arizona was a bad man. Certainly he was quick with a six-gun; to be sure there were many notches in the Colt he threw with such lightning rapidity; but at his core he was a good man, forced into a life of wandering for protecting his kin. Arizona Ames is a classic western full of thrill and adventure, written by the granddaddy of them all–Zane Grey. Join Rich “Arizona” Ames as he travels his home state meting out justice and evading the law.

It was November in the Tonto Basin.

From Mescal Ridge the jagged white teeth of the ranges pierced the blue sky on three horizons—to the west the wild ragged Mazatzals; to the south the lofty symmetrical Four Peaks; and far away to the east the dim blue-white Sierra Ancas. Behind and above Mescal Ridge—forbiddingly close the rarefied atmosphere made it—towered the black-fringed, snow-belted rim of the Mogallan Mesa, blocking the whole north with its three hundred miles of bold promontories and purple canyons.

But though it was winter on the heights, down on the innumerable ridges of the Basin, which slanted like the ribs of a colossal washboard, late fall lingered. In sheltered nooks, deep down where the sun could reach through gaps, sycamores shone with green-gold leaves, and oaks smoldered in rich bronze, standing out vividly from the steel-gray shaggy slopes. Tonto Creek wound down between them, a shining strip of water, here white in rushing rapids and there circling in green eddies or long leaf-spotted pools. The ridge tops waved away from Mescal Ridge, a sea of evergreen, pine and spruce and cedar and piñon, a thick dark mantle in the distance, but close at hand showing bare spots, gray rocks and red cliffs, patches of brown pine needles, scarlet sumac and blue juniper.

Mescal Ridge was high and long and winding and rough, yet its crest curved gracefully, open and bare, covered by many acres of silver grass, where flourished abundantly the short, spiked, pale-green clusters of cactus—mescal, which gave the ridge its name. The tips of mescal leaves narrowed to hard black thorns, much dreaded by cattle and horses. Like the thorns of the cholla cactus, these mescal points broke off in flesh and worked in. Mescal, both in its deadly thorns and the liquor distilled from its heart, typified the hard and acrid nature of the Tonto.

Old Cappy Tanner, trapper, had driven his seven burros in from the south this year; and this time he was later than on any other of the many autumns he had returned to the Tonto. His last two trapping seasons had been prosperous ones, which accounted partly for his late arrival. He had tarried in Prescott and Maricopa to buy presents for his good friends, the Ames family. For Tanner that had been a labor of love, but nevertheless a most perplexing one.

Three miles west of Tonto Creek the trail to Mescal Ridge left the road. Cappy turned into it, glad to reach the last leg of his long tramp. Every giant pine seemed to greet him. He knew them all, and the logs, and the checker-barked junipers, and even the manzanita bushes, bare this year of their yellow berries. No cattle or horse tracks showed in the grass-grown trail. That surprised him. There had been no rain along there for weeks, and if any hoofs had stepped on this trail lately the tracks would have shown.

Cappy sat down against a huge pine to rest and to eat a little bread and meat. The sun shone hot and the shade was pleasant. His burros began to graze on the long grass. It occurred to him that he had rested often on the six weeks’ walk north. He seemed to realize he was a little slower than last year.

The old familiar sough of the wind in the pines was music to him, and the sweet, dry, pungent odor of the evergreens was medicine. What soothing relief and rest after the desert! Cappy watched the burros, the slow shadows of the pine boughs, the squalling blue jays. He had been six months away from the Tonto, and the preceding night, at the tavern in Shelby, he had listened to disturbing gossip that involved his friends and their neighbors, the Tates.

It had occupied his mind all during the eighteen-mile journey from Shelby; to such significance that he had not stopped at Spring Valley to pay his respects to the Tates, an omission they would be sure to note.

“Reckon thet Pleasant Valley war left bitter feelin’ which never will die out,” soliloquized Tanner, wagging his head sadly. He had been in the Tonto during the climax of the terrible feud among cattlemen, sheepmen, and rustlers; and he had seen it end in extermination of every faction. But the heritage of bad blood had descended on the few families left in that wild north section of the Tonto Basin.

Having finished his lunch and rested, Tanner resumed his journey, growing more at ease as he drew farther from the road, deeper into the forest. When he began to catch glimpses of deer and flocks of wild turkeys, and to see where bears had broken the branches of the junipers to feed off the berries, he knew he was getting near home.