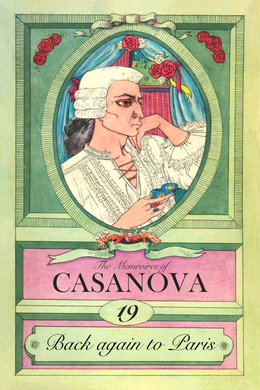 Casanova: Part 19 - Back Again To Paris

My stay at Paris and my departure for Strasburg, where I find the Renaud. My misfortunes at Munich and my sad visit to Augsburg. The girl from Strasburg, the female Count, and before my return to Paris I go to Metz. I returned to Paris with the Corticelli, now Countess Lascaris. I had two objects in speaking thus: I wanted to frighten him and to make him jealous of me. I felt certain that a man in a passion of jealousy would be quite confused, and I hoped his play would suffer accordingly, and that I should not have the mortification of losing a hundred louis to his superior play, though I won the fifty louis of the wager.

My Stay at Paris and My Departure for Strasburg, Where I Find the Renaud–My Misfortunes at Munich and My Sad Visit to Augsburg

At ten o’clock in the morning, cheered by the pleasant feeling of being once more in that Paris which is so imperfect, but which is the only true town in the world, I called on my dear Madame d’Urfe, who received me with open arms. She told me that the young Count d’Aranda was quite well, and if I liked she would ask him to dinner the next day. I told her I should be delighted to see him, and then I informed her that the operation by which she was to become a man could not be performed till Querilinto, one of the three chiefs of the Fraternity of the Rosy Cross, was liberated from the dungeons of the Inquisition, at Lisbon.

“This is the reason,” I added, “that I am going to Augsburg in the course of next month, where I shall confer with the Earl of Stormont as to the liberation of the adept, under the pretext of a mission from the Portuguese Government. For these purposes I shall require a good letter of credit, and some watches and snuff-boxes to make presents with, as we shall have to win over certain of the profane.”

“I will gladly see to all that, but you need not hurry yourself as the Congress will not meet till September.”

“Believe me, it will never meet at all, but the ambassadors of the belligerent powers will be there all the same. If, contrary to my expectation, the Congress is held, I shall be obliged to go to Lisbon. In any case, I promise to see you again in the ensuing winter. The fortnight that I have to spend here will enable me to defeat a plot of St. Germain’s.”

“St. Germain–he would never dare to return to Paris.”

“I am certain that he is here in disguise. The state messenger who ordered him to leave London has convinced him the English minister was not duped by the demand for his person to be given up, made by the Comte d’Afri in the name of the king to the States-General.”

All this was mere guess-work, and it will be seen that I guessed rightly.

Madame d’Urfe then congratulated me on the charming girl whom I had sent from Grenoble to Paris. Valenglard had told her the whole story.

“The king adores her,” said she, “and before long she will make him a father. I have been to see her at Passi with the Duchesse de l’Oraguais.”

“She will give birth to a son who will make France happy, and in thirty years time you will see wondrous things, of which, unfortunately, I can tell you nothing until your transformation. Did you mention my name to her?”

“No, I did not; but I am sure you will be able to see her, if only at Madame Varnier’s.”

She was not mistaken; but shortly afterwards an event happened which made the madness of this excellent woman much worse.

Towards four o’clock, as we were talking over my travels and our designs, she took a fancy to walk in the Bois du Boulogne. She begged me to accompany her, and I acceded to her request. We walked into the deepest recesses of the wood and sat down under a tree. “It is eighteen years ago,” said she, “since I fell asleep on the same spot that we now occupy. During my sleep the divine Horosmadis came down from the sun and stayed with me till I awoke. As I opened my eyes I saw him leave me and ascend to heaven. He left me with child, and I bore a girl which he took away from me years ago, no doubt to punish me for, having so far forgotten myself as to love a mortal after him. My lovely Iriasis was like him.”

“You are quite sure that M. d’Urfe was not the child’s father?”

“M. d’Urfe did not know me after he saw me lying beside the divine Anael.”

“That’s the genius of Venus. Did he squint?”

“To excess. You are aware, then, that he squints?”

“Yes, and I know that at the amorous crisis he ceases to squint.”

“I did not notice that. He too, left me on account of my sinning with an Arab.”

“The Arab was sent to you by an enemy of Anael’s, the genius of Mercury.”

“It must have been so; it was a great misfortune.”

“On the contrary, it rendered you more fit for transformation.”

We were walking towards the carriage when all at once we saw St. Germain, but as soon as he noticed us he turned back and we lost sight of him.

“Did you see him?” said I. “He is working against us, but our genie makes him tremble.”

“I am quite thunderstruck. I will go and impart this piece of news to the Duc de Choiseul to-morrow morning. I am curious to hear what he will say when I tell him.”