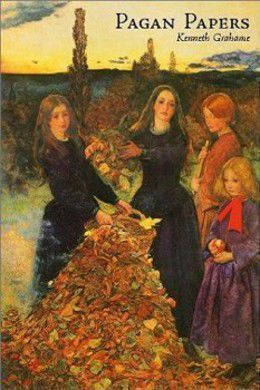 Years before he wrote The Wind in the Willows, Kenneth Grahame published a very different sort of book: Pagan Papers, a wry, witty, wide-ranging collection of eighteen irresistible essays. Strolling, loafing, smoking, collecting books and pondering, the author muses on the human condition. What to do about relatives who are in the way? What is the proper punishment for a bookbinder who takes too long at his job? Are free libraries an unmixed blessing? More seriously: Can nothing make it worth our while not to quarrel with our fellows? Which is more desirable: memory or forgetfulness? Are we irrevocably cut off from the natural world, or might there still be a way back to it?

Among the many places of magic visited by Pantagruel and his company during the progress of their famous voyage, few surpass that island whose roads did literally “go” to places— “ou les chemins cheminent, comme animaulx”: and would–be travellers, having inquired of the road as to its destination, and received satisfactory reply, “se guindans” (as the old book hath it— hoisting themselves up on) “au chemin opportun, sans aultrement se poiner ou fatiguer, se trouvoyent au lieu destiné.”

The best example I know of an approach to this excellent sort of vitality in roads is the Ridgeway of the North Berkshire Downs. Join it at Streatley, the point where it crosses the Thames; at once it strikes you out and away from the habitable world in a splendid, purposeful manner, running along the highest ridge of the Downs a broad green ribbon of turf, with but a shade of difference from the neighbouring grass, yet distinct for all that. No villages nor homesteads tempt it aside or modify its course for a yard; should you lose the track where it is blent with the bordering turf or merged in and obliterated by criss–cross paths, you have only to walk straight on, taking heed of no alternative to right or left; and in a minute ‘tis with you again— arisen out of the earth as it were. Or, if still not quite assured, lift you your eyes, and there it runs over the brow of the fronting hill. Where a railway crosses it, it disappears indeed— hiding Alpheus–like, from the ignominy of rubble and brick–work; but a little way on it takes up the running again with the same quiet persistence. Out on that almost trackless expanse of billowy Downs such a track is in some sort humanly companionable: it really seems to lead you by the hand.

The “Rudge” is of course an exceptional instance; but indeed this pleasant personality in roads is not entirely fanciful. It exists as a characteristic of the old country road, evolved out of the primitive prehistoric track, developing according to the needs of the land it passes through and serves: with a language, accordingly, and a meaning of its own. Its special services are often told clearly enough; but much else too of the quiet story of the country–side: something of the old tale whereof you learn so little from the printed page. Each is instinct, perhaps, with a separate suggestion. Some are martial and historic, and by your side the hurrying feet of the dead raise a ghostly dust. The name of yon town— with its Roman or Saxon suffix to British root— hints at much. Many a strong man, wanting his vates sacer, passed silently to Hades for that suffix to obtain. The little rise up yonder on the Downs that breaks their straight green line against the sky showed another sight when the sea of battle surged and beat on its trampled sides; and the Roman, sore beset, may have gazed down this very road for relief, praying for night or the succouring legion. This child that swings on a gate and peeps at you from under her sun–bonnet— so may some girl–ancestress of hers have watched with beating heart the Wessex levies hurry along to clash with the heathen and break them on the down where the ash trees grew. And yonder, where the road swings round under gloomy overgrowth of drooping boughs— is that gleam of water or glitter of lurking spears?