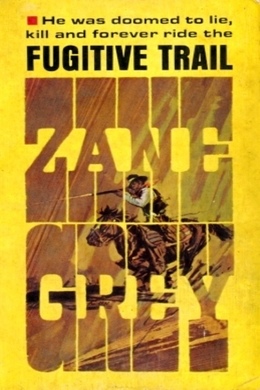 Zane Grey’s bestselling novels have thrilled generations of readers with heart-and-guts characters, hard-shooting action, and high-plains panoramas. To save his cowboy gambler brother, Bruce Lockheart takes to the fugitive trail for a crime he didn’t commit, and is hotly pursued by a relentless ranger and the woman who loves him.

The town was full of trail drivers and laborers just paid off and looking at red liquor. In the back room of Lafe Hennesy’s six men sat at a big round table and played poker for table stakes. Two of them were cowboys making a night of it, and blowing their roll early, one was a stranger in those parts. The gambler, Quade Belton, dark, swarthy, and with sharp eyes, had the biggest pile of silver and gold before him. His sidekick, Steve Henderson, was doing well too. The sixth man was trying hard, and sweating freely, but he was getting trimmed. He was in his twenties, soft of face and hands, obviously not a horseman and, judging from the way he played, not much of a gambler. His name was Barse Lockheart.

Suddenly a few onlookers were shoved aside and a young man stepped up to the table. Except for his hardness and the steel in his eye he was a dead ringer for Barse Lockheart. His voice, when it came, had bite in it.

“Barse, get up! Quit this game pronto!”

The six men looked up, questioning, wary. Barse flushed red. “What the hell’s eatin’ you?” he burst out.

“You’re in bad company. Shake it now,” came the reply.

Henderson banged the table and turned to Barse. “Tell him to go where it’s hot.”

“Bruce, you can go to hell!” shouted Barse. But the wavering of his eyes belied the defiance in his voice.

The stranger looked up at the intruder with a sneer on his lips. “Say, are you your brother’s keeper?”

“You’re damn right—when he keeps company with Steve Henderson and an outfit any trail driver would know is shady as hell.”

All six men flipped their cards on the table. Several chairs scraped back. The two cowboys looked uneasy.

“Lockheart, I resent that,” growled Henderson. “I’ll just have to call you out.”

There was no bravado in Bruce’s cold, matter-of-fact reply. “Don’t make the mistake of trying it.”

The stranger slowly rose from his chair, his right hand crooked low near his gun. Belton pocketed his winnings. The two cowboys left their seats and joined the group of onlookers backing away from the table.

“Mr. Lockheart,” snapped the stranger, “did you include me in the outfit you called shady?”

“I did. But I was flattering you.”

Bruce replied with a smile. “Shady might do for you in this easygoing town. But down on the trail where men are hard you’d be just plain crooked.”

The stranger’s gun was out in a flash, but with the same incredible speed Bruce had drawn his and squeezed the trigger. The bang of his gun seemed to lift the roof and the stranger fell across the table, which upset letting him slump to the floor. A second later Henderson’s gun was out, but he never had a chance to aim as Bruce shot him. The third roar was Henderson’s gun going off in the air as he toppled over backwards.

Bruce backed away, his gun smoking, and was swallowed by the crowd that pressed forward around Henderson. Quade Belton and Barse Lockheart slipped out the door and went for their horses. The older man mounted and turned to the other.

“Are you coming, or does your brother call your shots?”

The sting went home. “My brother can go to hell!” Barse replied angrily. He mounted quickly and rode after Belton into the fading light.