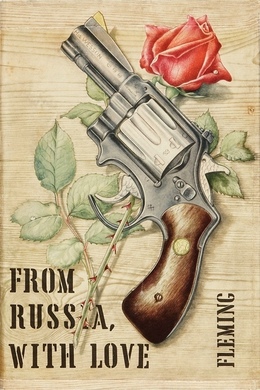 From Russia With Love

SMERSH, the Soviet counterintelligence agency, plans to commit a grand act of terrorism in the intelligence field. For this, it targets British secret service agent James Bond. Due in part to his role in the defeat of Le Chiffre, Mr. Big and Hugo Drax, Bond has been listed as an enemy of the Soviet state and a “death warrant” has been issued for him. His death is planned to precipitate a major sex scandal, which will run through the world press for months and leave his and his service’s reputation in tatters. Bond’s killer is to be SMERSH executioner Red Grant, a psychopath whose homicidal urges coincide with the full moon. Kronsteen, SMERSH’s chess-playing master planner, and Colonel Rosa Klebb, head of Operations and Executions, devise the operation. They persuade an attractive young cipher clerk, Corporal Tatiana Romanova, to falsely defect from her post in Istanbul, claiming to have fallen in love with Bond after seeing his file photograph.

The naked man who lay splayed out on his face beside the swimming pool might have been dead.

He might have been drowned and fished out of the pool and laid out on the grass to dry while the police or the next-of-kin were summoned. Even the little pile of objects in the grass beside his head might have been his personal effects, meticulously assembled in full view so that no one should think that something had been stolen by his rescuers.

To judge by the glittering pile, this had been, or was, a rich man. It contained the typical membership badges of the rich man’s club—a money clip, made of a Mexican fifty-dollar piece and holding a substantial wad of banknotes, a well-used gold Dunhill lighter, an oval gold cigarette case with the wavy ridges and discreet turquoise button that means Fabergé, and the sort of novel a rich man pulls out of the bookcase to take into the garden—The Little Nugget—an old P. G. Wodehouse. There was also a bulky gold wristwatch on a well-used brown crocodile strap. It was a Girard-Perregaux model designed for people who like gadgets, and it had a sweep second-hand and two little windows in the face to tell the day of the month, and the month, and the phase of the moon. The story it now told was 2.30 on June 10th with the moon three-quarters full.

A blue and green dragon-fly flashed out from among the rose bushes at the end of the garden and hovered in mid-air a few inches above the base of the man’s spine. It had been attracted by the golden shimmer of the June sunshine on the ridge of fine blond hairs above the coccyx. A puff of breeze came off the sea. The tiny field of hairs bent gently. The dragon-fly darted nervously sideways and hung above the man’s left shoulder, looking down. The young grass below the man’s open mouth stirred. A large drop of sweat rolled down the side of the fleshy nose and dropped glittering into the grass. That was enough. The dragon-fly flashed away through the roses and over the jagged glass on top of the high garden wall. It might be good food, but it moved.

The garden in which the man lay was about an acre of well-kept lawn surrounded on three sides by thickly banked rose bushes from which came the steady murmur of bees. Behind the drowsy noise of the bees the sea boomed softly at the bottom of the cliff at the end of the garden.

There was no view of the sea from the garden—no view of anything except of the sky and the clouds above the twelve-foot wall. In fact you could only see out of the property from the two upstairs bedrooms of the villa that formed the fourth side of this very private enclosure. From them you could see a great expanse of blue water in front of you and, on either side, the upper windows of neighbouring villas and the tops of the trees in their gardens—Mediterranean-type evergreen oaks, stone pines, casuarinas and an occasional palm tree.

The villa was modern—a squat elongated box without ornament. On the garden side the flat pink-washed façade was pierced by four iron-framed windows and by a central glass door leading on to a small square of pale green glazed tiles. The tiles merged into the lawn. The other side of the villa, standing back a few yards from a dusty road, was almost identical. But on this side the four windows were barred, and the central door was of oak.

The villa had two medium-sized bedrooms on the upper floor and on the ground floor a sitting-room and a kitchen, part of which was walled off into a lavatory. There was no bathroom.

The drowsy luxurious silence of early afternoon was broken by the sound of a car coming down the road. It stopped in front of the villa. There was the tinny clang of a car door being slammed and the car drove on. The doorbell rang twice. The naked man beside the swimming pool did not move, but, at the noise of the bell and of the departing car, his eyes had for an instant opened very wide. It was as if the eyelids had pricked up like an animal’s ears. The man immediately remembered where he was and the day of the week and the time of the day. The noises were identified. The eyelids with their fringe of short sandy eyelashes drooped drowsily back over the very pale blue, opaque, inward-looking eyes. The small cruel lips opened in a wide jaw-breaking yawn which brought saliva into the mouth. The man spat the saliva into the grass and waited.

A young woman carrying a small string bag and dressed in a white cotton shirt and a short, unalluring blue skirt came through the glass door and strode mannishly across the glazed tiles and the stretch of lawn towards the naked man. A few yards away from him, she dropped her string bag on the grass and sat down and took off her cheap and rather dusty shoes. Then she stood up and unbuttoned her shirt and took it off and put it, neatly folded, beside the string bag.