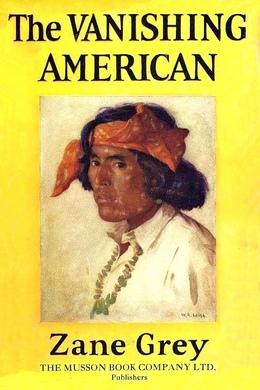 Romance of the American Indian–the tragedy and glory of the race. Considered one of Zane Grey’s best novels, it reveals Grey’s empathy for the Native American and his deep concern for the future survival of that culture. It is the story of Nophaie, a young Navajo, who is picked up by a party of whites at the age of seven. White parents bring the child up as though he were their own, eventually sending him to a prestigious Eastern college where he distinguishes himself by his outstanding athletic skill. The Vanishing American is about Nophaie’s struggle to find a place in society. On a larger scale it is about all Native Americans and their future in America.

At sunrise Nophaie drove his flock of sheep and goats out upon the sage slopes of the desert. The April air was cold and keen, fragrant with the dry tang of the uplands. Taddy and Tinny, his shepherd dogs, had wary eye and warning bark for the careless stragglers of the flock. Gray gaunt forms of wolf and tawny shape of wild cat moved like shadows through the sage.

Nophaie faced the east, where, over a great rugged wall of stone, the sky grew from rose to gold, and a splendor of light seemed about to break upon the world. Nophaie’s instinct was to stand a moment, watching and waiting without thought. The door of each hogan of his people opened to the rising sun. They worshiped the sun, the elements, all in nature.

Motionless he stood, an Indian lad of seven years, slim and tall, with his dark face turned to the east, his dark eyes fixed solemnly upon that quarter whence the light and warmth always came. One thin brown hand held a blanket round his shoulders, and the other clasped his bow and arrows.

While he gazed a wondrous change came over the desert. The upstanding gloomy wall of rock far to the fore suddenly burned with a line of flame; and from that height down upon the gray lowlands shone the light of the risen sun. For Nophaie sunrise was a beginning–a fulfillment of promise–an answer to prayer.

When that blazing circle of liquid gold had cleared the rampart of the desert, too fiery and intense for the gaze of man, Nophaie looked no more, and passed on down the aisles of sage behind his flock. Every day this task was his. For two years he had been the trusted shepherd of his father’s sheep. At five years of age Nophaie had won his first distinction. With other children he was out in charge of the accumulated flocks of the tribe. A sandstorm suddenly swooped down upon the desert, enveloping them in a thick yellow pall. Except Nophaie, all the little shepherds grew frightened and fled back to find their hogans. But Nophaie stayed with the sheep. They could not be driven in the face of the storm. They wandered on and on and became lost. Nophaie became lost with them. Three days later Nophaie’s father found him, hungry and fearful, but true to his charge. He was praised. He was taught. He was trusted. Legend and lore, seldom told so young a boy, were his to ponder and dream over.

Nophaie’s shepherding task was lonely and leisurely. He had but to drive the flock from grassy flat to sage slope, slowly on and on, and back again by sunset to the home corral, always alert for the prowling beasts of prey.

He seemed a part of that red and purple desert land. It was home. He had been born under the shadow of the wonderful mountain wall which zigzagged from east to west across the wasteland. The niches were canyons. Its broken segments were pinnacles and monuments, shafts of red stone lifted to the skies, bold, stark, and mighty, chiseled by wind and sand and frost. Between these walls and monuments spread the sandy floor of desert, always gray-spotted with sage, always gray-green with patches of grass and weed, purple in the distance.

That spring the lambs had come early–too early, considering the frosty breath of the dawns. A few lambs had succumbed to the cold. Many a pink-and-white little lamb had been tenderly folded in Nophaie’s blanket, and warmed, and cared for until the heat of the sun made safe its return to its mother. The lambs and kids were all several days old now, fleecy and woolly, grown sturdy enough to gambol in the sage. A few were solid black, and many were all white, and some had beautiful markings, spots of black on white, and four black feet, and two black ears. One was pure white with a black face; another was all black except for a white tail. The dead stillness of the desert dawn was often pierced by the sweet, high-pitched bleat of these lambs and kids. Nophaie wandered on with them, finding a stone seat from time to time, always watching, listening, feeling. He loved the flock, but did not know that. His task was lonely, but he did not realize it.

The flock leisurely traveled on, a white-dotted moving mass against the background of gray, tearing at the sage, nipping the weeds. Taddy and Tinny trotted to and fro and around, important and morose, Indian dogs that knew their work, and they seldom had to bark a warning. Nophaie leisurely plodded along behind, intent and absorbed. An eagle pitched from his lofty perch on one of the red towers, and shot like a thunderbolt down and over the flock, until he saw the Indian boy on guard, and then he swooped up and up, wide-winged and free, to soar away across the skies, a dark bowed shape against the blue. A coyote wailed his desolate note of hunger. From the cliff a canyon swift trilled his strange, sweet, wild song.