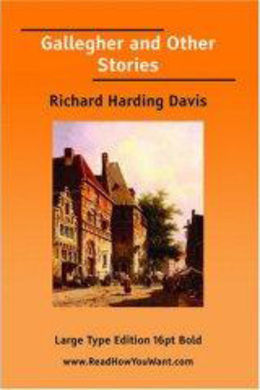 Gallegher And Other Stories Summary: The pity of the whole situation was, that the boy was only a boy with all his man’s miserable knowledge of the world, and the reason of it all was, that he had entirely too much heart and not enough money to make an unsuccessful gambler. If he had only been able to lose his conscience instead of his money, or even if he had kept his conscience and won, it is not likely that he would have been waiting for the lights to go out at Monte Carlo.

We had had so many office–boys before Gallegher came among us that they had begun to lose the characteristics of individuals, and became merged in a composite photograph of small boys, to whom we applied the generic title of “Here, you”; or “You, boy.”

We had had sleepy boys, and lazy boys, and bright, “smart” boys, who became so familiar on so short an acquaintance that we were forced to part with them to save our own self–respect.

They generally graduated into district–messenger boys, and occasionally returned to us in blue coats with nickel–plated buttons, and patronized us.

But Gallegher was something different from anything we had experienced before. Gallegher was short and broad in build, with a solid, muscular broadness, and not a fat and dumpy shortness. He wore perpetually on his face a happy and knowing smile, as if you and the world in general were not impressing him as seriously as you thought you were, and his eyes, which were very black and very bright, snapped intelligently at you like those of a little black–and–tan terrier.

All Gallegher knew had been learnt on the streets; not a very good school in itself, but one that turns out very knowing scholars. And Gallegher had attended both morning and evening sessions. He could not tell you who the Pilgrim Fathers were, nor could he name the thirteen original States, but he knew all the officers of the twenty–second police district by name, and he could distinguish the clang of a fire–engine’s gong from that of a patrol–wagon or an ambulance fully two blocks distant. It was Gallegher who rang the alarm when the Woolwich Mills caught fire, while the officer on the beat was asleep, and it was Gallegher who led the “Black Diamonds” against the “Wharf Rats,” when they used to stone each other to their hearts’ content on the coal–wharves of Richmond.

I am afraid, now that I see these facts written down, that Gallegher was not a reputable character; but he was so very young and so very old for his years that we all liked him very much nevertheless. He lived in the extreme northern part of Philadelphia, where the cotton–and woollen–mills run down to the river, and how he ever got home after leaving the Press building at two in the morning, was one of the mysteries of the office. Sometimes he caught a night car, and sometimes he walked all the way, arriving at the little house, where his mother and himself lived alone, at four in the morning. Occasionally he was given a ride on an early milk–cart, or on one of the newspaper delivery wagons, with its high piles of papers still damp and sticky from the press. He knew several drivers of “night hawks”—those cabs that prowl the streets at night looking for belated passengers—and when it was a very cold morning he would not go home at all, but would crawl into one of these cabs and sleep, curled up on the cushions, until daylight.

Besides being quick and cheerful, Gallegher possessed a power of amusing the Press’s young men to a degree seldom attained by the ordinary mortal. His clog–dancing on the city editor’s desk, when that gentleman was up–stairs fighting for two more columns of space, was always a source of innocent joy to us, and his imitations of the comedians of the variety halls delighted even the dramatic critic, from whom the comedians themselves failed to force a smile.

But Gallegher’s chief characteristic was his love for that element of news generically classed as “crime.” Not that he ever did anything criminal himself. On the contrary, his was rather the work of the criminal specialist, and his morbid interest in the doings of all queer characters, his knowledge of their methods, their present whereabouts, and their past deeds of transgression often rendered him a valuable ally to our police reporter, whose daily feuilletons were the only portion of the paper Gallegher deigned to read.

In Gallegher the detective element was abnormally developed. He had shown this on several occasions, and to excellent purpose.

Once the paper had sent him into a Home for Destitute Orphans which was believed to be grievously mismanaged, and Gallegher, while playing the part of a destitute orphan, kept his eyes open to what was going on around him so faithfully that the story he told of the treatment meted out to the real orphans was sufficient to rescue the unhappy little wretches from the individual who had them in charge, and to have the individual himself sent to jail.

Gallegher’s knowledge of the aliases, terms of imprisonment, and various misdoings of the leading criminals in Philadelphia was almost as thorough as that of the chief of police himself, and he could tell to an hour when “Dutchy Mack” was to be let out of prison, and could identify at a glance “Dick Oxford, confidence man,” as “Gentleman Dan, petty thief.”

There were, at this time, only two pieces of news in any of the papers.