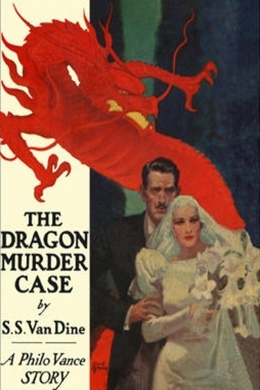 A guest at Inwood Hill Park, an estate in northern Manhattan, dives into the swimming pool and disappears. Has a mythological dragon which is said to prey on the imprudent anythin g to do with the murder? Philo Vance uses his knowledge of both dragons and criminals to demonstrate and solve the case.

That sinister and terrifying crime, which came to be known as the dragon murder case, will always be associated in my mind with one of the hottest summers I have ever experienced in New York.

Philo Vance, who stood aloof from the eschatological and supernatural implications of the case, and was therefore able to solve the problem on a purely rationalistic basis, had planned a fishing trip to Norway that August, but an intellectual whim had caused him to cancel his arrangements and to remain in America. Since the influx of post-war, nouveau-riche Americans along the French and Italian Rivieras, he had forgone his custom of spending his summers on the Mediterranean, and had gone after salmon and trout in the streams of North Bergenhus. But late in July of this particular year his interest in the Menander fragments found in Egypt during the early years of this century, had revived, and he set himself to complete their translation—a work which, you may recall, had been interrupted by that amazing series of Mother-Goose murders in West 75th Street.

However, once again this task of research and love was rudely intruded upon by one of the most baffling murder mysteries in which Vance ever participated; and the lost comedies of Menander were again pigeon-holed for the intricate ratiocination of crime. Personally I think Vance’s criminal investigations were closer to his heart than the scholastic enterprises on which he was constantly embarking, for though his mind was ever seeking out abstruse facts in the realm of cultural lore, he found his greatest mental recreation in intricate problems wholly unrelated to pure learning. Criminology satisfied this yearning in his nature, for it not only stimulated his analytical processes but brought into play his knowledge of recondite facts and his uncanny instinct for the subtleties of human nature.

Shortly after his student days at Harvard he asked me to officiate as his legal adviser and monetary steward; and my liking and admiration for him were such that I resigned from my father’s firm of Van Dine, Davis and Van Dine to take up the duties he had outlined. I have never regretted that decision; and it is because of the resultant association with him that I have been able to set down an accurate and semi-official account of the various criminal investigations in which he participated. He was drawn into these investigations as a result of his friendship with John F.-X. Markham during the latter’s four years’ incumbency as District Attorney of New York County.

Of all the cases I have thus far recorded none was as exciting, as weird, as apparently unrelated to all rational thinking, as the dragon murder. Here was a crime that seemed to transcend all the ordinary scientific knowledge of man and to carry the police and the investigators into an obfuscous and unreal realm of demonology and folk-lore—a realm fraught with dim racial memories of legendary terrors.

The dragon has ever entered into the emotional imaginings of primitive religions, throwing over its conceivers a spell of sinister and terrifying superstition. And here in the city of New York, in the twentieth century, the police were plunged into a criminal investigation which resuscitated all the dark passages in those dim forgotten times when the superstitious children of the earth believed in malignant monsters and the retributive horrors which these monsters visited upon man.

The darkest chapters in the ethnological records of the human race were reviewed within sight of the skyscrapers of modern Manhattan; and so powerful was the effect of these resuscitations that even scientists searched for some biological explanation of the grotesque phenomena that held the country enthralled during the days following the uncanny and incomprehensible death of Sanford Montague. The survival of prehistoric monsters—the development of subterranean Ichthyopsida—the unclean and darksome matings of earth and sea creatures—were advanced as possible scientific explanations of the extraordinary and hideous facts with which the police and the District Attorney’s office were faced.