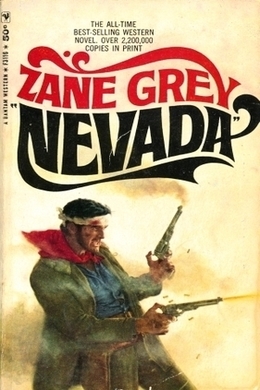 He was called Nevada, a name he took to lose his past. As a boy he had been thrown among brutal and evil men. He had worked himself above their influence time and again, only to be thrown back, by his own desire for justice or vengeance, into the midst of strife. With a new identity he made a new reputation, but old troubles and old enemies haunted him wherever he went. Nevada was the quiet type who would rather work hard and plan for better days. Skilled with a horse and a rope, he could also shoot fast and straight. As he got closer to thinking he could get back to the woman he loved, a gang of rustlers threatened everything. Once again, he had to choose between risks, if his passions didn’t choose for him.

As his goaded horse plunged into the road, Nevada looked back over his shoulder. The lane he had plowed through the crowd let him see back into the circle where the three men lay prostrate. The blue smoke from his gun was rising slowly, floating away. Ben Ide’s face shone white and convulsed in the sunlight.

“So long, Pard!” yelled Nevada, hoarsely, and stood in his stirrups to wave his sombrero high. That, he thought, was farewell forever to this friend who had saved and succored and uplifted him, whom he loved better than a brother.

Then Nevada faced the yellow road down which his horse was racing, and the grim and terrible mood returned to smother the heart-swelling emotion which had momentarily broken it.

There was something familiar and mocking about this precipitate flight on a swift horse, headed for the sage and the dark mountains. How often had he felt the wind sting his face on a run for his life! But it was not fear now, nor love of life, that made him a fugitive.

The last gate of the ranch was open, and Nevada flashed through it to turn off the road into the sage and go flying down the trail along the shore of the lake. The green water blurred on one side of him and the gray sage on the other. Even the winding trail was indistinct to eyes that still saw red. There was no need now for this breakneck ride. To be sure, the officers of the law would eventually get on his track, as they had been for years; but thought of them scarcely lingered a moment in his consciousness.

The action of a swift and powerful horse seemed to be necessary to the whirling of his mind. Thoughts, feelings, sensations regurgitated around that familiar cold and horrible sickness of soul which had always followed the spilling of human blood and which this time came back worse than ever.

The fierce running of the horse along the levels, around the bends of the trail, leaping washes, plunging up and down the gullies, brought into tense play all Nevada’s muscular force. It seemed like a mad race away from himself. Burning and wet all over, he gradually surrendered to physical exertion.

Five miles brought horse and rider far around to the other side of the lake. Here the trail wound down upon the soft sand, where the horse slowed from run to trot, and along the edge of the lake, where the midday sun had thawed the ice. Nevada had a break in his strained mood. He saw the deep hoof tracks of horses along the shore, and the long cuts and scars on the ice, where he and Ben and the freed outlaws had run that grand wild stallion, California Red, to his last plunge and fall. Nevada could not help but think, as he passed that place, and thrill as he remembered the strange lucky catch of the wild horse Ben Ide loved so well. What a trick for fortune to play! How mad Ben had been–to bargain with the rustlers they had captured–to trade their freedom for the aid they gave in running down the red stallion! Yet mad as that act had been, Nevada could only love Ben the more. Ben was the true wild-horse hunter.

Nevada reached the bluff where Forlorn River lost itself in the lake, and climbed the sloping trail to the clump of trees and the cabin where he and Ben had lived in lonely happiness. Ben, the outcast son of a rich rancher of Tule Lake–and he, the wandering, fugitive, crippled gunman, whom Ben had taken in with only one question.

“Where you from?” Ben had asked.

It was all over now. Nevada dismounted from his wet and heaving horse. “Wal, Baldy,” he said, throwing the bridle, “heah we are. Reckon the runnin’s aboot over.” And he sank heavily upon the porch step, pushed his sombrero back to run a hand through his wet hair, smoothing it away from his heated brow. He gazed across the lake toward the dots on the far gray slope–the dots that were the cabins and barns of the Blaine ranch. With the wrench which shook him then, the last of that icy nausea–that cold grip from bowels to heart–released its cramping hold and yielded to the softening human element in Nevada. It would have been better for him if that sinister fixity of mind had not passed away, because with its passing came a slow-growing agony.

“Reckon I cain’t set heah mopin’ like an owl,” soliloquized Nevada, getting up. “Shore, the thing’s done. An’ I wouldn’t have it otherwise…. Dear old Ben!”

But he could not just yet enter the cabin where he had learned the glory of friendship.