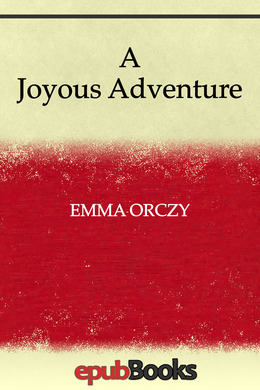 Not a Scarlet Pimpernel novel, but one set in the same universe. Excerpt: This interview had occurred in May in the year 1800. A few months later half a dozen were gathered round a deal table in the low whitewashed room of the _Cabaret du Pélican, a lonely house which stands at the extreme end of the village street of Soulanges. They were eating bread and cheese and drinking cider. The room gave on a side door of the cabaret. It was bare, save for the table, a rickety bench or two and an old-fashioned clock up on the wall. In the corner nearest the door a number of muskets, staves and scythes were propped up. On the table a couple of tallow candles guttered in their pewter sconces._

The Château de la Villorée still stands to-day as it did in this memorable year 1800, and as it had done for several centuries before then. With its four square, crenellated towers, its massive front and iron gates, it dominates the whole of the valley of the Orne. At the foot of the wooded heights the river winds its turbulent way towards the English Channel; the valley here is very narrow, and the heights rise on either side of it, steep and densely wooded on the right, sloping more gently up on the left to the plateau on which the château stands. Its gardens and terraces and parkland had been beautiful once, sumptuous and magnificent in the days, now past, when the Marquis de Marillac de la Villorée was counted one of the greatest gentlemen in France, the friend of kings, the proud aristocrat born and bred in the notion that Almighty God had created French noblemen above the rest of mankind and only one small degree below His angels.

In the days before the Revolution put an end to all the privileges enjoyed by this sacrosanct caste M. le Marquis de la Villorée lived in his château and in his palace in Paris with the pomp and splendour of a royal court. He had servants and retainers, and an army of sycophants around him; when he drove along the roads of Normandy all heads were uncovered–even that of the parish priest–until his carriage had gone by.

Then came the Revolution, and with it the sudden shattering of every illusion of privilege or prerogative. The noble dukes and marquises were rudely awakened from their dream and made to understand that neither their fortunes nor their possessions were secured to them by divine ordinance, and that if they refused to bow their necks to the dictates of this new tyrannical democracy, their lives would pay the price of their arrogance. Noble heads, heads of King, Queen, princes, dukes and countless aristocrats fell beneath the knife of the guillotine like golden ears beneath a labourer’s scythe.

Warned by an anonymous friend of the imminence of arrest on a trumped-up charge of treason, M. le Marquis de Marillac de la Villorée on one evening seven years ago packed hastily together a few necessities, and at dead of night was luckily able to make the coast and there embark on an English ship which took him safely across the Channel. Since then he had lived in exile partly in England, partly in Belgium. A few scattered bits of his once colossal fortune being invested in foreign countries, he was able to render a few minor financial services to his exiled King, and more than one small debt owing by the French royal family to tradespeople in England was paid by M. le Marquis de Marillac.

He had not seen his wife and children for over seven years. Madame la Marquise, with her daughter and two sons, had chosen to remain at La Villorée and never yielded to the temptation of joining her husband in exile. Strong-willed and almost insanely loyal to the monarchical cause in France, she was convinced that within a very little while the forces of law and of tradition would triumph over those of organised murder, outrage and anarchy, and she felt it her duty to remain on the spot among her own people, her husband’s retainers, ready to share their poverty, as well as the many dangers which threatened them through their unswerving loyalty to the cause of the Bourbon kings. She knew well enough that by so doing she risked not only her own life but that of her children, but Mme. la Marquise could be counted more valorous than the Mother of the Gracchi, and certainly more fanatical, for she looked upon René and Alain and even Félise as instruments fashioned by God for the sole purpose of aiding the royal cause.

So she stayed on at La Villorée after most of her kindred and friends had shaken the dust of their country from their shoes. Strangely enough, the tigers of the Revolution passed her by. Once or twice she was molested, threatened even, but it never came to an arrest or the menace of the guillotine–probably because she did not care enough.

“If my death should help the cause of our King,” she had said more than once, “how gladly would I die!”

And she meant every word she said.