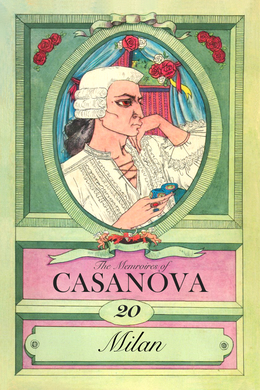 I give up Agatha to Lord Percy and set out for Milan. The Venetian Barbaro humiliation of The Countess. Plan for a Masquerade. My amour with the fair Marchioness. The deserted girl; i become her deliverer. My departure for St. Angelo an ancient castle. I leave Milan with Croce’s Mistress and my arrival at Genoa.

Far from punishing the Corticelli by making her live with Redegonde, the Count d’Aglie seemed to have encouraged her; and I was not sorry for it, since as long as she did not trouble me any more I did not care how many lovers she had. She had become a great friend of Redegonde’s, and did exactly as she pleased, for their duenna was much more easy going than the Pacienza.

Nobody knew of the trick which Lord Percy had played me, and I took care to say nothing about it. However, he did not give up his designs on Agatha, his passion for her was too violent. He hit upon an ingenious method for carrying out his plans. I have already said that Percy was very rich, and spent his money wildly, not caring at what expenditure he gratified his passion. I was the last person to reproach him for his extravagance, and in a country where money is always scarce his guineas opened every door to him.

Four or five days after the ball night, Agatha came to tell me that the manager of the Alexandria Theatre had asked her if she would take the part of second dancer throughout the carnival time.

“He offered me sixty sequins,” she added, “and I told him I would let him know by to-morrow. Do you advise me to accept his offer?”

“If you love me, dearest Agatha, you will prove it by refusing all engagements for a year. You know I will let you want for nothing.

“I will get you the best masters, and in that time you can perfect your dancing, and will be able to ask for a first-class appointment, with a salary of five hundred sequins a year.”

“Mamma thinks that I should accept the offer, as the dancing on the stage will improve my style, and I can study under a good master all the same. I think myself that dancing in public would do me good.”

“There is reason in what you say, but you do not need the sixty sequins. You will dishonour me by accepting such a poor offer, and you will do yourself harm too, as you will not be able to ask for a good salary after taking such a small one.”

“But sixty sequins is not so bad for a carnival engagement.”

“But you don’t want sixty sequins; you can have them without dancing at all. If you love me, I repeat, you will tell the manager that you are going to rest for a year.”

“I will do what you please, but it seems to me the best plan would be to ask an exorbitant sum.”

“You are right; that is a good idea. Tell him you must be first dancer, and that your salary must be five hundred sequins.”

“I will do so, and am only too happy to be able to prove that I love you.”

Agatha had plenty of inborn common sense, which only needed development. With that and the beauty which Heaven had given her her future was assured.

She was eventually happy, and she deserved her happiness.

The next day she told me that the manager did not appear at all astonished at her demands.

“He reflected a few minutes,” said she, “and told me he must think it over, and would see me again. It would be amusing if he took me at my word, would it not?”

“Yes, but we should then have to enquire whether he is a madman or a beggar on the verge of bankruptcy.”

“In that case you would be obliged to accept.”

“That is easily said and easily done, but have I sufficient talent? Where shall I find an actor to dance with me?”

“I will engage to find you one. As to talent, you have enough and to spare; but you will see that it will come to nothing.”

All the time I felt a presentiment that she would be engaged, and I was right. The manager came to her the next day, and offered her the agreement for her signature. She was quite alarmed, and sent for me. I called at her house, and finding the manager there asked him what security he could give for the fulfilment of his part of the engagement.

He answered by naming M. Martin, a banker of my acquaintance, who would be his surety. I could make no objection to this, and the agreement was made out in duplicate in good form.

On leaving Agatha I went to M. Raiberti and told him the story. He shared my astonishment that M. Martin should become surety for the manager whom he knew, and whose financial position was by no means good; but the next day the problem was solved, for in spite of the secrecy that had been observed we found out that it was Lord Percy who was behind the manager. I might still bar the Englishman’s way by continuing to keep Agatha, in spite of his five hundred sequins, but I was obliged to return to France after Easter to wait on Madame d’Urfe, and afterwards, peace having been concluded, I thought it would be a good opportunity for seeing England. I therefore determined to abandon Agatha, taking care to bind her new lover to provide for her, and I proceeded to make a friend of the nobleman.