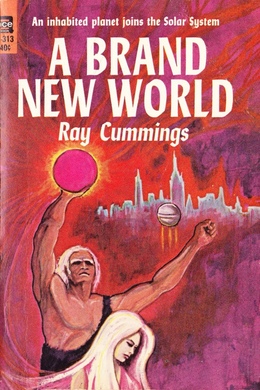 The new planet Caem out of the infinite deeps of insterstellar space, moved in towards the sunlike a comet, and stayed – a new member of the Solar System, between Earth and Venus. Xenephrene it was named and it made a pretty vision in the evening sky … until other things began to appear in the heavens. flying things, strange visitants, myterious lights – and people knew then that they were no longer alone. Xenephrene was inhabited, and its inhabitants were discovering the Earth. But were they coming as friends or as invaders? For trade or for conquest?

The new planet was first observed on the night of October 4, 1966, reported by the Clarkson Observatory, near London. A few hours later the observers at Washington saw it also; and still later, it was found and identified as unknown upon one of the photographic plates of the great refracting telescope at Flagstaff, Arizona. It was not seen by observers at Table Mountain, Cape Town, and the observatory near Buenos Aires, for it was in the northern heavens.

The affair brought a brief mention in the Amalgamated Broadcasters’ report the next day; and the newspapers carried a few lines of it on their pages. Nothing more.

I handled the item. My name is Peter Vanderstuyft. I was twenty-three years old, that autumn of 1966, a newsgatherer for the Amalgamated Broadcasters, attached to the New York City headquarters. The item meant nothing to me. It was the forerunner—the significant, tiny beginning—of the most terrible period of the history of the Earth; but I did not know that. I tossed it over to Freddie Smith, who was with me in the office that night.

But Freddie’s freckled face did not answer my grin. For once his pale blue eyes were solemn. “Professor Vanderstuyft phoned me from Washington awhile ago. It sure seems queer.”

Then he grinned. “Nope. Your father says you’d sell your soul for a news item. When we’ve got anything important to tell the world—we’ll tell you.”

“Go wrap up an electric spark,” I informed him.

He grinned again and went back to studying his interminable blueprints—his “thermodyne principle,” as he called it, for a new heatray motor. Father was financing him for the patents and working model. Freddie was father’s assistant in the Washington Observatory. But he was off duty now in New York arranging for the manufacture of his model.

This was in October. I was tremendously busy. A sensational murder case developed, and I was sent out to Indiana to cover it. A woman had presumably murdered her husband and a couple of children, but it looked as though she were going to be acquitted.

She was a handsome woman, and a good talker. She was taking full advantage of the new law regarding free speech, and every night from the jail she was broadcasting little talks to the public.

October passed, and then November, and still I had not been able to get back to New York. Freddie occupied my rooms there, busy with his invention; father was at his post in Washington, and my sister Hulda was in Puerto Rico, visiting our friends the Cains. Our plans—father’s and mine—were to join the Cains and Hulda in Puerto Rico for Christmas.

Father was leaving the Washington Observatory to assume charge of the Royal Dutch Astronomical Bureau, which had just completed an observatory in extreme Southern Chile, with the largest telescope in the world soon to be installed there. Freddie Smith was going with him as his assistant; and the A.B. Association had appointed me their representative, to live down there also.

None of these plans worked out, however. Christmas approached, and I was still engaged in Indiana with this accursed broadcasting murderess. And father wired me that he was too busy in Washington to leave.

During all these weeks there had been continual items in the news concerning the new planet—issued by father’s Washington staff, and by most of the observatories in the northern hemisphere. Father is a queer character; the Holland blood in us makes us phlegmatic, silent, and cautious—characteristics which apply more to father than to me. He is a true scientist, calmly judicial, unwilling to judge anything or form any decisive opinion without every possible fact before him.

Thus it was that during those weeks neither Hulda in Puerto Rico nor I had an intimation from father of the startling things he was learning. As he said finally, of what use to worry us until he was sure? Like the public in general, I became aware of conditions gradually. A news item here and there—items growing more insistent as the weeks passed, but still all crowded aside to make room for the sensational murder trial.

I recall some of the items. The new planet was approaching the general region of our solar system with extraordinary velocity. A planet of the fortieth magnitude. Then they said it was the thirtieth. Soon it was visible to the naked eye. I remember reading one account, not long after the planet’s discovery, in which its spectrum was reported to be sunlight! Our own solar spectrum! Reflected sunlight! This was no distant, gigantic, incandescent star blazing with its own light. It was not large and far away, but small and close. As small as our own Earth, and already it was within the limits of our solar system. A dark globe, like our Earth, or the moon, or Venus and Mars—dark and solid, shining only reflected sunlight!