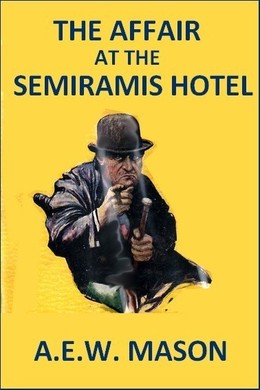 The Affair at the Semiramis Hotel

A young, wealthy vagabond English man, Calladine, whom Ricardo knew before, hastily comes to Ricardo’s London home in the morning, while Hanaud happens to be visiting. Calladine, very agitated, still dressed formally as for an evening ball, tells his disturbing story– He had gone to a costume party that night in a hotel ballroom, met a beautiful young woman, Joan Carew, with whom he danced, dined, and talked.

While dancing, Joan’s eyes fixed upon a stout costumed lady, obviously wealthy. Calladine was puzzled, but didn’t ask why the fascination with that woman. Joan and Calladine leave the party and Joan runs off at 1:30am. A few hours later, Joan appears at Calladine’s apartment door, very distressed. He lets her in. She tells her story about being obsessed with the pearls the lady wore; about finding the lady’s dropped key to her hotel suite; about sneaking into the room at night to steal the pearls but being surprised by other thieves already in the dark room, who grabbed her and tied her as she fell unconscious; about awakening in the early morning and finding herself untied, on the couch, with the wealthy lady motionless in bed, apparently dead; then fleeing, seeking Calladine’s help.

Ricardo and Hanaud accompany Calladine to his home. While Calladine showers, Hanaud finds hidden beans of mescal, a hallucinogenic plant. On the mantle, there is a porcelain figurine of a woman looking exactly as Calladine described Joan. Hanaud’s astute mind wonders, was Calladine’s story truth or a fantasy imagined in a vivid mescaline dream? He and Ricardo then endeavor to solve this mystery.

Mr. Ricardo, when the excitements of the Villa Rose were done with, returned to Grosvenor Square and resumed the busy, unnecessary life of an amateur. But the studios had lost their savour, artists their attractiveness, and even the Russian opera seemed a trifle flat. Life was altogether a disappointment; Fate, like an actress at a restaurant, had taken the wooden pestle in her hand and stirred all the sparkle out of the champagne; Mr. Ricardo languished–until one unforgettable morning.

He was sitting disconsolately at his breakfast-table when the door was burst open and a square, stout man, with the blue, shaven face of a French comedian, flung himself into the room. Ricardo sprang towards the new-comer with a cry of delight.

He seized his visitor by the arm, feeling it to make sure that here, in flesh and blood, stood the man who had introduced him to the acutest sensations of his life. He turned towards his butler, who was still bleating expostulations in the doorway at the unceremonious irruption of the French detective.

“Another place, Burton, at once,” he cried, and as soon as he and Hanaud were alone: “What good wind blows you to London?”

“Business, my friend. The disappearance of bullion somewhere on the line between Paris and London. But it is finished. Yes, I take a holiday.”

A light had suddenly flashed in Mr. Ricardo’s eyes, and was now no less suddenly extinguished. Hanaud paid no attention whatever to his friend’s disappointment. He pounced upon a piece of silver which adorned the tablecloth and took it over to the window.

“Everything is as it should be, my friend,” he exclaimed, with a grin. “Grosvenor Square, the Times open at the money column, and a false antique upon the table. Thus I have dreamed of you. All Mr. Ricardo is in that sentence.”

Ricardo laughed nervously. Recollection made him wary of Hanaud’s sarcasms. He was shy even to protest the genuineness of his silver. But, indeed, he had not the time. For the door opened again and once more the butler appeared. On this occasion, however, he was alone.

“Mr. Calladine would like to speak to you, sir,” he said.

“Calladine!” cried Ricardo in an extreme surprise. “That is the most extraordinary thing.” He looked at the clock upon his mantelpiece. It was barely half-past eight. “At this hour, too?”

Ricardo started in his chair. He began to dream of possibilities; and here was Hanaud miraculously at his side.

“Where is Mr. Calladine?” he asked.

“I have shown him into the library.”

But he was in no hurry. He sat and let his thoughts play with this incident of Calladine’s early visit.

“It is very odd,” he said. “I have not seen Calladine for months–no, nor has anyone. Yet, a little while ago, no one was more often seen.”

He fell apparently into a muse, but he was merely seeking to provoke Hanaud’s curiosity. In this attempt, however, he failed. Hanaud continued placidly to eat his breakfast, so that Mr. Ricardo was compelled to volunteer the story which he was burning to tell.

“Drink your coffee, Hanaud, and you shall hear about Calladine.”

Hanaud grunted with resignation, and Mr. Ricardo flowed on:

“Calladine was one of England’s young men. Everybody said so. He was going to do very wonderful things as soon as he had made up his mind exactly what sort of wonderful things he was going to do. Meanwhile, you met him in Scotland, at Newmarket, at Ascot, at Cowes, in the box of some great lady at the Opera–not before half-past ten in the evening there–in any fine house where the candles that night happened to be lit. He went everywhere, and then a day came and he went nowhere. There was no scandal, no trouble, not a whisper against his good name. He simply vanished. For a little while a few people asked: ‘What has become of Calladine?’ But there never was any answer, and London has no time for unanswered questions. Other promising young men dined in his place. Calladine had joined the huge legion of the Come-to-nothings. No one even seemed to pass him in the street. Now unexpectedly, at half-past eight in the morning, and in evening dress, he calls upon me. ‘Why?’ I ask myself.”

Mr. Ricardo sank once more into a reverie. Hanaud watched him with a broadening smile of pure enjoyment.

“And in time, I suppose,” he remarked casually, “you will perhaps ask him?”

Mr. Ricardo sprang out of his pose to his feet.

“Before I discuss serious things with an acquaintance,” he said with a scathing dignity, “I make it a rule to revive my impressions of his personality. The cigarettes are in the crystal box.”

“They would be,” said Hanaud, unabashed, as Ricardo stalked from the room. But in five minutes Mr. Ricardo came running back, all his composure gone.