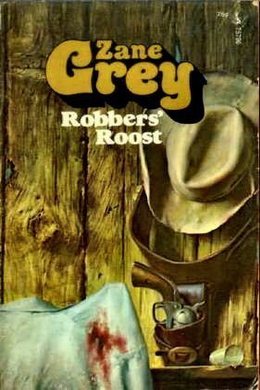 While a battle rages between two outlaw gangs in a remote Utah canyon, Jim struggles to rescue Helen Herrick, who has been captured and held for ransom. Robbers’ Roost tells the story of their personal struggle to escape the clutches of the murderous outlaws while simultaneously safeguarding their passion, one that is not likely to survive the beautiful, yet deadly, terrain and people of the old American West.

One afternoon in the spring of 1877 a solitary horseman rode down the long, ghastly desert slant toward the ford at Green River.

He was a young man in years, but he had the hard face and eagle eye of one matured in experience of that wild country. He bestrode a superb bay horse, dusty and travel-worn and a little lame. The rider was no light burden, judging from his height and wide shoulders; moreover, the saddle carried a canteen, a rifle, and a pack. From time to time he looked back over his shoulder at the magnificent, long cliff wall, which resembled a row of colossal books with leaves partly open. It was the steady, watchful gaze of a man who had left events behind him.

At length he rode into a trail and soon came in sight of the wide band of green cottonwood, willow, and arrowweed, and the shining, muddy river, which had evidently broken through the great wall of stone. On the far side, up on the level, stood a green patch and a cluster of houses, strangely lonely in that environment. This was the town of Green River, Utah.

The rider needed to reach that town before dark. His food supply had run out two days ago. But unless there was a boat in which he could row across, he would most likely not make it. His horse was too lame to risk in that heavy, swirling, sand-laden river.

He rode on down the trail to enter the zone of green. In the thick dust he noted fresh horse tracks. Dust rose in clouds from under his animal’s hoofs. The arrowweed reached to his saddle and was yellow with it. And when he came to the willows and cottonweeds he found their fresh green similarly powdered. It had not rained for a long time in that section. Yet now the odor of dust appeared to yield to that of fresh, cool water.

Under a cottonwood, some distance ahead, the rider espied a saddled horse, head down, cropping the grass. He proceeded more slowly, his sharp eyes vigilant, and was certain that he saw a man on the river bank before that worthy espied him.

Presently he rode out into an opening from which he could see a place where a ferry touched. A rude cable above his head, attached to a cottonwood, stretched across the river, sagging in the middle. Moored to the opposite bank was the ferryboat.

The rider sat his horse, aware that the man he had observed had stepped behind some willows. Such a move might have been casual. Then the man moved out into plain sight.

“Howdy!” replied the rider. He became aware of a penetrating scrutiny which no doubt resembled his own. Chance meeting at that period was productive of obvious though not offensive curiosity. The rider saw a striking figure of a man, gray with dust, booted and spurred, armed to the teeth. His wide sombrero shadowed a sharp, bold face, the only distinct feature of which was a long, sandy mustache. From the shadow, which resembled a mask, there came a gleam of pale, deep eyes.

“Aimin’ to cross?” he queried.

“Yes. I see a ferryboat over there.” But on the moment the rider was watching his questioner. Then he swept a long leg over the pommel and slid to the ground, without swerving in the slightest from a direct front. “Lucky for me if I can cross on it. My horse is all in.”

“Noticed thet. Fine hoss. Wal, I’ve been hangin’ around for an hour, waitin’ to go over. Reckon he’ll be along soon.”

“Where you hail from?”

“I suppose I might as well say Wyoming as any place,” returned the rider, casually.

The other man relaxed with a laugh.

“Shore. One place is good as another. Same as a name. Mine is Hank Hays.” He spoke as if he expected it to be recognized, but it caused no reaction in his listener.

“You know this country?” queried the rider, and he too relaxed.

“Maybe you can tell me whether I ought to stop or keep on traveling?” inquired the rider, coolly.

“Haw! Haw! I shore can. But thet depends,” he said, pushing back his sombrero. The action brought into view a bold visage.

To the rider it was like a printed page, with only the narrow, gray, searching eyes presenting any difficulty.

“Depends on what?” he asked.

“Huh! You can’t go in the ranch business with thet. Not regular ranchin’. Lots of cattle between here an’ the breaks of the Dirty Devil. Henry Mountains, too. Some outfit over there.”

“About half an’ half. This is Utah, but not strong on Mormons over here. Air you a cattleman?”

“No,” replied the rider, thoughtfully.

“Wal, thet’s straight talk from a stranger,” replied Hays, who evidently took the blunt denial as something significant. “Hullo! Another rider…. Shore the desert is full of strangers today.”

Back up the trail appeared a short, heavy man astride a horse and leading two pack-animals.