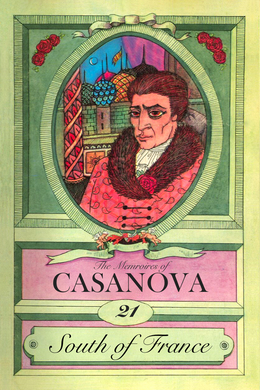 I find Rosalie happy. The signora Isola-Bella, the Cook, Biribi and Irene. Possano is imprisoned Prison. My niece proves to be an old friend of Rosalie’s. The disgraceful behaviour of my brother, the Abbe, I relieve him of his mistress. I depart from Genoa and meet the Prince of Monaco before out arrival at Antibes. After mMy arrival at Marseilles, my niece is welcomed by Madame Audibert and I finally get rid of my brother and Possano.

At Genoa, where he was known to all, Pogomas called himself Possano. He introduced me to his wife and daughter, but they were so ugly and disgusting in every respect that I left them on some trifling pretext, and went to dine with my new niece. Afterwards I went to see the Marquis Grimaldi, for I longed to know what had become of Rosalie. The marquis was away in Venice, and was not expected back till the end of April; but one of his servants took me to Rosalie, who had become Madame Paretti six months after my departure.

My heart beat fast as I entered the abode of this woman, of whom I had such pleasant recollections. I first went to M. Paretti in his shop, and he received me with a joyful smile, which shewed me how happy he was. He took me to his wife directly, who cried out with delight, and ran to embrace me.

M. Paretti was busy, and begged me to excuse him, saying his wife would entertain me.

Rosalie shewed me a pretty little girl of six months old, telling me that she was happy, that she loved her husband, and was loved by him, that he was industrious and active in business, and under the patronage of the Marquis Grimaldi had prospered exceedingly.

The peaceful happiness of marriage had improved her wonderfully; she had become a perfect beauty in every sense of the word.

“My dear friend,” she said, “you are very good to call on me directly you arrive, and I hope you will dine with us to-morrow. I owe all my happiness to you, and that is even a sweeter thought than the recollection of the passionate hours we have spent together. Let us kiss, but no more; my duty as an honest wife forbids me from going any further, so do not disturb the happiness you have given.”

I pressed her hand tenderly, to skew that I assented to the conditions she laid down.

“Oh! by the way,” she suddenly exclaimed, “I have a pleasant surprise for you.”

She went out, and a moment afterward returned with Veronique, who had become her maid. I was glad to see her and embraced her affectionately, asking after Annette. She said her sister was well, and was working with her mother.

“I want her to come and wait on my niece while we are here,” said I.

At this Rosalie burst out laughing.

“What! another niece? You have a great many relations! But as she is your niece, I hope you will bring her with you to-morrow.”

“Certainly, and all the more willingly as she is from Marseilles.”

“From Marseilles? Why, we might know each other. Not that that would matter, for all your nieces are discreet young persons. What is her name?”

“I daresay you don’t. She is the daughter of a cousin of mine who lived at Marseilles.”

“Tell that to someone else; but, after all, what does it matter? You choose well, amuse yourself, and make them happy. It may be wisdom after all, and at any rate I congratulate you. I shall be delighted to see your niece, but if she knows me you must see that she knows her part as well.”

On leaving Madame Paretti I called on the Signora Isola-Bella, and gave her the Marquis Triulzi’s letter. Soon after she came into the room and welcomed me, saying that she had been expecting me, as Triulzi had written to her on the subject. She introduced me to the Marquis Augustino Grimaldi delta Pietra, her ‘cicisbeoin-chief’ during the long absence of her husband, who lived at Lisbon.

The signora’s apartments were very elegant. She was pretty with small though regular features, her manner was pleasant, her voice sweet, and her figure well shaped, though too thin. She was nearly thirty. I say nothing of her complexion, for her face was plastered with white and red, and so coarsely, that these patches of paint were the first things that caught my attention. I was disgusted at this, in spite of her fine expressive eyes. After an hour spent in question and reply, in which both parties were feeling their way, I accepted her invitation to come to supper on the following day. When I got back I complimented my niece on the way in which she had arranged her room, which was only separated from mine by a small closet which I intended for her maid, who, I told her, was coming the next day. She was highly pleased with this attention, and it paved the way for my success. I also told her that the next day she was to dine with me at a substantial merchant’s as my niece, and this piece of news made her quite happy.