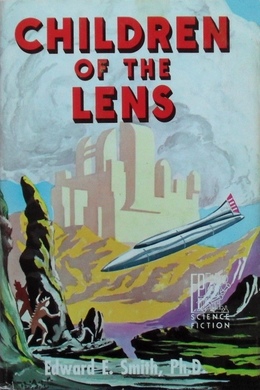 Children Of The Lens

It was beginning to look as if no one could prevent the destruction of the Universe. For a strange intelligence was directing the destruction of all civilization from the icy depths of space. Kim Kinnison of the Patrol was one of the few men who knew how near the end was. And in the last desperate plan to save all life, he knew he had to use his children as bait for the evil powers of the planet Ploor.

Galactic Coordinator Kimball Kinnison finished his second cup of Tellurian coffee, got up from the breakfast table, and prowled about in black abstraction. Twenty-odd years had changed him but little. He weighed the same, or a few pounds less; although a little of his mass had shifted downward from his mighty chest and shoulders. His hair was still brown; his stern face was only faintly lined. He was mature, with a conscious maturity no young man can know.

“Since when, Kim, did you think you could get away with blocking me out of your mind?” Clarrissa Kinnison directed a quiet thought. The years had dealt as lightly with the Red Lensman as with the Gray. She had been gorgeous; she was now magnificent. “This room is shielded, you know, against even the girls.”

“I know,” she laughed. “Automatic. But you’ve had that block up for two solid weeks, except when you force yourself to keep it down. That means you’re ’way off the green.”

“I’ve been thinking, incredible as it may seem.”

“QX—you asked for it. Queer things have been going on; all over. Inexplicable things … no apparent reason.”

“Almost any kind of insidious deviltry you care to name. Disaffections, psychoses, mass hysterias, hallucinations; pointing toward a Civilization-wide epidemic of revolutions and uprisings for which there seems to be no basis or justification whatever.”

“Why, Kim! How could there be? I haven’t heard of anything like that!”

“It hasn’t got around. Each solar system thinks it’s a purely local condition, but it isn’t. As galactic coordinator, with a broad view of the entire picture, my office would of course see such a thing before anyone else could. We saw it, and set out to nip it in the bud … but …” He shrugged his shoulders and grinned wryly.

“But what?” Clarrissa persisted.

“It didn’t nip. We sent Lensmen to investigate, but none of them got to the first check-station. Then I asked our Second-Stage Lensmen—Worsel, Nadreck, and Tregonsee—to drop whatever they were doing and solve it for me. They hit it and bounced. They followed, and are still following, leads and clues galore, but they haven’t got a millo’s worth of results so far.”

“What? You mean it’s a problem they can’t solve?”

“That they haven’t, to date,” he corrected, absently. “And that ‘gives me furiously to think’.”

“It would,” she conceded, “and it also would make you itch to join them. Think at me, it’ll help you correlate. You should have gone over the data with me right at first.”

“I had reasons not to, as you’ll see. But I’m stumped now, so here goes. We’ll have to go away back, to before we were married. First; Mentor told me, quote, only your descendants will be ready for that for which you now so dimly grope, unquote. Second; you were the only being ever able to read my thoughts without a Lens. Third; Mentor told us, when we asked him if it was QX for us to go ahead, that our marriage was necessary, a choice of phraseology which bothered you somewhat at the time, but which I then explained as being in accord with his visualization of the Cosmic All. Fourth; the Patrol formula is to send the man best fitted for any job to do that job, and if he can’t swing it, to send the Number One graduate of the current class of Lensmen. Fifth; a Lensman has got to use everything and everybody available, no matter what or who it is. I used even you, you remember, in that Lyrane affair and others. Sixth; Sir Austin Cardynge believed to the day of his death that we were thrown out of that hyper-spatial tube, and out of space, deliberately.”

“You will, if you think of those six points in connection with our present predicament. Kit graduates next month, and he’ll rank number one of all Civilization, for all the tea in China.”

“Of course. But after all, he’s a Lensman. He’ll have to be assigned some problem; why not that one?”

“You don’t see yet what that problem is. I’ve been adding two and two together for weeks, and can’t get any other answer than four. And if two and two are four, Kit has got to tackle Boskone—the real Boskone; the one I never did and probably never can reach.”

She got up, crossed the room to him. He put his arm around her in the old but ever new gesture.

“Of course,” she replied then, as quietly. “It was a shock at first, coming after all these years, but … if it has to be, it must. But he—surely we can help him, Kim?”