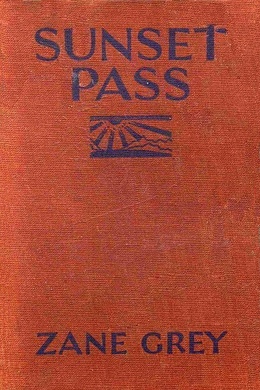 A brooding air of mystery hung over the locked-in valley. Only Rock’s blazing sixgun could free her from the unseen peril.

The dusty overland train pulled into Wagontongue about noon of a sultry June day. The dead station appeared slow in coming to life. Mexicans lounging in the shade of the platform did not move.

Trueman Rock slowly stepped down from the coach, grip in hand, with an eager and curious expression upon his lean dark face. He wore a plain check suit, rather wrinkled, and a big gray sombrero that had seen service. His step, his lithe shape, proclaimed him to be a rider. A sharp eye might have detected the bulge of a gun worn under his coat, high over his left hip and far back.

He had the look of a man who expected to see some one he knew. There was an easy, careless, yet guarded air about him. He walked down the platform, passing stationmen and others now moving about, without meeting anyone who took more than a casual glance at him. Then two young women came out of the waiting-room, and they shyly gazed after him. He returned the compliment.

At the end of the flagstone walk Rock hesitated and halted, as if surprised, even startled. Across the wide street stood a block of frame and brick buildings, with high weatherbeaten signs. It was a lazy scene. A group of cowboys occupied the corner; saddled horses were hitched to a rail; buckboards and wagons showed farther down the street; Mexicans in colorful garb sat in front of a saloon with painted windows.

“Reckon the old burg’s not changed any,” soliloquized Rock, with satisfaction. “Funny, I expected to find her all built up…. Let me see. It’s five—six years since I left. Well, I never ought to have come back, but I just couldn’t help it. Somethin’ roped me in, that’s sure.”

Memory stirred to the sight of the familiar corner. He had been in several bad gun fights in this town, and the scene of one of them lay before him. The warmth and intimacy of old pleasant associations suffered a chill. Rock wheeled away and hunted up the baggage-room to inquire about his saddle and bag, which he had checked at Deming. They had arrived with him. Reflecting that he did not know yet where to have them sent, Rock slipped the checks back into his pocket, and went out.

A subtle change had begun to affect his pleasure in returning to Wagontongue. He left the station, giving a wide berth to the street corner that had clouded his happy reflections. But he had not walked half a block before he came to another saloon, the familiar look of which and the barely decipherable name—Happy Days—acted like a blow in his face. He quickened his step, then reacting to his characteristic spirit, he deliberately turned back to enter the saloon. The same place, the same bar, stained mirror, and faded paintings, the same pool tables. Except for a barkeeper, the room was deserted. Rock asked for a drink.

“Stranger hereabouts, eh?” inquired the bartender, pleasantly, as he served him.

“Yes, but I used to know Wagontongue,” replied Rock. “You been here long?”

“Good, off an’ on. Of course it’s slack now, but there’s some trade in beef.”

“No. Butcherin’. Gage Preston’s outfit do a big business.”

“Are you a puncher or a cattleman, stranger?”

“Well, I was both,” replied Rock, with a laugh. “Reckon that means I always will be.”

Several booted men stamped in and lined up before the bar. Rock moved away and casually walked around, looking at the bold pictures on the wall. He remembered some of them. Also he found what he was unostentatiously seeking—some bullet holes in the wall. Then he went out.

“Reckon I oughtn’t have looked at that red liquor,” he decided.

There were times when it was bad for Trueman Rock to yield to the bottle. This was one of them. The sudden cold in his very marrow, the blank gray shade stealing over his mind, the presagement of a spell of morbid sinking of spirit—these usually preceded his rather rare drinking bouts. He had not succumbed in a long time now, and he hoped something would happen to prevent it in this instance. For if he fell here in Wagontongue, it would be very bad. It would be folly and the poorest kind of business. He had been industrious and fortunate for some years in a Texas cattle deal, and had sold out for ten thousand dollars, which amount of money he carried in cash upon his person.

Rock went to the Range House, a hotel on another corner. It had been redecorated, he noticed. He registered, gave the clerk his baggage checks, and went to the room assigned him, where he further resisted the mood encroaching upon him by shaving and making himself look presentable to his exacting eyes.

“Sure would like to run into Amy Wund,” he said, falling into another reminiscence. “Or Polly Ackers. Or Kit Rand…. All married long ago, I’ll bet.”