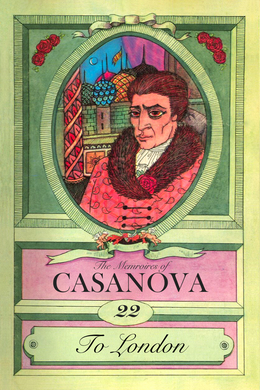 I meet the Venetian ambassadors at Lyons, and also Marcoline’s uncle. I then part from Marcoline and set out for Paris, where upon I drive my brother the Abbe from Paris. Madame du Rumain recovers her voice through my cabala. I then take d’Aranda to London. On arriving in London I meet madame Cornelis where I am presented at court. I rent a furnished house, making a large circle of acquaintance learning the manners of the English. An adventure at Ranelagh the English courtezans.

I Meet the Venetian Ambassadors at Lyons, and also Marcoline’s Uncle–I Part from Marcoline and Set Out for Paris–An Amorous Journey

Thus freed from the cares which the dreadful slanders of Possano had caused me, I gave myself up to the enjoyment of my fair Venetian, doing all in my power to increase her happiness, as if I had had a premonition that we should soon be separated from one another.

The day after the supper I gave to Madame Pernon and M. Bono, we went to the theatre together, and in the box opposite to us I saw M. Querini, the procurator, Morosini, M. Memmo, and Count Stratico, a Professor of the University of Padua. I knew all these gentlemen; they had been in London, and were passing through Lyons on their return to Venice.

“Farewell, fair Marcoline!” I said to myself, feeling quite broken- hearted, but I remained calm, and said nothing to her. She did not notice them as she was absorbed in her conversation with M. Bono, and besides, she did not know them by sight. I saw that M. Memmo had seen me and was telling the procurator of my presence, and as I knew the latter very well I felt bound to pay them my respects then and there.

Querini received me very politely for a devotee, as also did Morosini, while Memmo seemed moved; but no doubt he remembered that it was chiefly due to his mother that I had been imprisoned eight years ago. I congratulated the gentlemen on their embassy to England, on their return to their native land, and for form’s sake commended myself to their good offices to enable me to return also. M. Morosini, noticing the richness of my dress and my general appearance of prosperity, said that while I had to stay away he had to return, and that he considered me the luckier man.

“Your excellency is well aware,” said I, “that nothing is sweeter than forbidden fruit.”

He smiled, and asked me whither I went and whence I came.

“I come from Rome,” I answered, “where I had some converse with the Holy Father, whom I knew before, and I am going through Paris on my way to London.

“Call on me here, if you have time, I have a little commission to give you.”

“I shall always have time to serve your excellency in. Are you stopping here for long?”

When I ‘got back to my box Marcoline asked me who were the gentlemen to whom I had been speaking. I answered coolly and indifferently, but watching her as I spoke, that they were the Venetian ambassadors on their way from London. The flush of her cheek died away and was replaced by pallor; she raised her eyes to heaven, lowered them, and said not a word. My heart was broken. A few minutes afterwards she asked me which was M. Querini, and after I had pointed him out to her she watched him furtively for the rest of the evening.

The curtain fell, we left our box, and at the door of the theatre we found the ambassadors waiting for their carriage. Mine was in the same line as theirs. The ambassador Querini said,–

“You have a very pretty young lady with you.”

Marcoline stepped forward, seized his hand, and kissed it before I could answer.

Querini, who was greatly astonished, thanked her and said,–

“What have I done to deserve this honour?”

“Because,” said Marcoline, speaking in the Venetian dialect, “I have the honour of knowing his excellency M. Querini.”

“What are you doing with M. Casanova?”

My carriage came up. I made a profound bow to the ambassadors, and called out to the coachman, “To the ‘Hotel du Parc’.” It was the best hotel in Lyons, and I was not sorry for the Venetians to hear where I was staying.

Marcoline was in despair, for she saw that the time for parting was near at hand.

“We have three or four days before us,” said I, “in which we can contrive how to communicate with your uncle Mattio. I must commend you highly for kissing M. Querini’s hand. That was a masterstroke indeed. All will go off well; but I hope you will be merry, for sadness I abhor.”

We were still at table when I heard the voice of M. Memmo in the ante- chamber; he was a young man, intelligent and good-natured. I warned Marcoline not to say a word about our private affairs, but to display a moderate gaiety. The servant announced the young nobleman, and we rose to welcome him; but he made us sit down again, and sat beside us, and drank a glass of wine with the utmost cordiality. He told me how he had been supping with the old devotee Querini, who had had his hand kissed by a young and fair Venetian. The ambassadors were much amused at the circumstance, and Querini himself, in spite of his scrupulous conscience, was greatly flattered.

“May I ask you, mademoiselle,” he added, “how you came to know M. Querini?”

“A mystery, is it? What fun we shall have tomorrow! I have come,” he said, addressing himself to me, “to ask you to dine with us to-morrow, and you must bring your charming niece.”