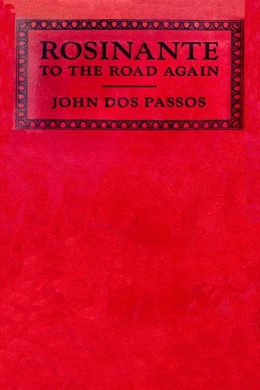 Rosinante to the Road Again

Drawing on his own adventures in the Spanish countryside, Dos Passos writes a story of two nomads walking from Madrid to Toledo in the years after World War I. Their travel interweaves Spanish customs, literature, and art. For the author, the country never ceases to tease the imagination.

Telemachus had wandered so far in search of his father he had quite forgotten what he was looking for. He sat on a yellow plush bench in the café El Oro del Rhin, Plaza Santa Ana, Madrid, swabbing up with a bit of bread the last smudges of brown sauce off a plate of which the edges were piled with the dismembered skeleton of a pigeon. Opposite his plate was a similar plate his companion had already polished. Telemachus put the last piece of bread into his mouth, drank down a glass of beer at one spasmodic gulp, sighed, leaned across the table and said:

“Why anywhere else than here?” said Lyaeus, a young man with hollow cheeks and slow-moving hands, about whose mouth a faint pained smile was continually hovering, and he too drank down his beer.

At the end of a perspective of white marble tables, faces thrust forward over yellow plush cushions under twining veils of tobacco smoke, four German women on a little dais were playing Tannhauser. Smells of beer, sawdust, shrimps, roast pigeon.

“Do you know Jorge Manrique? That’s one reason, Tel,” the other man continued slowly. With one hand he gestured to the waiter for more beer, the other he waved across his face as if to brush away the music; then he recited, pronouncing the words haltingly:

“It’s always death,” said Telemachus, “but we must go on.”

It had been raining. Lights rippled red and orange and yellow and green on the clean paving-stones. A cold wind off the Sierra shrilled through clattering streets. As they walked, the other man was telling how this Castilian nobleman, courtier, man-at-arms, had shut himself up when his father, the Master of Santiago, died and had written this poem, created this tremendous rhythm of death sweeping like a wind over the world. He had never written anything else. They thought of him in the court of his great dust-colored mansion at Ocaña, where the broad eaves were full of a cooing of pigeons and the wide halls had dark rafters painted with arabesques in vermilion, in a suit of black velvet, writing at a table under a lemon tree. Down the sun-scarred street, in the cathedral that was building in those days, full of a smell of scaffolding and stone dust, there must have stood a tremendous catafalque where lay with his arms around him the Master of Santiago; in the carved seats of the choirs the stout canons intoned an endless growling litany; at the sacristy door, the flare of the candles flashing occasionally on the jewels of his mitre, the bishop fingered his crosier restlessly, asking his favorite choir-boy from time to time why Don Jorge had not arrived. And messengers must have come running to Don Jorge, telling him the service was on the point of beginning, and he must have waved them away with a grave gesture of a long white hand, while in his mind the distant sound of chanting, the jingle of the silver bit of his roan horse stamping nervously where he was tied to a twined Moorish column, memories of cavalcades filing with braying of trumpets and flutter of crimson damask into conquered towns, of court ladies dancing, and the noise of pigeons in the eaves, drew together like strings plucked in succession on a guitar into a great wave of rhythm in which his life was sucked away into this one poem in praise of death.

Telemachus was saying the words over softly to himself as they went into the theatre. The orchestra was playing a Sevillana; as they found their seats they caught glimpses beyond people’s heads and shoulders of a huge woman with a comb that pushed the tip of her mantilla a foot and a half above her head, dancing with ponderous dignity. Her dress was pink flounced with lace; under it the bulge of breasts and belly and three chins quaked with every thump of her tiny heels on the stage. As they sat down she retreated bowing like a full-rigged ship in a squall. The curtain fell, the theatre became very still; next was Pastora.