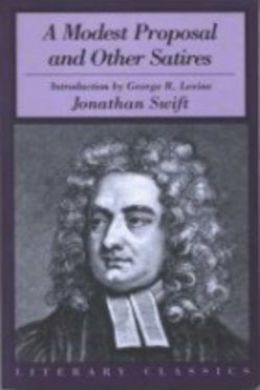 For preventing the children of poor people in Ireland, from being a burden on their parents or country, and for making them beneficial to the publick

From the master of satire, Jonathan Swift, comes a collection of his classic satirical works. “A Modest Proposal and Other Satires” includes the following works: A Tale of a Tub, The Battle of the Books, An Argument Against the Abolishment of Christianity, A Modest Proposal, A True and Faithful Narrative, A Meditation Upon a Broomstick, Predictions for the Year 1708, and The Accomplishment of the First Year of Mr. Bickerstaff’s Predictions.

It is a melancholy object to those, who walk through this great town, or travel in the country, when they see the streets, the roads and cabbin–doors crowded with beggars of the female sex, followed by three, four, or six children, all in rags, and importuning every passenger for an alms. These mothers instead of being able to work for their honest livelihood, are forced to employ all their time in stroling to beg sustenance for their helpless infants who, as they grow up, either turn thieves for want of work, or leave their dear native country, to fight for the Pretender in Spain, or sell themselves to the Barbadoes.

I think it is agreed by all parties, that this prodigious number of children in the arms, or on the backs, or at the heels of their mothers, and frequently of their fathers, is in the present deplorable state of the kingdom, a very great additional grievance; and therefore whoever could find out a fair, cheap and easy method of making these children sound and useful members of the common–wealth, would deserve so well of the publick, as to have his statue set up for a preserver of the nation.

But my intention is very far from being confined to provide only for the children of professed beggars: it is of a much greater extent, and shall take in the whole number of infants at a certain age, who are born of parents in effect as little able to support them, as those who demand our charity in the streets.