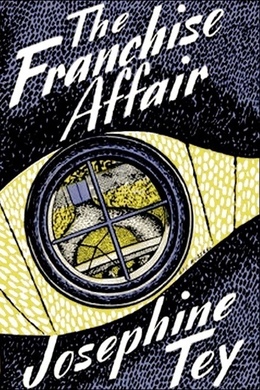 Robert Blair was about to knock off from a slow day at his law firm when the phone rang. It was Marion Sharpe on the line, a local woman of quiet disposition who lived with her mother at their decrepit country house, The Franchise. It appeared that she was in some serious trouble: Miss Sharpe and her mother were accused of brutally kidnapping a demure young woman named Betty Kane. Miss Kane’s claims seemed highly unlikely, even to Inspector Alan Grant of Scotland Yard, until she described her prison – the attic room with its cracked window, the kitchen, and the old trunks – which sounded remarkably like The Franchise. Yet Marion Sharpe claimed the Kane girl had never been there, let alone been held captive for an entire month! Not believing Betty Kane’s story, Solicitor Blair takes up the case and, in a dazzling feat of amateur detective work, solves the unbelievable mystery that stumped even Inspector Grant.

It was four o’clock of a spring evening; and Robert Blair was thinking of going home.

The office would not shut until five, of course. But when you are the only Blair, of Blair, Hayward, and Bennet, you go home when you think you will. And when your business is mostly wills, conveyancing, and investments your services are in small demand in the late afternoon. And when you live in Milford, where the last post goes out at 3.45, the day loses whatever momentum it ever had long before four o’clock.

It was not even likely that his telephone would ring. His golfing cronies would by now be somewhere between the fourteenth and the sixteenth hole. No one would ask him to dinner, because in Milford invitations to dinner are still written by hand and sent through the post. And Aunt Lin would not ring up and ask him to call for the fish on his way home, because this was her bi-weekly afternoon at the cinema, and she would at the moment be only twenty minutes gone with feature, so to speak.

So he sat there, in the lazy atmosphere of a spring evening in a little market town, staring at the last patch of sunlight on his desk (the mahogany desk with the brass inlay that his grandfather had scandalised the family by bringing home from Paris) and thought about going home. In the patch of sunlight was his tea-tray; and it was typical of Blair, Hayward, and Bennet that tea was no affair of a japanned tin tray and a kitchen cup. At 3.50 exactly on every working day Miss Tuff bore into his office a lacquer tray covered with a fair white cloth and bearing a cup of tea in blue-patterned china, and, on a plate to match, two biscuits; petit-beurre Mondays, Wednesdays and Fridays, digestive Tuesdays, Thursdays and Saturdays.

Looking at it now, idly, he thought how much it represented the continuity of Blair, Hayward, and Bennet. The china he could remember as long as he could remember anything. The tray had been used when he was very small by the cook at home to take the bread in from the baker, and had been rescued by his young mother and brought to the office to bear the blue-patterned cups. The cloth had come years later with the advent of Miss Tuff. Miss Tuff was a war-time product; the first woman who had ever sat at a desk in a respectable solicitor’s in Milford. A whole revolution Miss Tuff was in her single gawky thin earnest person. But the firm had survived the revolution with hardly a jolt, and now, nearly a quarter of a century later, it was inconceivable that thin grey dignified Miss Tuff had ever been a sensation. Indeed her only disturbance of the immemorial routine was the introduction of the tray-cloth. In Miss Tuff’s home no meal was ever put straight on to a tray; if it comes to that, no cakes were ever put straight on to a plate; a tray-cloth or a doyley must intervene. So Miss Tuff had looked askance at the bare tray. She had, moreover, considered the lacquered pattern distracting, unappetising, and “queer.” So one day she had brought a cloth from home; decent, plain, and white, as befitted something that was to be eaten off. And Robert’s father, who had liked the lacquer tray, looked at the clean white cloth and was touched by young Miss Tuff’s identification of herself with the firm’s interests, and the cloth had stayed, and was now as much a part of the firm’s life as the deed-boxes, and the brass plate, and Mr. Heseltine’s annual cold.

It was when his eyes rested on the blue plate where the biscuits had been that Robert experienced that odd sensation in his chest again. The sensation had nothing to do with the two digestive biscuits; at least, not physically. It had to do with the inevitability of the biscuit routine; the placid certainty that it would be digestive on a Thursday and petit-beurre on a Monday. Until the last year or so, he had found no fault with certainty or placidity. He had never wanted any other life but this: this quiet friendly life in the place where he had grown up. He still did not want any other. But once or twice lately an odd, alien thought had crossed his mind; irrelevant and unbidden. As nearly as it could be put into words it was: “This is all you are ever going to have.” And with the thought would come that moment’s constriction in his chest. Almost a panic reaction; like the heart-squeezing that remembering a dentist appointment would cause in his ten-year-old breast.

This annoyed and puzzled Robert; who considered himself a happy and fortunate person, and adult at that. Why should this foreign thought thrust itself on him and cause that dismayed tightening under his ribs? What had his life lacked that a man might be supposed to miss?

But he could have married if he had wanted to. At least he supposed he could; there were a great many unattached females in the district, and they showed no signs of disliking him.