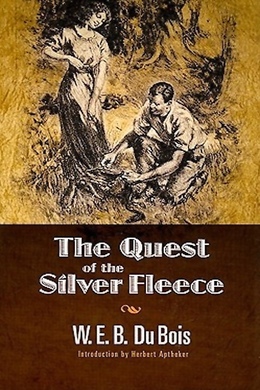 The Quest of the Silver Fleece

A controversial title of its time, the novel chronicles the complex interactions between Northern financing and Southern politics as it follows the story of free-spirited Zora, child of a Southern swamp, and her romance with Yankee-educated Bles, who will eventually face the opportunity to claim political power through corrupt means. In the middle of it all is the silver fleece, a crop of cotton rich with meaning and symbolism.

In the tradition of other incendiary novels that explore market forces at the turn of the century, such as Frank Norris’s The Pit and Upton Sinclair’s The Jungle, The Quest of the Silver Fleece was seen as an ‘economic study’ by Du Bois, yet it was also a romantic and otherwordly saga, loosely based on the Greek myth from which it takes its name. Using literary conventions to expose and oppose America’s views on race, Du Bois presents a sprawling and provocative work that continues to engage readers and inspire debate among literary scholars today.

Night fell. The red waters of the swamp grew sinister and sullen. The tall pines lost their slimness and stood in wide blurred blotches all across the way, and a great shadowy bird arose, wheeled and melted, murmuring, into the black-green sky.

The boy wearily dropped his heavy bundle and stood still, listening as the voice of crickets split the shadows and made the silence audible. A tear wandered down his brown cheek. They were at supper now, he whispered–the father and old mother, away back yonder beyond the night. They were far away; they would never be as near as once they had been, for he had stepped into the world. And the cat and Old Billy–ah, but the world was a lonely thing, so wide and tall and empty! And so bare, so bitter bare! Somehow he had never dreamed of the world as lonely before; he had fared forth to beckoning hands and luring, and to the eager hum of human voices, as of some great, swelling music.

Yet now he was alone; the empty night was closing all about him here in a strange land, and he was afraid. The bundle with his earthly treasure had hung heavy and heavier on his shoulder; his little horde of money was tightly wadded in his sock, and the school lay hidden somewhere far away in the shadows. He wondered how far it was; he looked and harkened, starting at his own heartbeats, and fearing more and more the long dark fingers of the night.

Then of a sudden up from the darkness came music. It was human music, but of a wildness and a weirdness that startled the boy as it fluttered and danced across the dull red waters of the swamp. He hesitated, then impelled by some strange power, left the highway and slipped into the forest of the swamp, shrinking, yet following the song hungrily and half forgetting his fear. A harsher, shriller note struck in as of many and ruder voices; but above it flew the first sweet music, birdlike, abandoned, and the boy crept closer.

The cabin crouched ragged and black at the edge of black waters. An old chimney leaned drunkenly against it, raging with fire and smoke, while through the chinks winked red gleams of warmth and wild cheer. With a revel of shouting and noise, the music suddenly ceased. Hoarse staccato cries and peals of laughter shook the old hut, and as the boy stood there peering through the black trees, abruptly the door flew open and a flood of light illumined the wood.

Amid this mighty halo, as on clouds of flame, a girl was dancing. She was black, and lithe, and tall, and willowy. Her garments twined and flew around the delicate moulding of her dark, young, half-naked limbs. A heavy mass of hair clung motionless to her wide forehead. Her arms twirled and flickered, and body and soul seemed quivering and whirring in the poetry of her motion.

As she danced she sang. He heard her voice as before, fluttering like a bird’s in the full sweetness of her utter music. It was no tune nor melody, it was just formless, boundless music. The boy forgot himself and all the world besides. All his darkness was sudden light; dazzled he crept forward, bewildered, fascinated, until with one last wild whirl the elf-girl paused. The crimson light fell full upon the warm and velvet bronze of her face–her midnight eyes were aglow, her full purple lips apart, her half hid bosom panting, and all the music dead. Involuntarily the boy gave a gasping cry and awoke to swamp and night and fire, while a white face, drawn, red-eyed, peered outward from some hidden throng within the cabin.

“Who’s that?” a harsh voice cried.

“Where?” “Who is it?” and pale crowding faces blurred the light.

The boy wheeled blindly and fled in terror stumbling through the swamp, hearing strange sounds and feeling stealthy creeping hands and arms and whispering voices. On he toiled in mad haste, struggling toward the road and losing it until finally beneath the shadows of a mighty oak he sank exhausted. There he lay a while trembling and at last drifted into dreamless sleep.

It was morning when he awoke and threw a startled glance upward to the twisted branches of the oak that bent above, sifting down sunshine on his brown face and close curled hair. Slowly he remembered the loneliness, the fear and wild running through the dark. He laughed in the bold courage of day and stretched himself.

Then suddenly he bethought him again of that vision of the night–the waving arms and flying limbs of the girl, and her great black eyes looking into the night and calling him. He could hear her now, and hear that wondrous savage music. Had it been real? Had he dreamed? Or had it been some witch-vision of the night, come to tempt and lure him to his undoing? Where was that black and flaming cabin? Where was the girl–the soul that had called him? She must have been real; she had to live and dance and sing; he must again look into the mystery of her great eyes. And he sat up in sudden determination, and, lo! gazed straight into the very eyes of his dreaming.