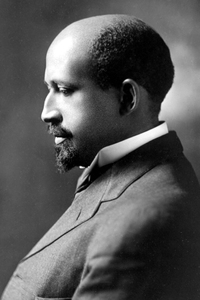 William Edward Burghardt Du Bois was an American sociologist, historian, civil rights activist, Pan-Africanist, author and editor. Born in Great Barrington, Massachusetts, Du Bois grew up in a relatively tolerant and integrated community. After graduating from Harvard, where he was the first African American to earn a doctorate, he became a professor of history, sociology and economics at Atlanta University.

A prolific author, Du Bois’ collection of essays, The Souls of Black Folk, was a seminal work in African-American literature; and his 1935 magnum opus Black Reconstruction in America challenged the prevailing orthodoxy that blacks were responsible for the failures of the Reconstruction Era. He wrote the first scientific treatise in the field of sociology; and he published three autobiographies, each of which contains insightful essays on sociology, politics and history. In his role as editor of the NAACP’s journal The Crisis, he published many influential pieces. Du Bois believed that capitalism was a primary cause of racism, and he was generally sympathetic to socialist causes throughout his life. He was an ardent peace activist and advocated nuclear disarmament. The United States’ Civil Rights Act, embodying many of the reforms for which Du Bois had campaigned his entire life, was enacted a year after his death. (source: Wikipedia)

A controversial title of its time, the novel chronicles the complex interactions between Northern financing and Southern politics as it follows the stor...read more »

This landmark book is a founding work in the literature of black protest. W. E. B. Du Bois played a key role in developing the strategy and program that...read more »