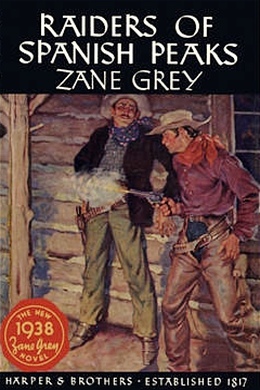 A classic tale of drama on the frontier, a thrilling tale of a how a man’s home is truly his castle. The Lindsay family has come west hoping to help the father, John, recover from an illness. When they arrive, they are induced to purchase Spanish Peaks Ranch, an abandoned United States military post surrounded by mountains. It seems like a perfect place to settle into their new life as ranchers. As they soon find out, though, this deserted fort is equally suited for both protection and imprisonment. In fact, they’ve been swindled into buying the longtime headquarters and hideout for a band of thieves and rustlers. Almost as soon as they get to work, the Lindsay family’s peace is disturbed, and their protected new homestead quickly becomes an isolated outpost as rustlers begin to harass their herds. John Lindsay discovers there are spies among his faithful cowboys. Things continue to get worse until finally their brewing hostilities climax in a nighttime attack, leading to all-out war and the abduction of one of the Lindsay girls and elopement of another. John must fight against treason on the inside and enemies on the outside to keep his family and new life safe.

Laramie’s horse went lame, and as Wingfoot was the only living creature he had to care for, he halted at midday, without thought of his own needs.

That long journey of yesterday, calculated to put a hundred miles between Laramie and a certain Kansas ranch where his old habit of gun-play on little provocation had rendered him unpopular, had aggravated a sprained tendon Wingfoot favored. Laramie slid out of the saddle.

“Heah, let me see, yu uncomplainin’ deceivin’ hawse,” said the rider. “How was I to know about it?”

Wingfoot might have traveled miles farther without serious result, but Laramie chose not to take the risk. He liked the pleasant prospect at hand—a widening valley bright with the spring green of cottonwoods and willows, and a gleam of water. He would camp there until the following day. It was nothing for Laramie to go hungry.

“Wal, Wingfoot, heah we stop,” he drawled as he removed the saddle. “Plenty grass an’ water for yu. If I see a cottontail I’ll shore make up for thet pore shootin’…. I’ve a pinch of salt left…. Now yu be around heah in the mawnin’.”

Wingfoot was not so lame that he could not roll. After thus indulging himself he made for the running stream and the patch of green on the bank. Laramie packed the burdened saddle beyond the edge of the grove to a willow thicket. Another of his range habits was that of caution. He needed sleep about as much as Wingfoot needed rest, but he decided to exhaust the meat possibilities of this valley before lying down. To that end he spread his saddle blankets to dry in the sun, and cut an armload of willows for a bed, after which he went hunting.

This particular section of southern central Kansas was unknown to him. It was a cattle country, a vast sweeping prairie-land, rolling and grassy, where a steer appeared to be as hard to find as a needle in a haystack. Few indeed had been the hoof tracks he had crossed that day. A long tramp down this winding lonesome swale earned Laramie no more than an appreciation of the ranch possibilities of the place. How many beautiful, fertile, lonely bits of rangeland had inspired the same desire for a farm, a few horses and cattle, a home! That hope never died, though Laramie was well on, as years counted at that time. Still, as many riders of twenty-five died with their boots on as lived to herd cattle.

Somewhere to the northwest lay the railroad and Dodge, for which Laramie was headed. Cattlemen and riders were as thick there as flies on a freshly skinned cowhide. He would get another job and try again, knowing that sooner or later he would straddle Wingfoot again for a grub-line ride. Thinking of meat made him more than usually keen-eyed, with the result that soon he espied a rabbit. It ran off a few rods, and then made the mistake to stop and squat down, after the manner of cottontails. Laramie shot the top of its head off.

“Wal, dog-gone!” he ejaculated, very pleased. “I reckoned I couldn’t hit nothin’ no more. Now if thet had happened to be Luke Arlidge … ”

Laramie did not end his speculation. He skinned and dressed the cottontail, and returning to camp built a little fire over which he broiled the rabbit to a nice brown. The addition of some salt made it so toothsome that Laramie wanted to devour it all. But he saved half for the morrow.

The heat of the day was passing. Wingfoot grazed contentedly down the valley. Laramie left his fire to look around. There was not even a bird to see. He had come from the north and had a curiosity to see what it looked like to the west, up over the low slope. But with the thought that there was no sense looking for trouble he went back to the willows and was soon asleep.

Upon being rudely awakened by some noise, Laramie thought he had scarcely closed his eyes. He heard a thud of hoofbeats on soft ground and then a harsh voice:

“We’re goin’ to string yu up to this heah cottonwood, thet’s what.”

“Fer no more’n yu’ve done yourself, Price,” came the reply in a young, bitter voice.

Laramie considered himself a judge of men through their voices. He sat up silently, a cold little thrill stiffening his spine, and peeped out between the willow leaves.