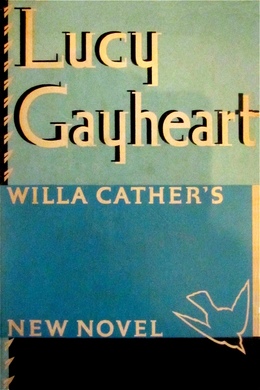 In this haunting novel, the Pulitzer Prize–winning author of My Ántonia and Death Comes for the Archbishop performs a series of crystalline variations on the themes that preoccupy her greatest fiction: the impermanence of innocence, the opposition between prairie and city, provincial American values and world culture, and the grandeur, elation, and heartache that await a gifted young woman who leaves her small Nebraska town to pursue a life in art. At the age of eighteen, Lucy Gayheart heads for Chicago to study music. She is beautiful and impressionable and ardent, and these qualities attract the attention of Clement Sebastian, an aging but charismatic singer who exercises all the tragic, sinister fascination of a man who has renounced life only to turn back to seize it one last time. Out of their doomed love affair—and Lucy’s fatal estrangement from her origins—Willa Cather creates a novel that is as achingly lovely as a Schubert sonata.

In Haverford on the Platte the townspeople still talk of Lucy Gayheart. They do not talk of her a great deal, to be sure; life goes on and we live in the present. But when they do mention her name it is with a gentle glow in the face or the voice, a confidential glance which says: “Yes, you, too, remember?” They still see her as a slight figure always in motion; dancing or skating, or walking swiftly with intense direction, like a bird flying home.

When there is a heavy snowfall, the older people look out of their windows and remember how Lucy used to come darting through just such storms, her muff against her cheek, not shrinking, but giving her body to the wind as if she were catching step with it. And in the heat of summer she came just as swiftly down the long shaded sidewalks and across the open squares blistering in the sun. In the breathless glare of August noons, when the horses hung their heads and the workmen “took it slow,” she never took it slow. Cold, she used to say, made her feel more alive; heat must have had the same effect.

The Gayhearts lived at the west edge of Haverford, half a mile from Main Street. People said “out to the Gayhearts’” and thought it rather a long walk in summer. But Lucy covered the distance a dozen times a day, covered it quickly with that walk so peculiarly her own, like an expression of irrepressible light-heartedness. When the old women at work in their gardens caught sight of her in the distance, a mere white figure under the flickering shade of the early summer trees, they always knew her by the way she moved. On she came, past hedges and lilac bushes and woolly-green grape arbours and rows of jonquils, and one knew she was delighted with everything; with her summer clothes and the air and the sun and the blossoming world. There was something in her nature that was like her movements, something direct and unhesitating and joyous, and in her golden-brown eyes. They were not gentle brown eyes, but flashed with gold sparks like that Colorado stone we call the tiger-eye. Her skin was rather dark, and the colour in her lips and cheeks was like the red of dark peonies–deep, velvety. Her mouth was so warm and impulsive that every shadow of feeling made a change in it.

Photographs of Lucy mean nothing to her old friends. It was her gaiety and grace they loved. Life seemed to lie very near the surface in her. She had that singular brightness of young beauty: flower gardens have it for the first few hours after sunrise.

We missed Lucy in Haverford when she went away to Chicago to study music. She was eighteen years old then; talented, but too careless and light-hearted to take herself very seriously. She never dreamed of a “career.” She thought of music as a natural form of pleasure, and as a means of earning money to help her father when she came home. Her father, Jacob Gayheart, led the town band and gave lessons on the clarinet, flute, and violin, at the back of his watch-repairing shop. Lucy had given piano lessons to beginners ever since she was in the tenth grade. Children liked her, because she never treated them like children; they tried to please her, especially the little boys.

Though Jacob Gayheart was a good watchmaker, he wasn’t a good manager. Born of Bavarian parents in the German colony at Belleville, Illinois, he had learned his trade under his father. He came to Haverford young and married an American wife, who brought him a half-section of good farm land. After her death he borrowed money on this farm to buy another, and now they were both mortgaged. That troubled his older daughter, Pauline, but it did not trouble Mr. Gayheart. He took more pains to make the band boys practise than he did to keep up his interest payments. He was a town character, of course, and people joked about him, though they were proud of their band. Mr. Gayheart looked like an old daguerreotype of a minor German poet; he wore a moustache and goatee and had a fine sweep of dark hair above his forehead, just a little grey at the sides. His intelligent, lazy hazel eyes seemed to say: “But it’s a very pleasant world, why bother?”

He managed to enjoy every day from start to finish. He got up early in the morning and worked for an hour in his flower garden. Then he took his bath and dressed for the day, selecting his shirt and necktie as carefully as if he were going to pay a visit. After breakfast he lit a good cigar and walked into town, never missing the flavour of his tobacco for a moment. Usually he put a flower in his coat before he left home. No one ever got more satisfaction out of good health and simple pleasures and a blue-and-gold band uniform than Jacob Gayheart. He was probably the happiest man in Haverford.