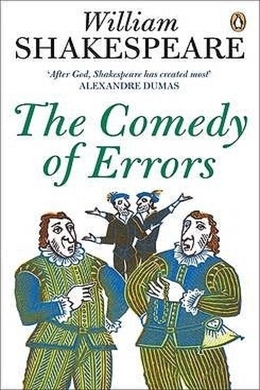 The Comedy of Errors

Hilarious fun, this early comedy is filled with the merry violence of slapstick and farce. When two sets of twins, separated and apparently lost to each other, all end up in the rowdy, rollicking city of Ephesus, the stage is set for mix-ups, mayhem, and mistaken identity–plus the timeless puns, jokes, gags, and suspense that makes this play a wonderful theatrical frolic and a brilliant tour de force of language and laughter.

A hall in DUKE SOLINUS’S palace.

Proceed, Solinus, to procure my fall And by the doom of death end woes and all.

Merchant of Syracuse, plead no more; I am not partial to infringe our laws: The enmity and discord which of late Sprung from the rancorous outrage of your duke To merchants, our well-dealing countrymen, Who wanting guilders to redeem their lives Have seal’d his rigorous statutes with their bloods, Excludes all pity from our threatening looks. For, since the mortal and intestine jars ‘Twixt thy seditious countrymen and us, It hath in solemn synods been decreed Both by the Syracusians and ourselves, To admit no traffic to our adverse towns Nay, more, If any born at Ephesus be seen At any Syracusian marts and fairs; Again: if any Syracusian born Come to the bay of Ephesus, he dies, His goods confiscate to the duke’s dispose, Unless a thousand marks be levied, To quit the penalty and to ransom him. Thy substance, valued at the highest rate, Cannot amount unto a hundred marks; Therefore by law thou art condemned to die.

Yet this my comfort: when your words are done, My woes end likewise with the evening sun.

Well, Syracusian, say in brief the cause Why thou departed’st from thy native home And for what cause thou camest to Ephesus.

A heavier task could not have been imposed Than I to speak my griefs unspeakable: Yet, that the world may witness that my end Was wrought by nature, not by vile offence, I’ll utter what my sorrows give me leave. In Syracusa was I born, and wed Unto a woman, happy but for me, And by me, had not our hap been bad. With her I lived in joy; our wealth increased By prosperous voyages I often made To Epidamnum; till my factor’s death And the great care of goods at random left Drew me from kind embracements of my spouse: From whom my absence was not six months old Before herself, almost at fainting under The pleasing punishment that women bear, Had made provision for her following me And soon and safe arrived where I was. There had she not been long, but she became A joyful mother of two goodly sons; And, which was strange, the one so like the other, As could not be distinguish’d but by names. That very hour, and in the self-same inn, A meaner woman was delivered Of such a burden, male twins, both alike: Those,–for their parents were exceeding poor,– I bought and brought up to attend my sons. My wife, not meanly proud of two such boys, Made daily motions for our home return: Unwilling I agreed. Alas! too soon, We came aboard. A league from Epidamnum had we sail’d, Before the always wind-obeying deep Gave any tragic instance of our harm: But longer did we not retain much hope; For what obscured light the heavens did grant Did but convey unto our fearful minds A doubtful warrant of immediate death; Which though myself would gladly have embraced, Yet the incessant weepings of my wife, Weeping before for what she saw must come, And piteous plainings of the pretty babes, That mourn’d for fashion, ignorant what to fear, Forced me to seek delays for them and me. And this it was, for other means was none: The sailors sought for safety by our boat, And left the ship, then sinking-ripe, to us: My wife, more careful for the latter-born, Had fasten’d him unto a small spare mast, Such as seafaring men provide for storms; To him one of the other twins was bound, Whilst I had been like heedful of the other: The children thus disposed, my wife and I, Fixing our eyes on whom our care was fix’d, Fasten’d ourselves at either end the mast; And floating straight, obedient to the stream, Was carried towards Corinth, as we thought. At length the sun, gazing upon the earth, Dispersed those vapours that offended us; And by the benefit of his wished light, The seas wax’d calm, and we discovered Two ships from far making amain to us, Of Corinth that, of Epidaurus this: But ere they came,–O, let me say no more! Gather the sequel by that went before.