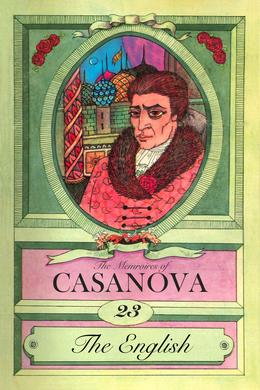 The reader who imagines that at these words rage gave place to love, and that I hastened to obtain the prize, does not know the nature of the passion so well as the vile woman whose plaything I was. From hot love to hot anger is a short journey, but the return is slow and difficult – 23rd volume of the classic Casanova!

I passed a night which seemed like a never-ending nightmare, and I got up sad and savage, feeling as if I could kill a man on the smallest provocation. It seemed as if the house, which I had hitherto thought so beautiful, was like a millstone about my neck. I went out in my travelling clothes, and walked into a coffee-house, where I saw a score of people reading the papers.

I sat down, and, not understanding English, passed my time in gazing at the goers and comers. I had been there some time when my attention was attracted by the voice of a man speaking as follows in French:

“Tommy has committed suicide, and he was wise, for he was in such a state that he could only expect unhappiness for the rest of his life.”

“You are quite mistaken,” said the other, with the greatest composure. “I was one of his creditors myself, and on making an inventory of his effects I feel satisfied that he has done a very foolish and a very childish thing; he might have lived on comfortably, and not killed himself for fully six months.”

At any other time this calculation would have made me laugh, and, as it was, I felt as if the incident had done me good.

I left the coffee-house without having said a word or spent a penny, and I went towards the Exchange to get some money. Bosanquet gave me what I wanted directly, and as I walked out with him I noticed a curious- looking individual, whose name I asked.

“He’s worth a hundred thousand,” said the banker.

“And who is that other man over there?”

“He’s not worth a ten-pound note.”

“But I don’t want to hear what they are worth; it’s their names I want.”

“How can you tell how much they are worth, not knowing their names?”

“Names don’t go for anything here. What we want to know about a man is how much he has got? Besides; what’s in a name? Ask me for a thousand pounds and give me a proper receipt, and you can do it under the name of Socrates or Attila, for all I care. You will pay me back my money as Socrates or Attila, and not as Seingalt; that is all.”

“But how about signing bills of exchange?”

“That’s another thing; I must use the name which the drawer gives me.”

“I don’t understand that.”

“Well, you see, you are not English, nor are you a business man.”

On leaving him I walked towards the park, but wishing to change a twenty-pound note before going in I went to a fat merchant, an epicure whose acquaintance I had made at the tavern, and put down the note on his counter, begging him to cash it for me.

“Very good; I will call again when I come from the park.”

“Take back your note; you shall give it to me when I hand you the money.”

“Never mind; keep it. I don’t doubt your honesty.”

“Don’t be so foolish. If you left me the note I should certainly decline to hand over the money, if only for the sake of giving you a lesson.”

“I don’t believe you are capable of such dishonesty.”

“Nor am I, but when it comes to such a simple thing as putting a bank note in your pocket, the most honest man in the world would never dream of having such a thing in his possession without having paid the money for it, and the least slip of memory might lead to a dispute in which you would infallibly come off second best.”

“I feel the force of your arguments, especially in a town where so much business is carried on.”

When I got into the park I met Martinelli and thanked him for sending me a copy of the Decameron, while he congratulated me on my re-appearance in society, and on the young lady of whom I had been the happy possessor and no doubt the slave.

“My Lord Pembroke has seen her,” said he, “and thought her charming.”

“What? Where could he have seen her?”

“In a carriage with you driving fast along the Rochester road. It is three or four days ago.”

“Then I may tell you that I was taking her to Calais; I shall never see her face again.”

“Will you let the room again in the same way?”

“No, never again, though the god of love has been propitious to me. I shall be glad to see you at my house whenever you like to come.”

“Shall I send you a note to warn you?”

We walked on talking about literature, manners, and so forth, in an aimless way. All at once, as we approached Buckingham House, I saw five or six persons, relieving nature amidst the bushes, with their hinder parts facing the passers-by. I thought this a disgusting piece of indecency, and said as much to Martinelli, adding that the impudent rascals might at least turn their faces towards the path.

“Not at all,” he exclaimed, “for then they might be recognized; whereas in exposing their posteriors they run no such risk; besides the sight makes squeamish persons turn away.”

“You are right, but you will confess that the whole thing strikes a stranger as very revolting.”