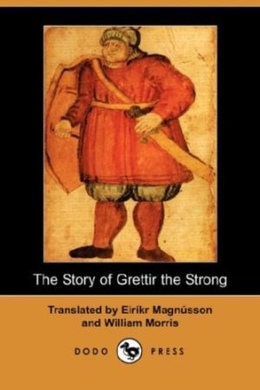 The Story of Grettir the Strong

A life scarce worth the living, a poor fame Scarce worth the winning, in a wretched land, Where fear and pain go upon either hand, As toward the end men fare without an aim Unto the dull grey dark from whence they came: Let them alone, the unshadowed sheer rocks stand Over the twilight graves of that poor band, Who count so little in the great world’s game!

Nay, with the dead I deal not; this man lives, And that which carried him through good and ill, Stern against fate while his voice echoed still From rock to rock, now he lies silent, strives With wasting time, and through its long lapse gives Another friend to me, life’s void to fill.

There was a man named Onund, who was the son of Ufeigh Clubfoot, the son of Ivar the Smiter; Onund was brother of Gudbiorg, the mother of Gudbrand Ball, the father of Asta, the mother of King Olaf the Saint. Onund was an Uplander by the kin of his mother; but the kin of his father dwelt chiefly about Rogaland and Hordaland. He was a great viking, and went harrying west over the Sea. Balk of Sotanes, the son of Blaeng, was with him herein, and Orm the Wealthy withal, and Hallvard was the name of the third of them. They had five ships, all well manned, and therewith they harried in the South-isles; and when they came to Barra, they found there a king, called Kiarval, and he, too, had five ships. They gave him battle, and a hard fray there was. The men of Onund were of the eagerest, and on either side many fell; but the end of it was that the king fled with only one ship. So there the men of Onund took both ships and much wealth, and abode there through the winter. For three summers they harried throughout Ireland and Scotland, and thereafter went to Norway.

In those days were there great troubles in Norway. Harald the Unshorn, son of Halfdan the Black, was pushing forth for the kingdom. Before that he was King of the Uplands; then he went north through the land, and had many battles there, and ever won the day. Thereafter he harried south in the land, and wheresoever he came, laid all under him; but when he came to Hordaland, swarms of folk came thronging against him; and their captains were Kiotvi the Wealthy, and Thorir Longchin, and those of South Rogaland, and King Sulki. Geirmund Helskin was then in the west over the Sea; nor was he in that battle, though he had a kingdom in Hordaland.

Now that autumn Onund and his fellows came from the west over the Sea; and when Thorir Longchin and King Kiotvi heard thereof, they sent men to meet them, and prayed them for help, and promised them honours. Then they entered into fellowship with Thorir and his men; for they were exceeding fain to try their strength, and said that there would they be whereas the fight was hottest.

Now was the meeting with Harald the King in Rogaland, in that firth which is called Hafrsfirth; and both sides had many men. This was the greatest battle that has ever been fought in Norway, and hereof most Sagas tell; for of those is ever most told, of whom the Sagas are made; and thereto came folk from all the land, and many from other lands and swarms of vikings.

Now Onund laid his ship alongside one board of the ship of Thorir Longchin, about the midst of the fleet, but King Harald laid his on the other board, because Thorir was the greatest bearserk, and the stoutest of men; so the fight was of the fiercest on either side. Then the king cried on his bearserks for an onslaught, and they were called the Wolf-coats, for on them would no steel bite, and when they set on nought might withstand them. Thorir defended him very stoutly, and fell in all hardihood on board his ship; then was it cleared from stem to stern, and cut from the grapplings, and let drift astern betwixt the other ships. Thereafter the king’s men laid their ship alongside Onund’s, and he was in the forepart thereof and fought manly; then the king’s folk said, “Lo, a forward man in the forecastle there, let him have somewhat to mind him how that he was in this battle.” Now Onund put one foot out over the bulwark and dealt a blow at a man, and even therewith a spear was aimed at him, and as he put the blow from him he bent backward withal, and one of the king’s forecastle men smote at him, and the stroke took his leg below the knee and sheared it off, and forthwith made him unmeet for fight. Then fell the more part of the folk on board his ship; but Onund was brought to the ship of him who is called Thrand; he was the son of Biorn, and brother of Eyvind the Eastman; he was in the fight against King Harald and lay on the other board of Onund’s ship.

But now, after these things, the more part of the fleet scattered in flight; Thrand and his men, with the other vikings, got them away each as he might, and sailed west over the Sea; Onund went with him, and Balk and Hallvard Sweeping; Onund was healed, but went with a wooden leg all his life after; therefore as long as he lived was he called Onund Treefoot.