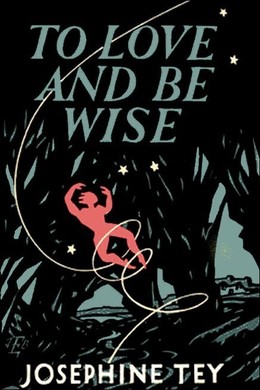 To Love and Be Wise

When a young strikingly handsome photographer mysteriously disappears, it’s up to Inspector Alan Grant to discover whether he accidentally drowned, committed suicide, or met his death at the hands of one of his many female admirers.

Grant paused with his foot on the lowest step, and listened to the shrieking from the floor above. As well as the shrieks there was a dull continuous roar; an elemental sound, like a forest fire or a river in spate. As his reluctant legs bore him upwards he arrived at the inevitable deduction: the party was being a success.

He was not going to the party. Literary sherry parties, even distinguished ones, were not Grant’s cup of tea. He was going to collect Marta Hallard and take her out to dinner. Policemen, it is true, do not normally take out to dinner leading actresses who gravitate between the Haymarket and the Old Vic; not even when the policemen are Detective-Inspectors at Scotland Yard. There were three reasons for his privileged position, and Grant was aware of all three. In the first place he was a presentable escort, in the second place he could afford to dine at Laurent’s, and in the third place Marta Hallard did not find it easy to obtain escort. For all her standing, and her chic, men were a little afraid of Marta. So when Grant, a mere Detective-Sergeant then, appeared in her life over a matter of stolen jewellery, she had seen to it that he did not entirely fade out of it again. And Grant had been glad to stay. If he was useful to Marta as a cavalier when she needed one, she was even more useful to him as a window on the world. The more windows on the world a policeman has the better he is likely to be at his job, and Marta was Grant’s ‘leper’s squint’ on the theatre.

The roar of the party’s success came flooding out through the open doors on to the landing, and Grant paused to look at the yelling crowd asparagus-packed into the long Georgian room and to wonder how he was going to pry Marta out of it.

Just inside the door, baffled apparently by the solid wall of talking and drinking humanity, was a young man, looking lost. He still had his hat in his hand, and had therefore just arrived.

He said it in a gentle drawl, not bothering to compete with the crowd. The mere difference in pitch made the words more audible than if he had shouted. Grant glanced at him again, approvingly. He was a very good-looking young man indeed, now that he took notice. Too blond to be entirely English. Norwegian, perhaps?

Or American. There was something in the way he said ‘forgotten’ that was transatlantic.

The early spring afternoon was already blue against the windows and the lamps were lit. Across the haze of cigarette smoke Grant could see Marta at the far end of the room listening to Tullis the play-wright telling her about his royalties. He did not have to hear what Tullis was talking about to know that he was talking about his royalties; that is all Tullis ever talked about. Tullis could tell you, off-hand, what the Number Two company of his Supper for Three took on Easter Monday in Blackpool in 1938. Marta had given up even a pretence of listening, and her mouth drooped at the corners. Grant thought that if that D.B.E. did not come along soon Marta would be disappointed into the need for a face-lifting. He decided to stay where he was until he could catch her eye. They were both tall enough to see over the heads of a normal crowd.

With a policeman’s ingrained habit of inspection he let his eye run over the crowd between them, but found nothing of interest. It was the usual collection. The very prosperous firm of Ross and Cromarty were celebrating the publication of Lavinia Fitch’s twenty-first book, and since it was largely due to Lavinia that the firm was prosperous the drinks were plentiful and the guests were distinguished. Distinguished in the sense of being well-dressed and well-known, that is to say. The distinguished in achievement did not celebrate the birth of Maureen’s Lover, nor drink the sherry of Messrs Ross and Cromarty. Even Marta, that inevitable Dame, was here because she was a neighbour of Lavinia’s in the country. And Marta, bless her black-and-white chic and her disgruntled look, was the nearest thing to real distinction in the room.

Unless, of course, this young man whom he did not know brought more than good looks to the party. He wondered what the stranger did for a living. An actor? But an actor would not stand baffled at the edge of a crowd. And there was something in the implied comment of his remark about the megaphone, in the detachment with which he was watching the scene, that divorced him from his surroundings. Was it possible, Grant wondered, that those cheekbones were being wasted in a stockbroker’s office? Or was it perhaps that the soft light of Messrs Ross and Cromarty’s expensive lamps flattered that nice straight nose and the straight blond hair and that the young man was less beautiful in the daylight?

‘Perhaps you can tell me,’ said the young man, still not raising his voice in emulation, ‘which is Miss Lavinia Fitch?’