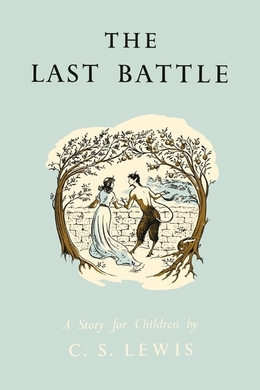 The last battle is the greatest battle of all. Narnia… where lies breed fear… where loyalty is tested… where all hope seems lost. During the last days of Narnia, the land faces its fiercest challenge - not an invader from without but an enemy from within. Lies and treachery have taken root, and only the king and a small band of loyal followers can prevent the destruction of all they hold dear in this, the magnificent ending to the Chronicles of Narnia.

In the last days of Narnia, far up to the west beyond Lantern Waste and close beside the great waterfall, there lived an Ape. He was so old that no one could remember when he had first come to live in those parts, and he was the cleverest, ugliest, most wrinkled Ape you can imagine. He had a little house, built of wood and thatched with leaves, up in the fork of a great tree, and his name was Shift. There were very few Talking Beasts or Men or Dwarfs, or people of any sort, in that part of the wood, but Shift had one friend and neighbour who was a donkey called Puzzle. At least they both said they were friends, but from the way things went on you might have thought Puzzle was more like Shift’s servant than his friend. He did all the work. When they went together to the river, Shift filled the big skin bottles with water but it was Puzzle who carried them back. When they wanted anything from the towns further down the river, it was Puzzle who went down with empty panniers on his back and came back with the panniers full and heavy. And all the nicest things that Puzzle brought back were eaten by Shift; for as Shift said, “You see Puzzle, I can’t eat grass and thistles like you, so it’s only fair I should make it up in other ways.” And Puzzle always said, “Of course, Shift, of course. I see that.” Puzzle never complained, because he knew that Shift was far cleverer than himself and he thought it was very kind of Shift to be friends with him at all. And if ever Puzzle did try to argue about anything, Shift would always say, “Now, Puzzle, I understand what needs to be done better than you. You know you’re not clever, Puzzle.” And Puzzle always said, “No, Shift. It’s quite true. I’m not clever.” Then he would sigh and do whatever Shift had said.

One morning early in the year the pair of them were out walking along the shore of Caldron Pool. Caldron Pool is the big pool right under the cliffs at the western end of Narnia. The great waterfall pours down into it with a noise like everlasting thunder, and the River of Narnia flows out on the other side. The waterfall keeps the pool always dancing and bubbling and churning round and round as if it were on the boil, and that of course is how it got its name of Caldron Pool. It is liveliest in the early spring when the waterfall is swollen with all the snow that has melted off the mountains from up beyond Narnia in the Western Wild from which the river comes. And as they looked at Caldron Pool, Shift suddenly pointed with his dark, shiny finger and said,

“That yellow thing that’s just come down the waterfall. Look! There it is again, it’s floating. We must find out what it is.”

“Of course we must,” said Shift. “It may be something useful. Just hop into the Pool like a good fellow and fish it out. Then we can have a proper look at it.”

“Hop into the Pool?” said Puzzle, twitching his long ears.

“But–but,” said Puzzle, “wouldn’t it be better if you went in? Because, you see it’s you who want to know what it is, and I don’t much. And you’ve got hands, you see. You’re as good as a Man or a Dwarf when it comes to catching hold of things. I’ve only got hoofs.”

“Why, what have I said wrong?” said the Ass, speaking in rather a humble voice, for he saw that Shift was very deeply offended. “All I meant was–”

“Wanting me to go into the water,” said the Ape. “As if you didn’t know perfectly well what weak chests Apes always have and how easily they catch cold! Very well. I will go in. I’m feeling cold enough already in this cruel wind. But I’ll go in. I shall probably die. Then you’ll be sorry.” And Shift’s voice sounded as if he was just going to burst into tears.

So Shift promised, and Puzzle went cloppety-clop on his four hoofs round the rocky edge of the Pool to find a place where he could get in. Quite apart from the cold it was no joke getting into that quivering and foaming water, and Puzzle had to stand and shiver for a whole minute before he made up his mind to do it. But then Shift called out from behind him and said: “Perhaps I’d better do it after all, Puzzle.” And when Puzzle heard that he said, “No, no. You promised. I’m in now,” and in he went.