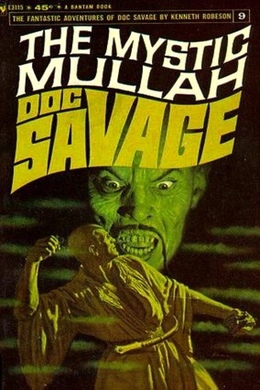 It was an ageless thing that had existed since the beginning of time – a monstrous green face that spoke sudden death. With its legions of ghostly, nebulous soul slaves, it had begun to terrorize the world. Even Doc Savage and his fantastic five were helpless against its awesome power, until…

It was a drizzling gray evening full of moaning ghosts. The rain came down in occasional flurries, but most of the time it remained suspended in the air as mist that the newspapers next day were to call “the thickest fog within memory.” Harbor traffic was almost at a standstill, and only those boat captains who were foolhardy, or those pressed by absolute necessity, were abroad. The foghorns of the boats were the moaning ghosts.

One ghost was especially persistent. It had the particular strident voice peculiar to tugboat whistles, and it came up through the Narrows from the open sea at a clip that put cold chills on the spines of boatmen who knew how thick that fog was.

There was something scared, something imperative, and maybe something a bit mad about the tooting of that tugboat. A coast guard cutter became interested and nosed over to investigate. Coast guardsmen will go out in anything.

The cutter skipper nosed in close, saw that the tug was the Whale of Gotham, and that there was a picture of a spouting whale painted on the bows. Then, after the manner of coast guard skippers with tugboat captains, the cutter commandant swore a blue streak.

“What’s the idea of tearing in here like an express train?” he finished.

The tugboat master swore back. He would have been very polite to another tugboat captain, but a coast guard skipper was fair game.

“Sheer off!” he yelled. “I’ve got a man aboard, who’s been hurt! We’re rushing him to a hospital. He’s dying!”

It was a story that satisfied even the coast guardsman, so he sheered off and betook himself away in the fog. And that set the tugboat captain to chuckling.

A voice at the tugboat captain’s elbow spoke an English that was entirely too perfect.

“Why did you tell him that?” it asked. “We have no dying man aboard.”

The tug master jumped as if a transatlantic liner had shoved out of the fog at full speed. He turned, an angry exclamation on his tongue, for he did not like to be startled, especially in this fog, with his nerves already on edge. But he held his counsel, for the man at his elbow did not look like one who would take a tongue-lashing; and furthermore, it would be bad policy to insult a man who is paying a tremendous sum for the services of your tugboat.

The man had a big hooked nose and a beard that was small and pointed. His skin was a yellow-brown, dry and wrinkled, and did not appeal to the eye. He wore strange garments.

The tugboat skipper had done his life’s traveling in New York harbor, so he did not know that the long, flowing white mantle which reached down from the hook-nosed man’s head was an abah, or that his embroidered cloak was a jubbah, or that the queer-looking trousers were shirwals. Only one who had traveled in Central Asia would know what the garments were called.

On the hook-nosed man’s forehead was a strange design, an affair of lines which might have been construed as a likeness of a serpent coiled around a jewel, as if protecting it. The lines looked as if they were put on with ink, but actually they were tattooed into the skin with a fluid that one of the master sorcerers of Asia had insisted was composed partially of the dried blood of Genghis Khan, the original.

To the tugboat captain, the mark looked like a dirty smear; and had he known its true significance, he might have fallen off the bridge of his grimy craft. For it was the Sacred Seal of the Khan Nadir Shar, Son of Divinity, Destined Master of Ten Thousand Lances, Khan of Tanan, Ruler of Outer Mongolia. Maybe the tug skipper would not have known what all of that meant. Probably not.

It meant that the hook-nosed man, Khan Shar, was a king, absolute ruler of the city of Tanan, beyond Outer Mongolia, and monarch over the surrounding provinces.

“Advise me when we tie up at the dock,” requested Khan Shar in his too-perfect English.

“Sure,” said the skipper.

“This dock you have selected—it is secluded?” asked the Khan.

The skipper rolled his tobacco quid in his jaws. The man made him nervous.

“Excellent!” said the Khan, and left the tugboat bridge, or more properly, the pilot house.

The tugboat captain rolled his eyes and directed tobacco juice at the feet of one of his two deckhands, who had come in out of the foggy night.

“Damned if I like this,” he said in a tone which showed he wanted to talk to relieve his mind.

The deckhand, who knew that tone, let his boss talk without interruption.

“Damned if I like it,” repeated the skipper. “I get a radio to go out to the Atlantic Queen, that new liner that’s fog bound, and take off a passenger. I get out there, and, by golly, if it ain’t three passengers, and two of ’em the queerest-lookin’ ducks you ever saw! Take that one who was just in here.”

“I’d rather take him than the other man,” said the deckhand in a queer tone.