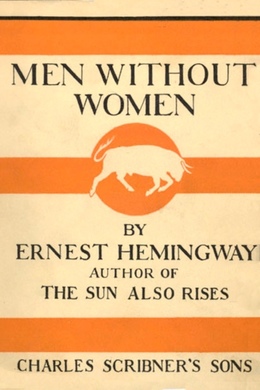 Representing some of Hemingway’s most important and compelling early writing. In these 14 stories, Hemingway begins to examine the themes that would occupy his later works: the casualties of war, the often uneasy relationship between men and women, sport and sportsmanship. In Banal Story, Hemingway offers a lasting tribute to the famed matador Maera. In Another Country tells of an Italian major recovering from war wounds as he mourns the untimely death of his wife. The Killers is the hard-edged story about two Chicago gunmen and their potential victim. Nick Adams makes an appearance in Ten Indians, in which he is presumably betrayed by his Indian girlfriend, Prudence. And Hills Like White Elephants is a young couple’s subtle, heartwrenching discussion of abortion. Pared down, gritty, and subtly expressive, these stories show the young Hemingway emerging as America’s finest short story writer.

Manuel Garcia climbed the stairs to Don Miguel Retana’s office. He set down his suitcase and knocked on the door. There was no answer. Manuel, standing in the hallway, felt there was some one in the room. He felt it through the door.

There was no answer.

He’s there, all right, Manuel thought.

“Retana,” he said and banged the door.

“Who’s there?” said some one in the office.

“What do you want?” asked the voice.

“I want to work,” Manuel said.

Something in the door clicked several times and it swung open. Manuel went in, carrying his suitcase.

A little man sat behind a desk at the far side of the room. Over his head was a bull’s head, stuffed by a Madrid taxidermist; on the walls were framed photographs and bull-fight posters.

“I thought they’d killed you,” he said.

Manuel knocked with his knuckles on the desk. The little man sat looking at him across the desk.

“How many corridas you had this year?” Retana asked.

“Just that one?” the little man asked.

“I read about it in the papers,” Retana said. He leaned back in the chair and looked at Manuel.

Manuel looked up at the stuffed bull. He had seen it often before. He felt a certain family interest in it. It had killed his brother, the promising one, about nine years ago. Manuel remembered the day. There was a brass plate on the oak shield the bull’s head was mounted on. Manuel could not read it, but he imagined it was in memory of his brother. Well, he had been a good kid.

The plate said: “The Bull ‘Mariposa’ of the Duke of Veragua, which accepted 9 varas for 7 caballos, and caused the death of Antonio Garcia, Novillero, April 27, 1909.”

Retana saw him looking at the stuffed bull’s head.

“The lot the Duke sent me for Sunday will make a scandal,” he said. “They’re all bad in the legs. What do they say about them at the Café?”

He looked at Manuel, leaning back behind the big desk.

Manuel sat down; his cap off, his face was changed. He looked pale, and his coleta pinned forward on his head, so that it would not show under the cap, gave him a strange look.

“I just got out of the hospital,” Manuel said.

“I heard they’d cut your leg off,” Retana said.

Retana leaned forward across the desk and pushed a wooden box of cigarettes toward Manuel.

“Have a cigarette,” he said.

“Smoke?” he said, offering the match to Retana.

“There aren’t any bull-fighters any more,” Retana said.

“Yes, while you’re in there,” Retana said.

Retana sat, saying nothing and looking at Manuel.

“I’ll put you in a nocturnal if you want,” Retana offered.

“Why don’t you put me on next week?” Manuel suggested.

“You wouldn’t draw,” Retana said. “All they want is Litri and Rubito and La Torre. Those kids are good.”

“They’d come to see me get it,” Manuel said, hopefully.

“No, they wouldn’t. They don’t know who you are any more.”

“I’m offering to put you on to-morrow night,” Retana said. “You can work with young Hernandez and kill two novillos after the Chariots.”

“I don’t know. Whatever stuff they’ve got in the corrals. What the veterinaries won’t pass in the daytime.”

“You can take it or leave it,” Retana said. He leaned forward over the papers. He was no longer interested. The appeal that Manuel had made to him for a moment when he thought of the old days was gone. He would like to get him to substitute for Larita because he could get him cheaply. He could get others cheaply too. He would like to help him though. Still he had given him the chance. It was up to him.

“How much do I get?” Manuel asked. He was still playing with the idea of refusing. But he knew he could not refuse.