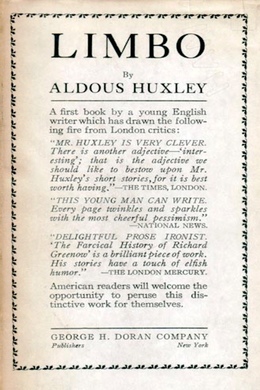 Huxley’s first collection of short stories contains seven visionary and satirical tales, which introduces themes that will go on to form the basis of his entire works. The events and the protagonists of these stories, with their personalities falling between the explicit and the elusive, are also rich in parallels and points in common with the life of their author. In The Death of Lully a woman is struck by breast cancer, the disease that killed the young author’s mother to whom he was very close; and suicide as that of his brother, recurs in Eupompus Gave Splendour To Art By Numbers. Among all, however, Farcical History Of Richard Greenow takes the form of an autobiography, from the setting to the events described, there are many points of contact between the protagonist and that of the author: like a new Dr Jekyll’s alter ego protagonist (and the same Huxley) will face his personal Mr. Hyde, in the staging of the struggle between two different and irreconcilable ways of thinking about literature and civic engagement.

The most sumptuous present that Millicent received on her seventh birthday was a doll’s house. “With love to darling little Mill from Aunty Loo.” Aunt Loo was immensely rich, and the doll’s house was almost as grandiose and massive as herself.

It was divided into four rooms, each papered in a different colour and each furnished as was fitting: beds and washstands and wardrobes in the upstair rooms, arm-chairs and artificial plants below. “Replete with every modern convenience; sumptuous appointments.” There was even a cold collation ready spread on the dining-room table—two scarlet lobsters on a dish, and a ham that had been sliced into just enough to reveal an internal complexion of the loveliest pink and white. One might go on talking about the doll’s house for ever, it was so beautiful. Such, at any rate, was the opinion of Millicent’s brother Dick. He would spend hours opening and shutting the front door, peeping through the windows, arranging and rearranging the furniture. As for Millicent, the gorgeous present left her cold. She had been hoping—and, what is more, praying, fervently, every night for a month—that Aunty Loo would give her a toy sewing-machine (one of the kind that works, though) for her birthday.

She was bitterly disappointed when the doll’s house came instead. But she bore it all stoically and managed to be wonderfully polite to Aunty Loo about the whole affair. She never looked at the doll’s house: it simply didn’t interest her.

Dick had already been at a preparatory school for a couple of terms. Mr. Killigrew, the headmaster, thought him a promising boy. “Has quite a remarkable aptitude for mathematics,” he wrote in his report. “He has started Algebra this term and shows a”—“quite remarkable” scratched out (the language of reports is apt to be somewhat limited)—“a very unusual grasp of the subject.” Mr. Killigrew didn’t know that his pupil also took an interest in dolls: if he had, he would have gibed at Dick as unmercifully and in nearly the same terms as Dick’s fellow-schoolboys—for shepherds grow to resemble their sheep and pedagogues their childish charges. But of course Dick would never have dreamt of telling anyone at school about it. He was chary of letting even the people at home divine his weakness, and when anyone came into the room where the doll’s house was, he would put his hands in his pockets and stroll out, whistling the tune of, “There is a Happy Land far, far away, where they have Ham and Eggs seven times a day,” as though he had merely stepped in to have a look at the beastly thing—just to give it a kick.

When he wasn’t playing with the doll’s house, Dick spent his holiday time in reading, largely, devouringly. No length or incomprehensibility could put him off; he had swallowed down Robert Elsmere in the three-volume edition at the age of eight. When he wasn’t reading he used to sit and think about Things in General and Nothing in Particular; in fact, as Millicent reproachfully put it, he just mooned about. Millicent, on the other hand, was always busily doing something: weeding in the garden, or hoeing, or fruit-picking (she could be trusted not to eat more than the recognized tariff—one in twenty raspberries or one in forty plums); helping Kate in the kitchen; knitting mufflers for those beings known vaguely as The Cripples, while her mother read aloud in the evenings before bedtime. She disapproved of Dick’s mooning, but Dick mooned all the same.

When Dick was twelve and a half he knew enough about mathematics and history and the dead languages to realize that his dear parents were profoundly ignorant and uncultured. But, what was more pleasing to the dear parents, he knew enough to win a scholarship at Æsop College, which is one of our Greatest Public Schools.

If this were a Public School story, I should record the fact that, while at Æsop, Dick swore, lied, blasphemed, repeated dirty stories, read the articles in John Bull about brothels disguised as nursing-homes and satyrs disguised as curates; that he regarded his masters, with very few exceptions, as fools, not even always well-meaning. And so on. All which would be quite true, but beside the point. For this is not one of the conventional studies of those clever young men who discover Atheism and Art at School, Socialism at the University, and, passing through the inevitable stage of Sex and Syphilis after taking their B.A., turn into maturely brilliant novelists at the age of twenty-five. I prefer, therefore, to pass over the minor incidents of a difficult pubescence, touching only on those points which seem to throw a light on the future career of our hero.