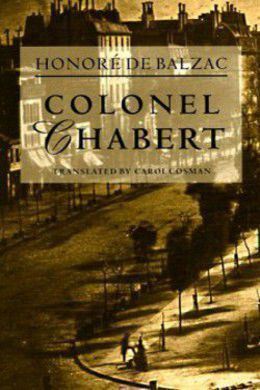 The story of a French military hero of the Napoleonic Wars, long assumed to be dead, tries to recover his fortune and former wife through the help of a famous Parisian lawyer. Colonel Chabert, a Napoleonic War hero supposedly killed in the Battle of Eylau, returns to Paris after a long convalescence to find his wife remarried, and his pension gone. He employs a young, well-known lawyer to at least reclaim his pension. It is a game of wits: first to convince the lawyer that he is who he says he is; secondly to get his wife to admit to his identity and thereby give up some of her wealth. Once the lawyer believes Chabert’s story, the wife must be made to part with his pension…

“Hullo! There is that old Box-coat again!”

This exclamation was made by a lawyer’s clerk of the class called in French offices a gutter-jumper–a messenger in fact–who at this moment was eating a piece of dry bread with a hearty appetite. He pulled off a morsel of crumb to make into a bullet, and fired it gleefully through the open pane of the window against which he was leaning. The pellet, well aimed, rebounded almost as high as the window, after hitting the hat of a stranger who was crossing the courtyard of a house in the Rue Vivienne, where dwelt Maitre Derville, attorney-at-law.

“Come, Simonnin, don’t play tricks on people, or I will turn you out of doors. However poor a client may be, he is still a man, hang it all!” said the head clerk, pausing in the addition of a bill of costs.

The lawyer’s messenger is commonly, as was Simonnin, a lad of thirteen or fourteen, who, in every office, is under the special jurisdiction of the managing clerk, whose errands and billets-doux keep him employed on his way to carry writs to the bailiffs and petitions to the Courts. He is akin to the street boy in his habits, and to the pettifogger by fate. The boy is almost always ruthless, unbroken, unmanageable, a ribald rhymester, impudent, greedy, and idle. And yet, almost all these clerklings have an old mother lodging on some fifth floor with whom they share their pittance of thirty or forty francs a month.

“If he is a man, why do you call him old Box-coat?” asked Simonnin, with the air of a schoolboy who has caught out his master.

And he went on eating his bread and cheese, leaning his shoulder against the window jamb; for he rested standing like a cab-horse, one of his legs raised and propped against the other, on the toe of his shoe.

“What trick can we play that cove?” said the third clerk, whose name was Godeschal, in a low voice, pausing in the middle of a discourse he was extemporizing in an appeal engrossed by the fourth clerk, of which copies were being made by two neophytes from the provinces.

Then he went on improvising:

“But, in his noble and beneficent wisdom, his Majesty, Louis the Eighteenth–(write it at full length, heh! Desroches the learned–you, as you engross it!)–when he resumed the reins of Government, understood–(what did that old nincompoop ever understand?)–the high mission to which he had been called by Divine Providence!–(a note of admiration and six stops. They are pious enough at the Courts to let us put six)–and his first thought, as is proved by the date of the order hereinafter designated, was to repair the misfortunes caused by the terrible and sad disasters of the revolutionary times, by restoring to his numerous and faithful adherents–(‘numerous’ is flattering, and ought to please the Bench)–all their unsold estates, whether within our realm, or in conquered or acquired territory, or in the endowments of public institutions, for we are, and proclaim ourselves competent to declare, that this is the spirit and meaning of the famous, truly loyal order given in–Stop,” said Godeschal to the three copying clerks, “that rascally sentence brings me to the end of my page.–Well,” he went on, wetting the back fold of the sheet with his tongue, so as to be able to fold back the page of thick stamped paper, “well, if you want to play him a trick, tell him that the master can only see his clients between two and three in the morning; we shall see if he comes, the old ruffian!”

It all went all together, the appeal, the gossip, and the conspiracy.

“Given in–Here, Daddy Boucard, what is the date of the order? We must dot our i’s and cross our t’s, by Jingo! it helps to fill the pages.”

“By Jingo!” repeated one of the copying clerks before Boucard, the head clerk, could reply.

“What! have you written by Jingo?” cried Godeschal, looking at one of the novices, with an expression at once stern and humorous.

“Why, yes,” said Desroches, the fourth clerk, leaning across his neighbor’s copy, “he has written, ‘We must dot our i’s’ and spelt it by Gingo!”

All the clerks shouted with laughter.

“Why! Monsieur Hure, you take ‘By Jingo’ for a law term, and you say you come from Mortagne!” exclaimed Simonnin.

“Scratch it cleanly out,” said the head clerk. “If the judge, whose business it is to tax the bill, were to see such things, he would say you were laughing at the whole boiling. You would hear of it from the chief! Come, no more of this nonsense, Monsieur Hure! A Norman ought not to write out an appeal without thought. It is the ‘Shoulder arms!’ of the law.”

“June 1814,” replied the head clerk, without looking up from his work.