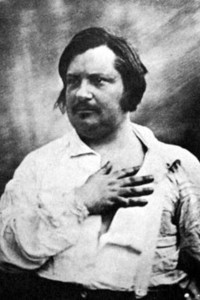 Honoré de Balzac was a French novelist and playwright. His magnum opus was a sequence of almost 100 novels and plays collectively entitled La Comédie humaine, which presents a panorama of French life in the years after the fall of Napoléon Bonaparte in 1815. Due to his keen observation of detail and unfiltered representation of society, Balzac is regarded as one of the founders of realism in European literature. He is renowned for his multi-faceted characters; even his lesser characters are complex, morally ambiguous and fully human. Inanimate objects are imbued with character as well; the city of Paris, a backdrop for much of his writing, takes on many human qualities. His writing influenced many famous authors, including the novelists Marcel Proust, Émile Zola, Charles Dickens, Gustave Flaubert, Marie Corelli, Henry James, Jack Kerouac, and Italo Calvino as well as important philosophers such as Friedrich Engels. Many of Balzac’s works have been made into films, and they continue to inspire other writers.

Before and during his career as a writer, he attempted to be a publisher, printer, businessman, critic, and politician. He failed in all of these efforts. La Comédie Humaine reflects his real-life difficulties, and includes scenes from his own experience. Balzac suffered from health problems throughout his life, possibly due to his intense writing schedule and died in 1850.

The plot for At the Sign of the Cat and Racket, if such a stately name can be given to so delicate a sketch, is of course open to downright British judg...read more »

The story of a French military hero of the Napoleonic Wars, long assumed to be dead, tries to recover his fortune and former wife through the help of a ...read more »

Written in 1846 at the height of Balzac’s powers, this novel portrays the stunningly malevolent Cousin Bette and her intricate plans for revenge against...read more »

This is the question that fills the minds of the inhabitants of Saumur, the setting for Eugénie Grandet, one of the earliest and most famous novels in B...read more »

Pere Goriot is the tragic story of a father whose obsessive love for his two daughters leads to his financial and personal ruin. Interwoven with this th...read more »

This is the third part of the trilogy “The Thirteen”. The story follows the decadent heir Henri de Marsay, who becomes enamored of the titular beauty, P...read more »

Ostensibly a tale of sexual androgyny, the power of love, and its bitter aftermath, this volume is in fact a study of the force of art on society and th...read more »

The Magic Skin (La Peau de chagrin) is set in early 19th-century Paris and tells the story of a young man who finds a magic piece of shagreen that fulfi...read more »