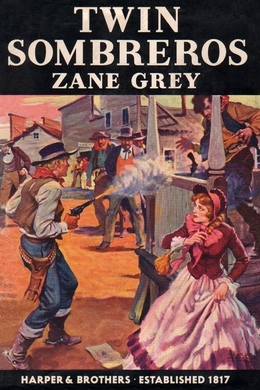 On the first day of spring, a little girl goes looking for the robin that sang to her every day last summer. She sees a bee, a yellow forsythia bush, and a tiny toad, but no robin. Then she hears a cheerful song, and she knows the robin is back.

The sun hung gold and red above the saw-toothed, snow-tipped ramparts of the Colorado Rockies. On a bluff across the sunset-flushed Purgatory River a group of Indians sat their mustangs watching the slow, winding course of a railroad train climbing toward the foothills. Five years had passed since first the iron trail and smoke devil had crossed out of Kansas to the slopes of Colorado; and still the Indians watched and wondered, doubtful of the future, fearful of this clattering whistling monster on wheels that might spell doom to the red man. Had they not seen train after train loaded with buffalo hides steam eastward across the plains?

A lithe rider, dusty and worn, mounted on a superb bay horse, halted on the south side of the river to watch the Indians.

“Utes, I reckon,” he said, answering to the habit of soliloquy that loneliness had fostered in him. “Like the Kiowas they shore die hard. Doggone me if I don’t feel sorry for them! The beaver an’ the buffalo aboot gone! The white man rangin’ with his cattle wherever grass grows! …Wal, Reddies, if yu air wise, yu’ll go way back in some mountain valley an’ stay there.”

The rumble of the railroad train died away and the black snakelike string of cars wound out of sight between bold gray bluffs. A moment longer the Indians lingered, their lean and wild shapes silhouetted against the sky, then they wheeled their ragged mustangs and disappeared in red dust clouds over the ridge.

Brazos Keene’s usual cool and reckless insouciance had suffered a blight. The outcast state he had bitterly avowed was far from new to him. It had been his fate for years to ride the trails from cow camp to ranch, from one cattle town to another. He could not stay long in one place. Always he had been driven. Wherefore the sadness of the hour scarcely had its source in this cowboy wandering. He put a slow hand inside his open vest to draw forth a thick letter, its fresh whiteness marred by fingerprints and sundry soiled spots. He had wept over that letter. Marveling again, with a ghost of the shock which had first attended sight of that beautiful handwriting, he reread the postmark and the address. Lincoln, New Mexico, May 3, 1880. Mr. Brazos Keene, Latimer, Colorado, ℅ Two-bar X Ranch. The Latimer postmark read a day later.

“My Gawd, but this heah railroad can fetch a man trouble pronto,” he complained, and swallowing a lump in his throat he stuck the letter back. “What in the hell made me go into thet post office for? Old cowboy habit! Always lookin’ for letters thet never came. I wish to Gawd this one had been like all the others…. But aw no! … Holly Ripple remembers me—has still the old faith in me … An’ she named her boy Brazos—after me. Aw! thet hurts somethin’ sweet an’ turrible! Shore as I’m forkin’ this hawse heah thet’ll be bad for me … or mebbe good!”

Lost in memory Brazos saw the green river brawling between its gray banks where the willows had a reddish tinge not all from the sunset. A brace of wild ducks winged swift flight over the water; coyotes watched the rider from the slope opposite; the willows shook with the movement of deer or cattle working down to the river; far across the valley on a rising slope black horses showed against the gray. The cold keen air, the fresh odor of the swollen river, the faint color along the brush-lined banks told that the time was early spring. Beyond the Purgatory the land climbed in level benches row on row, always higher and rougher, leading to the gray-ledged ridges, and these in turn to the shaggy foothills that ended abruptly in the mountain wall of slate cliffs and russet slopes and black belts above which the snow crown gleamed white and rose.

“Only five years!” mused the rider, with unseeing eyes on the west. “Five years since I rode along heah down the old trail from Don Carlos’ Rancho … An’ what have I done with my life?”

A savage shake of his head was Brazos’ answer to that disturbing query as also it was a passionate repudiation of memory. It had been his wont in dark hours like this to seek oblivion in the bottle. But with that letter heavy against his heart, with the past vivid and stingingly sweet on him, with the indisputable proof that Holly Ripple’s faith in him would never die, he could not be so base, so treacherous. Not in the hour of his remorse and shame! If he could destroy the letter and forget …but that was vain and futile.

Brazos rode on down the river trail toward Las Animas. He did not know how far it was in to town. His horse was lame and weary. This stretch along the Purgatory was not prolific of cow camps; nevertheless, Brazos hoped to run into one before nightfall.