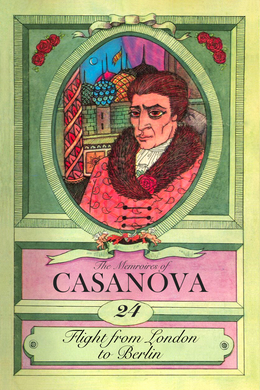 A Letter from Pauline and the Avenging Parrot. I meet Sara again and have the idea of marrying her and settling in Switzerland. Augusta becomes Lord Pembroke’s titular mistress. On the departure of the Hanoverians I balance my accounts before meeting the Baron Stenau. The English Girl, and what she gave me, before my flight from London. Daturi is Beaten by some Soldiers upon which I leave Wesel for Brunswick. I meets the hereditary Prince. My stay at Wolfen-Buttel the Library. After some time with Lord Keith I have an appointment to meet the King in the Garden of Sans-Souci. I go to Mitau and my welcome at the Court, and my administrative journey.

Thus ended the first act of the comedy; the second began the next morning. I was just getting up, when I heard a noise at the street door, and on putting my head out of the window I saw Pocchini, the scoundrel who had robbed me at Stuttgart trying to get into my house. I cried out wrathfully that I would have nothing to do with him, and slammed down my window.

A little later Goudar put in an appearance. He had got a copy of the St. James’s Chronicle, containing a brief report of my arrest, and of my being set a liberty under a bail of eighty guineas. My name and the lady’s were disguised, but Rostaing and Bottarelli were set down plainly, and the editor praised their conduct. I felt as if I should like to know Bottarelli, and begged Goudar to take me to him, and Martinelli, happening to call just then, said he would come with us.

We entered a wretched room on the third floor of a wretched house, and there we beheld a picture of the greatest misery. A woman and five children clothed in rags formed the foreground, and in the background was Bottarelli, in an old dressing-gown, writing at a table worthy of Philemon and Baucis. He rose as we came in, and the sight of him moved me to compassion. I said,–

“I am Casanova, against whom you bore false witness; whom you tried to cast into Newgate.”

“I am very sorry, but look around you and say what choice have I? I have no bread to give my children. I will do as much in your favour another time for nothing.”

“Are you not afraid of the gallows?”

“No, for perjury is not punished with death; besides it is very difficult to prove.”

“I have heard you are a poet.”

“Yes. I have lengthened the Didone and abridged the Demetrio.”

“You are a great poet, indeed!”

I felt more contempt than hatred for the rascal, and gave his wife a guinea, for which she presented me with a wretched pamphlet by her husband: “The Secrets of the Freemasons Displayed.” Bottarelli had been a monk in his native city, Pisa, and had fled to England with his wife, who had been a nun.

About this time M. de Saa surprised me by giving me a letter from my fair Portuguese, which confirmed the sad fate of poor Clairmont. Pauline said she was married to Count Al—-. I was astonished to hear M. de Saa observe that he had known all about Pauline from the moment she arrived in London. That is the hobby of all diplomatists; they like people to believe that they are omniscient. However, M. de Saa was a man of worth and talent, and one could excuse this weakness as an incident inseparable from his profession; while most diplomatists only make themselves ridiculous by their assumption of universal knowledge.

M. de Saa had been almost as badly treated by the Charpillon as myself, and we might have condoled with one another, but the subject was not mentioned.

A few days afterwards, as I was walking idly about, I passed a place called the Parrot Market. As I was amusing myself by looking at these curious birds, I saw a fine young one in a cage, and asked what language it spoke. They told me that it was quite young and did not speak at all yet, so I bought it for ten guineas. I thought I would teach the bird a pretty speech, so I had the cage hung by my bed, and repeated dozens of times every day the following sentence: “The Charpillon is a bigger wh– e than her mother.”

The only end I had in view was my private amusement, and in a fortnight the bird had learnt the phrase with the utmost exactness; and every time it uttered the words it accompanied them with a shriek of laughter which I had not taught it, but which made me laugh myself.

One day Gondar heard the bird, and told me that if I sent it to the Exchange I should certainly get fifty guineas for it. I welcomed the idea, and resolved to make the parrot the instrument of my vengeance against the woman who had treated me so badly. I secured myself from fear of the law, which is severe in such cases, by entrusting the bird to my negro, to whom such merchandise was very suitable.

For the first two or three days my parrot did not attract much attention, its observations being in French; but as soon as those who knew the subject of them had heard it, its audience increased and bids were made. Fifty guineas seemed rather too much, and my negro wanted me to lower the price, but I would not agree, having fallen in love with this odd revenge.