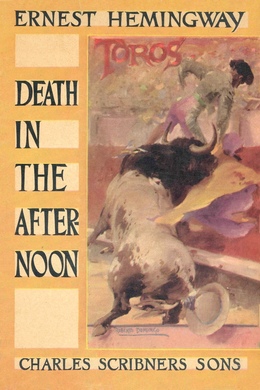 Death in the Afternoon

Still considered one of the best books ever written about bullfighting, this is an impassioned look at the sport by one of its true aficionados. It reflects Hemingway’s conviction that bullfighting was more than mere sport and reveals a rich source of inspiration for his art. The unrivaled drama of bullfighting, with its rigorous combination of athleticism and artistry, and its requisite display of grace under pressure, ignited Hemingway’s imagination. Here he describes and explains the technical aspects of this dangerous ritual and “the emotional and spiritual intensity and pure classic beauty that can be produced by a man, an animal, and a piece of scarlet serge draped on a stick.” Seen through his eyes, bullfighting becomes a richly choreographed ballet, with performers who range from awkward amateurs to masters of great elegance and cunning. A fascinating look at the history and grandeur of bullfighting, Death in the Afternoon is also a deeper contemplation of the nature of cowardice and bravery, sport and tragedy, and is enlivened throughout by Hemingway’s sharp commentary on life and literature.

At the first bullfight I ever went to I expected to be horrified and perhaps sickened by what I had been told would happen to the horses. Everything I had read about the bull ring insisted on that point; most people who wrote of it condemned bullfighting outright as a stupid brutal business, but even those that spoke well of it as an exhibition of skill and as a spectacle deplored the use of the horses and were apologetic about the whole thing. The killing of the horses in the ring was considered indefensible. I suppose, from a modern moral point of view, that is, a Christian point of view, the whole bullfight is indefensible; there is certainty much cruelty, there is always danger, either sought or unlooked for, and there is always death, and I should not try to defend it now, only to tell honestly the things I have found true about it. To do this I must be altogether frank, or try to be, and if those who read this decide with disgust that it is written by some one who lacks their, the readers’, fineness of feeling I can only plead that this may be true. But whoever reads this can only truly make such a judgment when he, or she, has seen the things that are spoken of and knows truly what their reactions to them would be.

Once I remember Gertrude Stein talking of bullfights spoke of her admiration for Joselito and showed me some pictures of him in the ring and of herself and Alice Toklas sitting in the first row of the wooden barreras at the bull ring at Valencia with Joselito and his brother Gallo below, and I had just come from the Near East, where the Greeks broke the legs of their baggage and transport animals and drove and shoved them off the quay into the shallow water when they abandoned the city of Smyrna, and I remember saying that I did not like the bullfights because of the poor horses. I was trying to write then and I found the greatest difficulty, aside from knowing truly what you really felt, rather than what you were supposed to feel, and had been taught to feel, was to put down what really happened in action; what the actual things were which produced the emotion that you experienced. In writing for a newspaper you told what happened and, with one trick and another, you communicated the emotion aided by the element of timeliness which gives a certain emotion to any account of something that has happened on that day; but the real thing, the sequence of motion and fact which made the emotion and which would be as valid in a year or in ten years or, with luck and if you stated it purely enough, always, was beyond me and I was working very hard to try to get it. The only place where you could see life and death, i.e., violent death now that the wars were over, was in the bull ring and I wanted very much to go to Spain where I could study it. I was trying to learn to write, commencing with the simplest things, and one of the simplest things of all and the most fundamental is violent death. It has none of the complications of death by disease, or so-called natural death, or the death of a friend or some one you have loved or have hated, but it is death nevertheless, one of the subjects that a man may write of. I had read many books in which, when the author tried to convey it, he only produced a blur, and I decided that this was because either the author had never seen it clearly or at the moment of it, he had physically or mentally shut his eyes, as one might do if he saw a child that he could not possibly reach or aid, about to be struck by a train. In such a case I suppose he would probably be justified in shutting his eyes as the mere fact of the child being about to be struck by the train was all that he could convey, the actual striking would be an anti-climax, so that the moment before striking might be as far as he could represent. But in the case of an execution by a firing squad, or a hanging, this is not true, and if these very simple things were to be made permanent, as, say, Goya tried to make them in Los Desastros de la Guerra, it could not be done with any shutting of the eyes. I had seen certain things, certain simple things of this sort that I remembered, but through taking part in them, or, in other cases, having to write of them immediately after and consequently noticing the things I needed for instant recording, I had never been able to study them as a man might, for instance, study the death of his father or the hanging of some one, say, that he did not know and would not have to write of immediately after for the first edition of an afternoon newspaper.