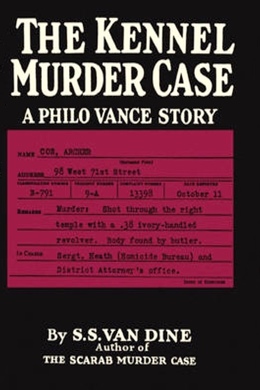 It was exactly three months after the startling termination of the Scarab murder case* that Philo Vance was drawn into the subtlest and the most perplexing of all the criminal problems that came his way during the four years of John F.-X. Markham’s incumbency as District Attorney of New York County.

It was exactly three months after the startling termination of the Scarab murder case that Philo Vance was drawn into the subtlest and the most perplexing of all the criminal problems that came his way during the four years of John F.-X. Markham’s incumbency as District Attorney of New York County.

Indeed, so mystifying was this case, so apparently inexplicable were its conflicting elements, that the police were for adding it to their list of unsolved murder mysteries. And they would have been justified in their decision; for rarely in the annals of modern crime has there been a case that seemed to reverse so completely the rational laws by which humanity lives and reasons. In the words of the doughty and practical Sergeant Ernest Heath of the Homicide Bureau, the case “didn’t make sense.” On the surface it smacked of strange and terrifying magic, of witch-doctors and miracle-workers; and every line of investigation ran into a blank wall.

In fact, the case had every outward appearance of being what arm-chair criminologists delight in calling the perfect crime. And, to make the plotting of the murderer even more mystifying, a diabolical concatenation of circumstances was superimposed upon the events by some whimsical and perverse god, which tended to strengthen every weak link in the culprit’s chain of ratiocination, and to turn the entire bloody affair into a maze of incomprehensibility.

Curiously enough, however, it was the very excess of ardor on the part of the murderer when attempting to divert suspicion, that created a minute hole in the wall of mystery, through which Vance was able to see a glimmer of light. In the process of following that light to the truth, Vance did what I believe was the shrewdest and profoundest detective work of his career. It was his peculiar knowledge of special and out-of-the-way facts, combined with his almost uncanny perception of human nature, that made it possible for him to seize upon apparently unimportant clues and resolve them into a devastating syllogism.

Vance for years had been a breeder of Scottish terriers. His kennels were in New Jersey, an hour’s ride from New York, and he spent much of his time there studying pedigrees, breeding for certain characteristics which he believed essential to the ideal terrier, and watching the results of his theories. Sometimes I think he manifested a greater enthusiasm in his dogs than in any other recreative phase of his life; and the only time I have seen evidences of a thrill in his eyes comparable to that when he had unearthed and acquired a magnificent Cézanne water-color or discovered a rare piece of Chinese ceremonial jade in a mass of opaque modern recuttings, was when one of his dogs went up to Winners.

I mention this fact—or idiosyncrasy, if you prefer—because it so happened that Vance’s ability to look at a certain stray Scottish terrier and recognize its blood-lines and show qualities, was what led him to one phase of the truth in the remarkable case which I am now recording.

That which led Vance to another important phase of the truth was his knowledge of Chinese ceramics. He possessed, in his home in East 88th Street, a small but remarkable collection of Chinese antiquities—museum pieces he had acquired in his extensive travels—and had written various articles for Oriental and art journals on the subject of Sung and Ming monochrome porcelains.

Scotties and Chinese ceramics! A truly unusual combination. And yet, without a knowledge of these two antipodal interests, the mysterious murder of Archer Coe, in his old brownstone house in West 71st Street, would have remained a closed book for all time.

The opening of the case was rather tame: it promised little in the line of sensationalism. But within an hour of the telephone call Markham received from the Coe butler, the District Attorney’s office and the New York Police Department were plunged into one of the most astounding and baffling murder mysteries of our day.

It was shortly after half-past eight on the morning of October 11, that Vance’s door-bell rang; and Currie, his old English valet and majordomo, ushered Markham into the library. I was temporarily installed in Vance’s duplex roof-garden apartment at the time. There was much legal and financial work to be done—an accumulation of months, for Vance had insisted that I accompany him on the Mediterranean cruise he took immediately after the solving of the Scarab murder. For years, almost since our Harvard days, I had been Vance’s legal adviser and monetary steward (a post which included as much of friendship as of business) and his affairs kept me fairly busy—so busy, in fact, that a two months’ interregnum meant much overtime labor afterwards.