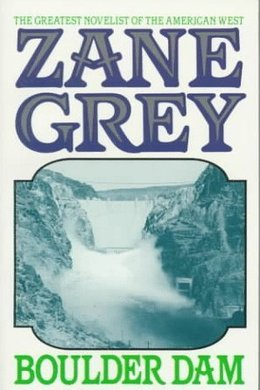 Zane Grey is at his best in this story of the building of the Boulder Dam ( Later renamed the Hoover Dam). It shows an excellent depiction of early day Las Vegas and the people who built the dam. Of course there is the damsel in distress and the hero who gives up all to start his life anew.

It was early in the evening of a spring night in Las Vegas, Nevada, 1932. The town roared with thousands of workers in from Boulder Dam to buck the tiger and have themselves a good time.

No Western town during the gold rush or the later frontier days could have held a candle to this modern wide-open city, which owed its mushroom growth and boom business to the great government project of damming the Colorado River.

Throngs of men paraded up and down the pavements under the glare of brilliant neon lights that turned night into day along the wide main street. The scene resembled Broadway on New Year’s Eve, except for the horns and hilarity. This Boulder Dam crowd was noisy enough, but grim and hoarse, with the stride of men not easily brushed aside from the intent visible in gleaming eyes and on bronzed faces. A steady stream passed to and fro, congested and blocked every little way before the swinging doors of the gambling palaces.

Lynn Weston, young Californian, stood outside the Monte Palace, indulging in his peculiar penchant for watching the passers-by. This habit had grown in Lynn during his frequent visits in from Boulder Dam. He belonged to this heterogeneous throng, and for the endless year of his toil at the dam he had been actuated by their common weakness for excitement and oblivion, yet in his way he was a lone wolf. The ignominy of the catastrophe that had forced him into the ranks of these raw workers weighed upon him less and less as time went on, and unaccustomed hard labor had begun its mysterious alchemy of change in him. Disappointment at unrealized opportunity for his ambition and bitterness at the misfortune of not completing his engineering course at college both had somewhat lost their sting. College man, famous football player, scion of an old California family whom the depression had reduced to unfamiliar and insupportable straits, and lastly a jilted lover who had welcomed his dismissal but who chafed under the shame of it, Lynn Weston looked on the passing throngs with slowly clarifying eyes, an awakening mind, and a strange sense that the something evermore about to happen to him was due. This mood never troubled him through the strenuous hours of rough labor, nor when he looked upon red liquor and the bright face of the gamblers’ lure.

With a shrug of his broad shoulders Lynn went into the Palace. The glaring hall was full of a blue haze of smoke, the sound of men’s voices, the clink of silver coins and the rattle of roulette wheels. Men stood ten deep around the gambling games. As Lynn elbowed his way back toward the rear his keen sight met the same weathered visages of his fellow workers and the same pale-faced, hard-eyed, thin-lipped parasites he was used to seeing there. In the rear of this long hall he knew where and how to get the bottle that had become a habit and which he despised for the very thing he found in it. Here in the rear lounged men for whom Lynn had no name but whom he always wanted to beat down and throw into the dirt. They were the dregs of humanity, outcasts, criminals, hopheads, men of a type he had taken care not to meet in the dark.

At length Lynn found a vacant chair at one of the poker tables, but the players there were too slick for him, and after dropping ten dollars he quit. He lost at monte too, and the big roulette wheel reduced his month’s wages to a five-dollar bill. Lynn was gambler enough to grow cooler as luck held aloof. But he had another stiff drink.

At the faro table the fickle goddess of fortune smiled upon him. Lynn knew this dealer and that the game was crooked, but with the perversity of a gambler who was winning he kept backing his luck. And it stayed with him until he was far ahead. This was the time to quit. But Lynn was reluctant to turn his back upon a game that owed him much and which he wanted to beat, as much perhaps to get even with the crooked house as to square accounts. So he took another whirl at the game. This time Lynn’s sharp trained eye caught the dealer in a flagrant bit of cheating. Quick as a flash he snatched at the dexterous white hand and with a wrench turned up the cupped palm. The dealer let out a half-stifled cry of pain and anger.

“Caught with the goods, Hevron!” Lynn rasped out piercingly, and he held the trapped hand for players and spectators to see. “There, plain as your hawk nose! This is the second time. If I hadn’t beat your rotten game I’d take a sock at your ugly mug…. Here, cash these.”

With lowered face clouded and ashen, Hevron made the exchange with white hands less dexterous than nervous.

“No, I’m not drunk,” returned Lynn. “You pulled a crooked trick. Some of these men saw it. You’re crooked. This joint is the crookedest in Las Vegas. Everybody knows it. I was a sucker to come in here. But I’m even now, and I never will come back.”