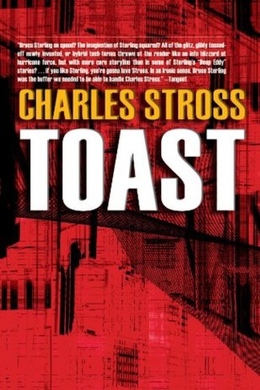 And Other Rusted Futures

Toast is a collection of science fiction short stories first published in 2002. The subtitle of the collection refers to the way that predictions of the future in SF stories become rapidly obsolete by the progress of actual events. For example, the 1995 story Ship of Fools was a prediction of disaster due to the Y2K problem, that did not come to pass. Contents: Antibodies, Bear Trap, A Colder War, Toast: A Con Report, Extracts from the Club Diary, A Boy and His God, Ship of Fools, Dechlorinating the Moderator, Yellow Snow, Big Brother Iron.

Everyone remembers where they were and what they were doing when a member of the great and the good is assassinated. Ghandi, the Pope, Thatcher—if you were old enough you remembered where you were when you heard, the ticker-tape of history etched across your senses. You can kill a politician but their ideas usually live on. They have a life of their own. How much more dangerous, then, the ideas of mathematicians?

I was elbow-deep in an eviscerated PC, performing open heart surgery on a diseased network card, when the news about the traveling salesman theorem came in. Over on the other side of the office John’s terminal beeped, notification of incoming mail. A moment later my own workstation bonged.

I carried on screwing the card back into its chassis. John is not a priority interrupt.

“Someone’s come up with a proof that NP-complete problems lie in P! There’s a posting in comp.risks saying they’ve used it to find an O*(n2) solution to the traveling salesman problem, and it scales! Looks like April First has come early this year, doesn’t it?”

I dropped the PC’s lid on the floor hastily and sat down at my workstation. Another cubed-sphere hypothesis, another flame war in the math newsgroups—or something more serious? “When did it arrive?” I called over the partition. Soroya, passing my cubicle entrance with a cup of coffee, cast me a dirty look; loud voices aren’t welcome in open-plan offices.

“This just in,” John replied. I opened up the mailtool and hit on the top of the list, which turned out to be a memo from HR about diversity awareness training. No, next … they want to close the smoking room and make us a 100% tobacco-free workplace. Hmm. Next.

Forwarded email: headers bearing the spoor of a thousand mail servers, from Addis-Ababa to Ulan Bator. Before it had entered our internal mail network it had travelled from Taiwan to Rochester NJ, then to UCB in the Bay Area, then via a mailing list to all points; once in-company it had been bounced to everyone in engineering and management by the first recipient, Eric the Canary. (Eric is the departmental plant. Spends all the day webdozing for juicy nuggets of new information if you let him. A one-man wire service: which is why I always ended up finishing his jobs.)

I skimmed the message, then read it again. Blinked. This kind of stuff is heavy on the surreal number theory: about as digestible as an Egyptian mummy soaked in Tabasco sauce for three thousand years. Then I poked at the web page the theorem was on:

Someone or something was hitting on the web server with the proof; I figured it had to be all the geeks who’d caught wind of the chain letter so far. My interest was up, so I hit the “reload” button, and something else came up on screen.

Lots of theorems—looked like the same stuff as the email, only this time with some fun graphics. Something tickled my hindbrain then, and I had to bite my lip to keep from laughing. Next thing, I hit the print button and the inkjet next to my desk began to mutter and click. There was a link near the bottom of the page to the author’s bibliography, so I clicked on that and the server threw another “go away, I’m busy” error. I tugged my beard thoughtfully, and instead of pressing “back” I pressed “reload.”

The browser thought to itself for a bit—then a page began to appear on my screen. The wrong page. I glanced at the document title at the top and froze:

THE PAGE AT THIS LOCATION HAS BEEN WITHDRAWN.

Please enter your e-mail address if you require further information.