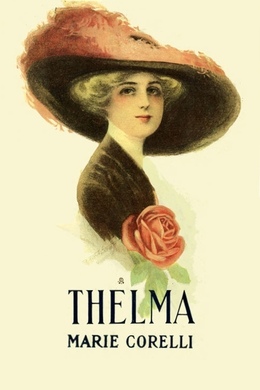 A sweet and tender love story, that must have thrilled the closet Victoria readers of the time. Thelma is loved by many men including her fathers right-hand man, who sacrifices his life for her. However it is not him who marry’s her and sweeps her away from Norway.

Midnight,–without darkness, without stars! Midnight–and the unwearied sun stood, yet visible in the heavens, like a victorious king throned on a dais of royal purple bordered with gold. The sky above him,–his canopy,–gleamed with a cold yet lustrous blue, while across it slowly flitted a few wandering clouds of palest amber, deepening, as they sailed along, to a tawny orange. A broad stream of light falling, as it were, from the centre of the magnificent orb, shot lengthwise across the Altenfjord, turning its waters to a mass of quivering and shifting color that alternated from bronze to copper,–from copper to silver and azure. The surrounding hills glowed with a warm, deep violet tint, flecked here and there with touches of bright red, as though fairies were lighting tiny bonfires on their summits. Away in the distance a huge mass of rock stood out to view, its rugged lines transfigured into ethereal loveliness by a misty veil of tender rose pink,–a hue curiously suggestive of some other and smaller sun that might have just set. Absolute silence prevailed. Not even the cry of a sea-mew or kittiwake broke the almost deathlike stillness,–no breath of wind stirred a ripple on the glassy water. The whole scene might well have been the fantastic dream of some imaginative painter, whose ambition soared beyond the limits of human skill. Yet it was only one of those million wonderful effects of sky and sea which are common in Norway, especially on the Altenfjord, where, though beyond the Arctic circle, the climate in summer is that of another Italy, and the landscape a living poem fairer than the visions of Endymion.

There was one solitary watcher of the splendid spectacle. This was a man of refined features and aristocratic appearance, who, reclining on a large rug of skins which he had thrown down on the shore for that purpose, was gazing at the pageant of the midnight sun and all its stately surroundings, with an earnest and rapt expression in his clear hazel eyes.

“Glorious! beyond all expectation, glorious!” he murmured half aloud, as he consulted his watch and saw that the hands marked exactly twelve on the dial. “I believe I’m having the best of it, after all. Even if those fellows get the Eulalie into good position they will see nothing finer than this.”

As he spoke he raised his field-glass and swept the horizon in search of a vessel, his own pleasure yacht,–which had taken three of his friends, at their special desire, to the opposite island of Seiland,–Seiland, rising in weird majesty three thousand feet above the sea, and boasting as its chief glory the great peak of Jedkè, the most northern glacier in all the wild Norwegian land. There was no sign of a returning sail, and he resumed his study of the sumptuous sky, the colors of which were now deepening and burning with increasing lustre, while an array of clouds of the deepest purple hue, swept gorgeously together beneath the sun as though to form his footstool.