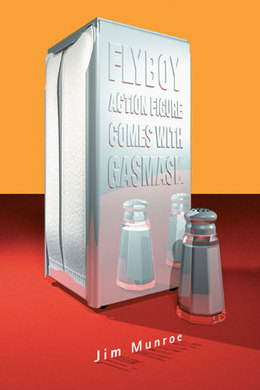 Ryan is a university student dealing with the normal problems of a 22-year-old guy – shyness, virginity, weird roommates, and a massive crush on Cassandra, a waitress at his local greasy spoon. (Oh, and a freakish ability to change into a fly.) When he finally gets up the nerve to ask Cassandra for a date, he learns that the two have more in common than they first thought. (Turns out that Cassandra can make things disappear.) Sharing their secrets for the first time, Ryan and Cassandra realize they were made for each other…and to battle forces of evil! Inspired by Sailor Moon, they team up to fight the villians in their own backyard, taking on cigarette barons, right wing newspapers, and the overzealous local police. But can the Superheroes for Social Justice transform the world in time? Find out in…

Before the time with Cass, I had only come close to doing it once since childhood. This all happened during my first year at the University of Toronto, characterized by predictable drunken stupidity. I was again unpleasantly soused, slumped in a chair in what looked to be a nice kitchen. It was hard to tell, because there was only a candle for light, so as to give the room the legislated party ambience. Specifically, it was a party full of people I didn’t know.

Regardless, I did want to know the girl with the short black hair and wine glass. She was listening to this guy go on about his film project, nodding every so often and smiling in inappropriate places. I remember smiling back, half-hoping half-dreading she’d catch me. I wished he’d shut up so I could hear her talk.

The kitchen wasn’t crowded, which was lucky considering what eventually happened. Just two or three pairs of conversationalists. Someone pulled up her plaid sleeve and presented her forearm to the candle flame. There was a wrench tattooed there, and when she flexed her muscle it wiggled.

“Bilbo the Dancing Monkeywrench,” she said to her friend. Her friend laughed and raised her glass to Bilbo.

“This must be the party-trick segment of the evening,” Film Guy said. He stepped back for effect, cracked his knuckles and bent his thumb all the way back.

It was funny he’d do that, because I often thought of my ability as a kind of extreme version of bending my thumb back — ugly, unnatural and ultimately useless.

“Oh bra_vo_ ,” I muttered, but not quietly enough.

Black-haired girl looked at me. “Well,” she said, “what can you do?”

I hauled myself to a standing position. “Me?” I asked her, watching the candlelight on her face. I noticed her mascara was fucked up, and liked her more for it. Everyone else was shadows, silent watchers.

And I was really going to do it. I really was. I took a breath and prepared to step out of myself.

Instead, I turned my head away and puked explosively onto the formica table I had been sitting at. The candle fell over and went out.

Dazed, I leaned over the table, looking at the mess I’d made. I dry-heaved, went to sit on the chair again and missed. Busted my lip wide open on the metal table leg on my way down.

“Do you think he was aiming for the candle?”

There was a wave of laughter and my consciousness seemed to be borne out on it. I was grateful.

I had a crush on this waitress at the diner near my house. She was splashy generous with the coffee, so I found myself at Sok quite a bit during the winter.

“Haven’t seen you in a while,” Cass said, passing by with a breakfast plate.

At first I didn’t think she was talking to me. Coffee and convenient location aside, Cass was the biggest attraction at Sok, and now she wasn’t an exhibit any longer. Now I had to talk to her, an exciting and nerve-racking thing. Witty repartee only comes easily to me when I’m with friends. It wasn’t coming now, naturally, because I was thinking of it as flirting.

“I like the patios in the summer,” I said lamely as she passed. My coffee, the fourth, was mostly finished, and she filled it without asking.

“What was stopping you from taking a chair and sitting out front, like Frank?” she said, her eyebrows arching as she nodded towards an old Italian guy. Despite the unpleasant weather, he sat outside, a winter-steam tendril growing out of his head.

“That’s what those patios are,” Cass retorted. “Gawk Central.”

“Nuh-uh,” I said. I had put some thought into it. “It’s a different dynamic. If there’s a crowd of people doing anything, then it’s OK. Like dancing. All together, there’s a mass delusion that swinging your limbs around like that is all right. But if someone’s shakin’ their booty in a bank line-up —”

“Nutbar,” she said, grinning with one side of her mouth.

There was a pause. In that pause, I thought two-and-one-half things. Because it’d be a crime against humanity if you don’t, lookin’ the way you do , and Oh, I think she thinks I’m leading up to asking her out to go dancing , and Oh dear, should I? how very stressful —

“It’s all right,” she said, giving me a sideways look that I was utterly unable to decipher. She sauntered away in that way I so admired, getting some old guy his check.

Admission: up until that day, my admiration of her was based mostly on her body. She would wear these track pants and T-shirt combinations that tried to contain those heavy breasts, tried to hide her wonderful bum, but failed delightfully. I had always considered voluptuous a polite euphemism, but then I met Cass.