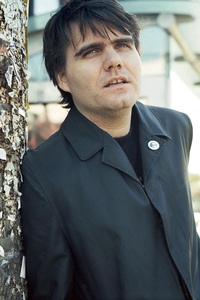 Munroe is a Canadian science fiction author, who publishes his works independently under the imprint No Media Kings. He was managing editor at the magazine Adbusters in the 1990s, before publishing his debut novel Flyboy Action Figure Comes With Gasmask in 1999. The following he release Angry Young Spaceman through his No Media Kings imrpint and, in the U.S., Four Walls Eight Windows. A couple of years later he published Everyone in Silico, which was promoted partly by Munroe’s attempt to invoice corporations mentioned in the novel for product placement. Munroe’s most recent books are graphic novels set in post-Rapture Chicago and Detroit.

Munroe was the founder of Perpetual Motion Roadshow, a North American indie touring circuit that sent 100 writers, performers and musicians on the road between 2003-2007. A former video games columnist for Eye Weekly, he is a founding board member of the Hand Eye Society and has produced projects such as the Torontron.

In Vancouver in 2036, people are tired of the rain. They’re willing to give up a lot for guaranteed sunshine, a life with no wasted hours. A life free o...read more »

Ryan is a university student dealing with the normal problems of a 22-year-old guy – shyness, virginity, weird roommates, and a massive crush on Cassand...read more »