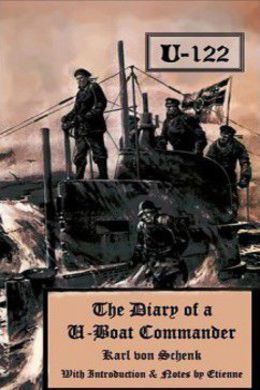 The Diary of a U-boat Commander

The diary of a World War One U-Boat commander. As well as being a fascinating glimpse of life on the German U-boats during the intense submarine blockade, this also reminds us there were humans involved - on both sides of the action - as we read too of the intimate thoughts and intense love of a man longing for his sweetheart.

“I would ask you a favour,” said the German captain, as we sat in the cabin of a U-boat which had just been added to the long line of bedraggled captives which stretched themselves for a mile or more in Harwich Harbour, in November, 1918.

I made no reply; I had just granted him a favour by allowing him to leave the upper deck of the submarine, in order that he might await the motor launch in some sort of privacy; why should he ask for more?

Undeterred by my silence, he continued: “I have a great friend, Lieutenant-zu-See Von Schenk, who brought U.122 over last week; he has lost a diary, quite private, he left it in error; can he have it?”

I deliberated, felt a certain pity, then remembered the Belgian Prince and other things, and so, looking the German in the face, I said:

I shook my head, then, to my astonishment, the German placed his head in his hands and wept, his massive frame (for he was a very big man) shook in irregular spasms; it was a most extraordinary spectacle.

It seemed to me absurd that a man who had suffered, without visible emotion, the monstrous humiliation of handing over his command intact, should break down over a trivial incident concerning a diary, and not even his own diary, and yet there was this man crying openly before me.

It rather impressed me, and I felt a curious shyness at being present, as if I had stumbled accidentally into some private recess of his mind. I closed the cabin door, for I heard the voices of my crew approaching.

He wept for some time, perhaps ten minutes, and I wished very much to know of what he was thinking, but I couldn’t imagine how it would be possible to find out.

I think that my behaviour in connection with his friend’s diary added the last necessary drop of water to the floods of emotion which he had striven, and striven successfully, to hold in check during the agony of handing over the boat, and now the dam had crumbled and broken away.

It struck me that, down in the brilliantly-lit, stuffy little cabin, the result of the war was epitomized. On the table were some instruments I had forbidden him to remove, but which my first lieutenant had discovered in the engineer officer’s bag.

On the settee lay a cheap, imitation leather suit-case, containing his spare clothes and a few books. At the table sat Germany in defeat, weeping, but not the tears of repentance, rather the tears of bitter regret for humiliations undergone and ambitions unrealized.

We did not speak again, for I heard the launch come alongside, and, as she bumped against the U-boat, the noise echoed through the hull into the cabin, and aroused him from his sorrows. He wiped his eyes, and, with an attempt at his former hardiness, he followed me on deck and boarded the motor launch.

Next day I visited U.122, and these papers are presented to the public, with such additional remarks as seemed desirable; for some curious reason the author seems to have omitted nearly all dates. This may have been due to the fear that the book, if captured, would be of great value to the British Intelligence Department if the entries were dated. The papers are in the form of two volumes in black leather binding, with a long letter inside the cover of the second volume.

Internal evidence has permitted me to add the dates as regards the years. My thanks are due to K. for assistance in translation.